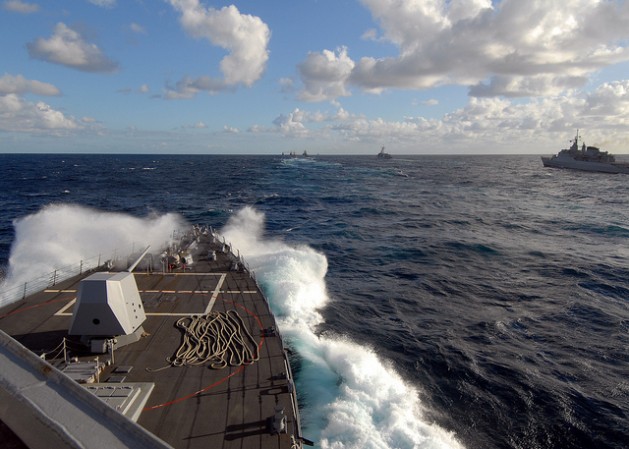 LOST, which has been ratified by 161 countries and the European Union, sets rules governing most areas of ocean policy. Credit:U.S. Navy photo

WASHINGTON, Jun 7 2012 (IPS) - Given the wide range of its supporters – everyone from the U.S. Chamber of Commerce and the Joint Chiefs of Staff of the U.S. Armed Forces to Greenpeace – one would think that Senate ratification of the 1982 Law of the Sea Treaty (LOST) would be a slam dunk.

The fact that it isn’t testifies to the degree to which forces of the U.S. far right have maintained or strengthened their hold on the Republican Party and to the abiding strength of the kind of aggressive and unilateral nationalism that dominated the first terms of former Presidents Ronald Reagan and George W. Bush.

Since the launch last month of a major campaign by big business, the Pentagon and Senate Foreign Relations Committee Chairman John Kerry to gain LOST’s ratification, some two dozen Republican senators have signalled their opposition.

Only 34 are needed to kill it. The U.S. constitution requires that two-thirds of the 100-member chambre must vote “aye” to ratify a treaty.

The presumptive Republican presidential nominee, Mitt Romney, has so far been silent. But in his 2008 campaign, the former Massachusetts governor, who was then running as a “moderate”, said he had “concerns” about the treaty’s “giving unaccountable international institutions more power”.

If pressed to take a position before the election, treaty supporters are worried he’ll oppose it.

That is one reason why Kerry intends to delay a vote on the treaty in his committee until after the November election when partisan passions – currently on the boil and rising fast – may cool.

The product of some 15 years of negotiations, LOST, which has been ratified by 161 countries and the European Union, sets rules governing most areas of ocean policy, including navigation and over- flight rights, exploitation of the seabed, conservation and research.

Successive administrations – both Democratic and Republican – led negotiations for the treaty from the late 1960s onward. But when completed in 1982, then-President Ronald Reagan, under pressure from big U.S. mining and energy companies, rejected it, citing its provisions for deep-sea mining, particularly its requirement that mining claims be regulated by a Jamaica-based International Seabed Authority (ISA).

Nonetheless, Reagan ordered the government to abide by all other sections of the treaty, which amounted essentially to a codification of existing international customary and maritime international law.

In 1994, the seabed provisions of the treaty were amended to satisfy Reagan’s objections. Both Bill Clinton and George W. Bush – the latter, however, only in his second term – subsequently supported its ratification. In 2007, it was approved by the Senate Foreign Relations Committee by a lopsided 17-4 vote but was never sent to the floor for final action.

After Obama took office in 2009, his administration listed LOST as one of a half-dozen treaties, including the 1979 Convention on the Elimination of Discrimination Against Women (which has been ratified by 185 countries), as priorities for ratification.

None, however, have yet made any headway on Capitol Hill due to opposition by Republicans, a growing number of whom have argued that international treaties unduly constrain Washington’s freedom of action in the world and threaten its sovereignty.

All branches of the U.S. armed services, particularly the Navy, have long supported the treaty because of its recognition of navigation rights for vessels engaged in military activities. In addition, the same U.S. mining and energy interests that had previously opposed the treaty because of its possible interference with deep-sea drilling or mining have also now lined up in favour.

It was Pentagon chief Leon Panetta who launched the new ratification campaign at a Law of the Sea symposium May 9 and who later appeared with the chiefs of all four armed services, as well as Secretary of State Hillary Clinton, to testify in favour of the treaty before Kerry’s committee two weeks later.

“(T)his treaty is absolutely critical to U.S. national security …the longer we delay, the more we undermine our own national security interests,” said Panetta, who this week urged Washington’s Asian allies worried about China’s territorial claims in the South China Sea at the Shangri-La Defence Dialogue in Singapore to speak out in support of ratification.

Similarly, U.S. oil, gas, and mining industries that have developed new technology to exploit the deep seabed, as well as telecommunications companies that rely on undersea cables, have come out strongly for ratification, insisting that U.S. adherence to the treaty would not only offer them greater security in undertaking such expensive investments, but also give Washington a voice in managing the ISA.

“Accession would provide American businesses certainty and legal equality to the largest of the Exclusive Economic Zones (EEZ) available under (LOST), and the corresponding natural resources and shipping rights of way,” according to R. Bruce Josten, executive vice president of the U.S. Chamber of Commerce.

“(It) would also provide much-needed certainty and predictability to claims of control over territory in the Arctic, enhancing our national security, (and) … protect U.S. claims to the vast natural resources contained on the ocean floor.”

Nonetheless, the treaty’s foes have launched a counter-campaign led mainly by the far-right Heritage Foundation and the neo-conservative Centre for Security Policy (CSP).

Writing in the Los Angeles Times Tuesday, Heritage’s Edwin Meese, who served as Reagan’s attorney-general and long-time confidant, insisted that his former boss would still oppose ratification and suggested that LOST was part of a broader effort to undermine U.S. sovereignty.

“To secure navigational freedom, territorial rights and all national and international interests addressed in LOST,” he wrote, “we must maintain the strength of the U.S. Navy, not look to an anachronistic pact that is intent on advancing a one-world agenda.”

The notion that the Navy, rather than a “piece of paper”, should act as the guarantor of U.S. maritime interests has been echoed by far- right senators.

“The Senate should reject this dangerous hand over of U.S. sovereignty. Instead, it should provide the Navy with the resources necessary to keep it the best force on the high seas,” wrote three of them Politico last month. Treaty supporters, on the other hand, were buoyed by the tentative endorsement offered by Sen. John McCain, who had opposed the treaty during his 2008 presidential campaign, as well as by a strong op-ed by the last five living former Republican secretaries of state, including Henry Kissinger and George Shultz, published in the Wall Street Journal last week.

“We have been on the sidelines long enough,” they wrote. “Now is the time to get on the field and lead.”

Much of the pro-treaty efforts is being coordinated by a coalition called the “National Security Steering Committee” and chaired by former Republican Sen. and Secretary of the Navy, John Warner. It has launched what it calls, somewhat provocatively, “The American Sovereignty Campaign” and a website, “ratifythetreatynow.org”.

A spokesman for the group, Jeffrey Pike, described the concerns of the treaty’s foes as “silly” and stressed that ratification “will actually strengthen and expand our sovereignty”.

“We’ve been losing it and we need to regain it,” he told IPS, adding, “The urgency and the push and desire from the business community for ratification have never been greater.”

That’s as it should be, said one insider, the head of a large grassroots group that lobbies for greater international co-operation, who spoke on background. “Right now, the target audience on this is about 15 Republican senators” – or about a third of the party’s Senate caucus. “The military and industry are the only people who are going be able to sway these (senators).”