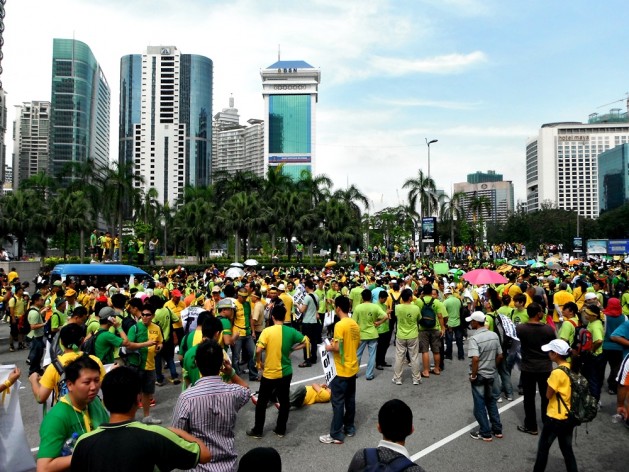 PENANG, Malaysia, Jul 21 2012 (IPS) - Three years ago, Sherly Hue lived the life of a typical career woman in Kuala Lumpur, working as a marketing executive promoting building materials. But one day, she received a phone call from her worried parents that would forever change her life.

Hue’s parents, who were looking after her four-month-old son in Bukit Koman, a small village of 300 families in Raub, in the central state of Pahang, requested that he be relocated to Kuala Lumpur. A gold mining company had started operations in Raub and her parents felt it was no longer safe for the baby to remain in the village.

In 2008, a U.S. expert in mining contamination had visited the area and concluded that the gold mine did not comply with international standards and could cause long-term contamination. The facility, only 200-300 m away from the village, uses the ‘carbon-in-leach’ method and consumes 400 tonnes of sodium cyanide a year.

In Kuala Lumpur, Hue sat up and took note. ”I searched on the Internet for cyanide in gold mining and found a lot of cases and accidents in many countries – even without spillages.”

Hue quickly relocated her son and her mother to Kuala Lumpur, while her father, a retired contractor-turned-smallholder, decided to remain in their village to tend to his plantation.

There was no turning back for Hue. “After I found that this project appeared harmful, I approached the secretary of the committee (opposing the gold mining operations).” She put her marketing experience to good use and proposed to the committee that it should print booklets for an awareness-raising campaign.

On Oct. 9 last year, the group participated in a landmark gathering, dubbed Himpunan Hijau 1.0 (Green Gathering), at a beach in Kuantan, capital of Pahang, to endorse the ‘Earth Charter’.

A paragraph from the charter encapsulated the vision for the new green movement. “Let ours be the time remembered for the awakening of a new reverence for life, the firm resolve to achieve sustainability, the quickening of the struggle for justice and peace, and the joyful celebration of life.”

Among civil society groups and activists supporting the launch were those opposing a controversial Australian rare earth refinery run by Lynas Corporation in Kuantan and those opposing high tension power cables in Rawang, central Selangor state. Also  attending was the Coalition for Clean and Fair Elections (Bersih) and a group of indigenous ‘Orang Asli’ people.

Four months later, on Feb. 26, a second gathering, Himpunan Hijau 2.0, was held, focusing largely on the campaign to oppose the Lynas Corporation refinery. This time, some 15,000 people from all over the country converged on a field in Kuantan in what was the largest environmental gathering in Malaysian history.

But even these large gatherings were topped by Himpunan Hijau 3.0, when some 20,000 ‘green shirts’ gathered on Apr. 28 in the shadow of the Kuala Lumpur City Centre towers in an event timed to coincide with the third Bersih rally to push for electoral reforms. The splash of Himpunan Hijau greenies in a sea of over 200,000 yellow-shirted Bersih supporters captured national attention.

At the Himpunan Hijau 3.0/Bersih 3.0 rally especially, it was evident that the environmental movement had come of age, touching a chord among many young people like Sherly Hue. How did this happen in a country where the green struggle was until last year, very much in its infancy?

Dr. Khim Pa, one of those spearheading the Penang-based People’s Green Coalition, a group of environmental activists that participated in Himpunan 3.0, marvels at the newfound awareness.

”Young people are more attuned to these environmental issues. They had been brought up on a constant diet in school on the need to recycle refuse and old newspapers. The conservation movement had also created general awareness. Young people were exposed to campaigns to plant trees, protect wildlife like the orang utans and tigers, and conserve rivers,” Pa said.

From here, young people simply made a logical leap in deduction, he believes: “They have made the connection – on the one hand there is a general movement to create awareness about the importance of conservation but on the other, you are allowing in toxic industry. The young people can make the link.”

Hue herself believes the Internet, especially social media networking sites like Facebook, played a major role. ‘Previously, youths were not interested and did not dare to come out (to protest); they were more interested in playing games and shopping,” she notes.

But Facebook disclosed a lot of information that young people could not read in the mainstream media. ”These issues caught their attention and worked on their emotions to pay closer attention to these social issues,” she says.

”But it was the anti-Lynas campaign that really grabbed attention, especially over the issue of radioactive waste,” she said.

The Himpunan Hijau and Bersih rallies have not escaped the attention of the authorities. A senior police ‘special branch’ assistant director was reported as saying the police were concerned over opposition parties and non-government organisations which “play up controversial issues and incite the public to hate the government before the general election”.

He said opposition parties were supporting the Bersih, green and other protests with one eye on the coming polls, which must be held by next June at the latest, though the prime minister may call a snap general election anytime.

Khim Pa said the green movement is now enmeshed with the yellow-shirted electoral reform push. “The whole country has woken up to this problem of environmental degradation.”

Toxic industries in the developed nations have found that they can move their dirty or toxic operations (such as aluminium smelters) to developing countries where environment standards or enforcement or both are lax, says Pa. A dermatologist by profession, Pa points to the high incidence of skin problems in Raub.

This relocation to developing countries is often facilitated by local intermediaries or cronies, or through the involvement of local partners. Pa believes that many Malaysians have now come to realise that without clean electoral rolls, they have no hope of voting in a new government that is responsive to their concerns.

Hue concurs: ”I believe our elected representatives play an important role in highlighting issues in Parliament. If the representative does not stand with the people, we have to replace the person. But if the electoral process is not clean, our right to vote becomes useless.”

Meanwhile, the marketing executive-turned-activist will no doubt be looking forward to Himpunan Hijau’s next major focal point on Sep. 2 in her hometown of Raub.