NEW YORK, Jul 10 2012 (IPS) - New York State legislators up in Albany are likely to be seeing a lot of Librada Paz in the near future. 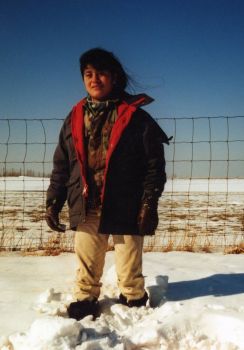 Librada Paz in the winter of 1990, when she worked trimming apple trees about two years after arriving in the United States. Credit: Courtesy of Librada Paz

The farmworkers’ rights activist was recently chosen as the 29th recipient of the annual RFK Human Rights Award, marking the beginning of a six-year partnership between Paz and the Robert F. Kennedy Center for Justice and Human Rights to further her advocacy for just working conditions for farmworkers and the recognition of additional exploitation women face in the fields daily.

“The judges were extremely impressed with her, and excited about the possibility of making a difference with our support,” Santiago Canton, director for the Human Rights Program of the Washington D.C.-based RFK Center, told IPS.

The future partnership with Paz and her organisation, Rural Migrant Ministry (RMM), will include financial support and human resources for advocacy campaigns to get farm workers equal protection under New York State’s Labor Relations Act.

Currently, farm labour is excluded from this law – which grants other New York State workers such rights as a day of rest, sick leave, paid overtime and collective bargaining – leaving it up to farmers to decide whether or not to extend such rights.

“I’m very excited about this partnership,” Librada Paz told IPS. “RMM needs a strong partnership like this in order for us to really help out. I think it’s going to be really powerful.”

Paz migrated from Mexico to the U.S. at age 15, along with her sister, where she joined her two brothers working 14-hour days on farms in Florida, California and New York. For the next 15 years, she experienced first hand many of the conditions she today addresses in her work for RMM, a non-secterian organisation educating and advocating for farmworkers across New York state.

Having obtained a college degree and her citizenship, Paz quit the fields in 1998 and has since poured her energy into lobbying for such initiatives as the Farm Workers Fair Labor Practices Act – a bill that has won the backing of other civil society organisations, like the New York Civil Liberties Union (NYCLU).

She’s eager to stress that “not all farmers are bad”, but that protections ought to be in place for those workers who are currently being exploited by the rotten apples in the industry.

“People are being fired because they get sick. And people get sick because they don’t get a day of rest,” she said.

Her organisation further seeks overtime pay for work “above 50 or 60 hours a week”, which is a standard workweek for farmworkers, according to Paz.

One of the biggest obstacles her organisation faces in its lobbying efforts at the state level, she said, is politicians’ disbelief that workers’ rights are violated to the extent they are. When it comes down to it, “It’s always their word against the farmers’.”

In addition to across-the-board farm labour conditions, which Canton calls “horrendous” and “anachronistic” in most of the U.S., women face additional discrimination, ranging from difficulties securing farm work to endemic sexual abuse.

“When I first came here, we would go to farmers and they would say ‘we’re not hiring women, we’d never ever hire women’,” the now 39-year old remembers of her early experiences finding work. “Now it’s more open, but it’s still not as easy as for men.”

Once she did find employment, the living conditions were tough for women. “People want to take advantage of you. We sleep with men and women in one room. And you know what men do when there aren’t many women around.”

Paz, who has been active in the farmworkers movement since high school but who didn’t become politicised as a woman activist farmworker until about 10 years ago, sees a similar trajectory reflected in other women. “Maybe it’s me paying more attention now, but even just 10 years ago, women were much less visible in the movement that they are now.”

She remembers attending a conference on sexual violence against women farmworkers around that time as one of the first instances that women around her banded together for their rights. “Women have become more active and are participating in events, and working to empower other women.”

Paz’s award closely follows the recognition of another farmworker rights activist, Dolores Huerta – cofounder of the United Farmworkers with Cezar Chavez – who received the Medal of Honor from U.S. President Barack Obama in May.

Both choices mark a strong recognition of women’s involvement in the fight for equal labour rights of farmworkers and the additional discrimination they encounter.

The RFK Center, which announced the decision last week, chose Paz out of 34 nominees to enter into a partnership. The centre will provide up to 30,000 dollars in financial assistance and one staff person at the centre who will fully dedicate their time to working with the award winner on a strategy they design and execute over the next six years, according to Canton.

“This doesn’t mean after six years we’re gone,” he stressed. “The idea of the award is to help those individuals and those organisations that are working towards social justice to make a difference in the world of millions of people. If after six years we still consider this work relevant enough to continue, we will continue to support her.”

In recent years, the Robert F. Kennedy Center has recognised and supported the work of Ugandan LGBTQI-activist Frank Mugisha and Mexican advocate for indigenous rights Abel Barrera Hernández, among others.

Paz admits she wasn’t aware quite how big of a deal the award was until she won it and did some research.

“I did not know how powerful they (the RFK Center) are. When I realised it, I thought, ‘Wow, this is really incredible.’”

With the help of the RFK Center, she’ll be knocking on some more doors in the state capitol, Albany, soon, she assured IPS. After all, she knows her way well there. “I’ve been around and around to Albany,” she says, laughing, “And I never give up.”

The award will officially be handed to Librada Paz during a ceremony in Washington D.C. in November.