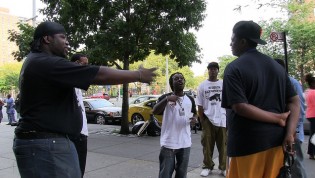 By Kim-Jenna Jurriaans
Ask a random New Yorker what their city is famous for and “composting” is about as likely to make the list as “cheap housing” and “warm winters”. But if it is up to Mayor Michael Bloomberg, this will soon change.

By Kim-Jenna Jurriaans
Following a lukewarm outcome of the Rio+20 sustainable development negotiations in June, U.N. Secretary-General Ban Ki-moon is moving full-steam ahead on a new initiative aimed at leveraging public-private partnerships to bring modern energy to over one billion people by 2030.

By Kim-Jenna Jurriaans
While the global community made progress in reducing under-five child mortality to below seven million per year, it risks failing to reach the global targets set for 2015 if action is not scaled up, according to a new report released by the U.N. children's agency UNICEF Thursday.

By Kim-Jenna Jurriaans
Alleged human rights violations and other challenges involving the use of Private Military Security Contractors (PMSCs) have sparked a series of international efforts to create systems of accountability for an increasingly complex transnational industry.

By Kim-Jenna Jurriaans
The United Nations is increasingly hiring Private Military and Security Companies (PMSCs) for its missions across the world, raising concerns over the use of firms known for participation in human rights abuses, as well as an overall lack of accountability structures governing these contractors within the U.N. system.