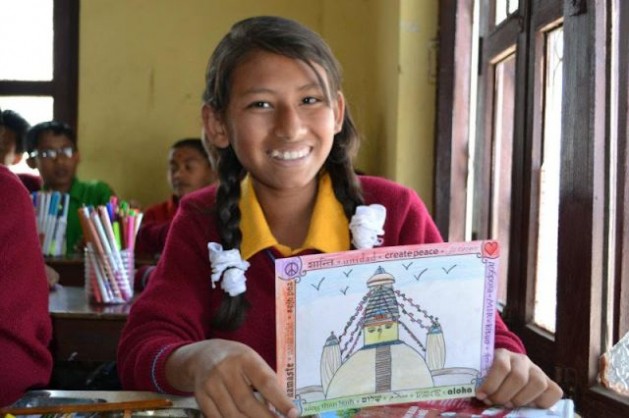 UNITED NATIONS, Sep 10 2012 (IPS) - When Ross Holzman packs for a work trip, he brings three bags with him: One with blank postcards, one with crayons, and one with thousands of artworks created by children around the world.

The artworks, called “peace cards”, are canvasses on which children express their visions for peace in drawings and text.

During Peace Exchange workshop, children, ages eight to 18, are encouraged to discuss what peace means to them and what they can do to build it. Every child who completes an artwork, in turn, receives a card from another child across the globe.

“The inspiration for what I do is really based on looking around in our society in America having travelled abroad,” Holzman, 37, told IPS. “We don’t discuss peace. We take for granted that we essentially live in a peaceful environment, but there is violence in our schools, our media, our communities.”

Post-graduate stints in the corporate marketing world led him to India in 2002 from where, he said, he returned transformed, taken aback by the negativity and fear that permeates U.S. media.

A former-business-consultant-turned-peace-educator, Holzman started making political art following the U.S. invasion of Iraq, but soon realised that fighting aggression with angry art was not creating the positive change he really sought.

At the same time that the U.S. was spending billions on two wars abroad, Holzman saw art education programmes going on the chopping block in schools across the country, limiting possibilities for youth to process their experiences in the world artistically.

He started working on collaborative art projects, including large-scale peace banners with youth and “grown ups” to foster cooperation and self-expression in the Bay Area.

With Banners for Peace he subverted a classic U.S. American advertising technique – the omnipresent billboard– and used it to draw attention to peace education.

But setting ego and personal vision aside to build a shared vision was a learning experience for Holzman as well.

“I had to get over my own resistance to working with others,” he said. “Collaborating with art can be a really difficult thing – it can push people’s buttons. But in order to harmoniously coexist, we have to experiment in new ways of being and working together.”

He founded the Creating Peace Project, a San Francisco-based NGO, in 2008, to give a home to his existing peace education projects and embark on an international Peace Exchange between children from different cultures.

He has since facilitated peace-card workshops in India, Nepal and Uganda, where he’s worked with thousands of children, including refugees and children affected by civil war.

For him, the key to peace is self-awareness. “The thing that I’ve learned is that self expression, being creative is one of the premier tools for learning about ourselves – the more we learn about ourselves, the more we are at peace with ourselves.”

Shifting one’s perspective inward to connect with feeling and emotions allows for a change in our relationship to those feelings, Holzman said, “even if they are dark and negative and potentially violent.”

A typical workshop takes two to three hours, involves discussion, a short meditation and a free-form hour in which children paint their own peace cards that will travel in Holzman’s bag to another school across the world.

The young artists share their work and vision with the group before handing their artwork to the instructor, who, in turn, sets off a frenzy of excitement by handing out cards created by children across the world.

The act of sharing and letting go is another essential part to peace building, according to Holzman. “You’re translating emotions into something real and then you give it away. You create something you are attached to and then you let it go.”

Spearheaded by UNESCO, the United Nations Educational, Scientific and Cultural Organisation, the declaration acknowledges the need for creating peace culture through means other than political cooperation and economic development.

Education for peace, disarmament and building cooperation and solidarity are among the defined elements of moving from a culture of war to a Culture of Peace at a family, community and global level, according to the declaration.

On Sep. 14, the 193-member General Assembly will once again take on the issue of building a Culture of Peace during a High-Level Forum , a week before World Peace Day on Sep. 21.

Holzman , meanwhile, is happy to continue to learn from and be surprised by the children he works with.

Bringing a bag of cards from Colombia into a privileged San Francisco school recently, he got a bit nervous.

“I was sure these hipster San Francisco kids are just going to be like ‘whatever.’ That was my own negative premonition, and I was totally wrong,” he recalled about the class’s heartfelt responses that day.

“It’s not about the calibre of creativity, but that something is given and received and it teaches them that we are part of a global culture and that we all want the same things.”