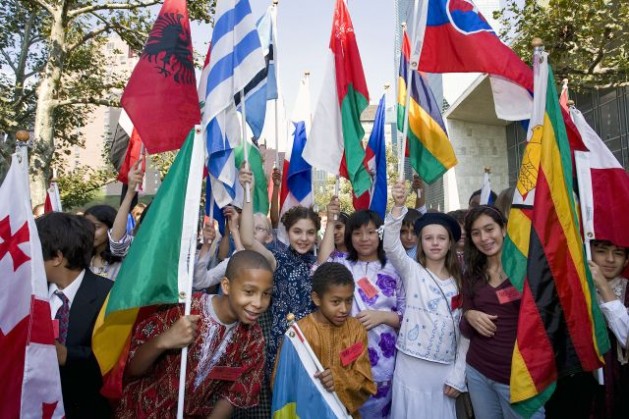 Cheerful young students in their traditional dress proudly waive their national flags during the Peace Bell ceremony of the observance of the International Day of Peace: "Peace - A Climate for Change", at UN Headquarters in New York. Credit: UN Photo/Paulo Filgueiras

UNITED NATIONS, Sep 6 2012 (IPS) - Amidst growing attacks on religious groups and a rising intolerance toward migrants and minorities worldwide, the 193-member General Assembly will hold a High-Level Forum next week to discuss one of the key issues on the U.N. agenda aimed at promoting social, economic and political harmony: a culture of peace.

Nassir Abdulaziz Al-Nasser, president of the General Assembly, the prime initiator of the Forum, said the United Nations was built on the premise that dialogue is the best path to peace.

“And that cultural diversity, freedom of thought, and knowing each other enhances respect and tolerance,” he said.

The United Nations, he noted, recognised the notion that the international community consists of different faiths and religions.

“It was unfortunate that in some parts of the world there is growing intolerance, xenophobia, and incitement to hatred,” he added.

When the General Assembly adopted a consensus resolution on a wide-ranging U.N. Declaration and a Programme of Action on “culture of peace” back in September 1999, they were aimed at propagating a set of values, attitudes, traditions and modes of behaviour and ways of life.

These norms included respect for life, promotion of human rights, the right to development, full respect for national sovereignty, commitment to peaceful settlement of conflicts and an end to gender discrimination.

But 13 years – and hundreds of hate-killings – later, the world continues to witness racial and religious profiling, homophobia, discrimination against migrants and minorities, and the spread of Islamophobia, specifically targeting Muslims.

Last month, a gunman killed six worshippers at a Sikh temple in the United States – a murderous rampage described as a bias crime because the killer was under the mistaken assumption he was training his gun on Muslims, erroneously associating turbaned Sikhs with the Taliban in Afghanistan.

In July 2011, a lone gunman walked into a youth camp on the Norwegian island of Utoya and killed nearly 77 people, mostly teenagers. The attacker, a Norwegian national, was described as a right-wing extremist who hated Muslims and migrants.

The High-Level Forum, scheduled to take place Sep. 14, is meant to be an additional boost to the global movement to promote the Culture of Peace, as envisaged by the United Nations, particularly in the current global context.

The day-long, first-ever General Assembly Forum is also intended to be an open platform for U.N. member states, U.N. agencies, civil society, including non-governmental organisations (NGOs), media, private sector and all others interested to have an exchange of ideas and suggestions on ways to build and promote the Culture of Peace, according to a statement released here.

A special focus will be on the implementation of the 1999 Programme of Action (POA) on Culture of Peace, as well as for the further strengthening of the global movement that has emerged.

The keynote speakers at the High-Level Forum will include Secretary-General Ban Ki-moon, General Assembly President Al-Nasser, Federico Mayor, president of the Foundation for a Culture of Peace, and Cora Weiss, president of The Hague Appeal for Peace and former president and current U.N. representative of the International Peace Bureau.

Speaking at a forum in the historic Italian city of Rimini last month, Al-Nasser said in some societies, culture is perceived as a source of division, instead of a path to dialogue and human solidarity.

Still, he said, in some regions minorities are subject to atrocities or mass killings, because they belong to different religions. Holy books are burned, religious symbols are defamed.

“This is not a society we want to live in,” said Al-Nasser. “We should protect the diversity in our societies. We have entered a world in which these issues will continue to unsettle us, unless we realise the benefits of diversity and share the fruits of globalisation in a just and harmonious way between all members of the human family.”

The General Assembly, the U.N.’s highest policy-making body, has always expressed its special concern over hatred and religious intolerance, and it has taken several initiatives to fight these scourges, the president said.

The General Assembly, through its Human Rights Council, has endlessly introduced Human Rights resolutions prohibiting discrimination on grounds of religion, race, xenophobia and of related intolerance.

Multi-ethnic, multi-faith, multi-lingual and multi-cultural societies are to be viewed as a source of wealth for all humanity.

“We should also recognise the wisdom of member states – when realising this need – establishing the United Nations Alliance of Civilizations, given the important contribution of dialogue for peace and development,” he said.

The Alliance was established at a time when grave tensions rooted in cultural differences gripped the world.

“This new institution emerged as a new hope for the international community to stem the tide of intolerance and offer a perspective of hope and fraternity,” Al-Nasser said.

It is encouraging that today, the Group of Friends of the Alliance of Civilizations has reached more than 107 U.N. member states, in addition to other partners.

“I am hopeful that, in the future, the membership of the Group will be universal,” he said.

The Alliance of Civilizations has contributed, through its various activities, to a clear shift “in the way we look at diversity”.

Following the Madrid, Istanbul and Rio Forums, the fourth forum of the Alliance was held last December in Doha, Qatar.

It focused on the interconnection between diversity and development. It is obvious that without harmony among different groups in a society, it is not possible to reach prosperity and sustainable economic development, Al-Nasser said.

“Now, we are looking forward to the next forum that will be hosted by Austria next year in Vienna, which I am confident that will substantially contribute to the issues we are discussing,” Al-Nasser added.

He said the Alliance has a role in a world, “where different religions need not divide us, but unite us and serve as a bridge for a more peaceful and tolerant human family”.