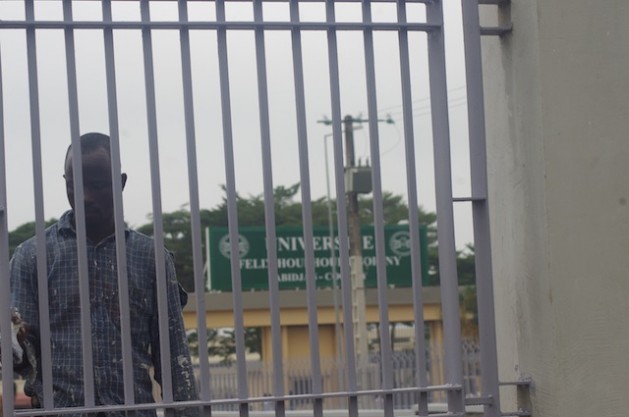 Painter Karim Traore, 40, puts the finishing touches on a gate at a newly refurbished university in Abidjan. Credit: Robbie Corey-Boulet/IPS

ABIDJAN, Sep 4 2012 (IPS) - Yacouba Coulibaly was pursuing a doctorate in education at Cocody University in Abidjan before Côte d’Ivoire’s post-election violence started in 2010. But his classes were routinely disrupted by armed members of a powerful student federation that wished to hold meetings instead.

Later, the country’s public universities were closed in 2011 at the end of the post-election violence and Coulibaly was unable to continue his studies.

But now he is one of an estimated 61,000 students who are expected to start classes soon in the new academic year, as the country’s five public universities reopened on Monday Sep. 3.

“I hope we will have a peaceful university, where people do not behave like we’ve seen in the past,” he told IPS.

“I don’t want my younger brothers and sisters to suffer this same way,” he said, referring to the West African nation’s future crop of students.

Coulibaly said that the reopening of the universities, marked by a ceremony on Monday at Cocody University (which has been renamed after the country’s founding president, Felix Houphouet-Boigny), would help the country develop.

Côte d’Ivoire’s President Alassane Ouattara is also hoping that large-scale investment in the education sector can help his country’s universities shed a legacy of violence and corruption that contributed to recent turmoil. But concerns persist that higher education could again be corrupted by politics.

Speaking at Monday’s ceremony, Ouattara pledged to nurture a university system that would rival the best in the world, and also vowed to implement reforms at the primary and secondary levels.

“As an economist, I am convinced that investment in universities brings the highest yield in development,” he said.

The president lamented the role universities played in the nation’s 2010 to 2011 post-election crisis. He said they had become places “of violence and corruption” during the administration of former President Laurent Gbagbo.

Ouattara defeated Gbagbo in the November 2010 election, but the incumbent refused to cede office, sparking violence that claimed at least 3,000 lives. Gbagbo, who has since been transferred to the International Criminal Court at The Hague, used to be a professor. He garnered strong support from university faculties and the Student Federation of Côte d’Ivoire (FESCI).

For years leading up to the violence, FESCI had become associated with extortion and racketeering, often resorting to violence. A 2008 Human Rights Watch (HRW) report implicated FESCI members in assault, extortion and rape, saying members targeted Gbagbo’s political opponents with impunity. HRW and other groups have also said FESCI members were involved in the 2010-2011 conflict.

Augustin Mian, FESCI’s secretary general, told IPS the group had been turned into a scapegoat for the country’s past problems, and claimed FESCI members have been targeted for abuse by pro-Ouattara forces since the conflict ended.

“We are protesting against the fact that people say we are militias,” he said. He added that the group would continue to advocate on behalf of students, and planned to protest a pending increase in registration fees.

Ouattara has defended the move to close the universities in the first place, which was unpopular with many Ivorians.

Rene Legre Houkou, president of the Ivorian Human Rights League, was among those who thought the decision wrong.

“For us, this decision stopped the normal process of teaching and training,” he told IPS.

“We thought that this violated the right to education, and we were worried that all of these students would be left doing nothing.”

Houkou said officials would face a number of challenges as the universities resumed classes, including finding replacements for the many professors who were allies of Gbagbo and are now in exile.

Meanwhile, students in Abidjan said they hoped the five university campuses – refurbished at a cost of roughly 210 million dollars – would be peaceful from now on.

Most students said they were just happy the existing universities were open again. Kone Pranhoro, a 30-year-old pursuing a PhD in economics, said it was “a good opportunity for the future generation.”

“We hope that politics will never be involved in the universities again,” he said.