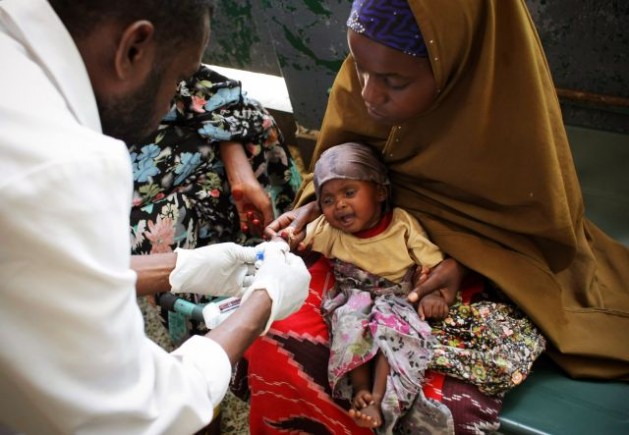 A malnourished and dehydrated baby cries as a doctor applies an intravenous drip to increase fluid intake at Banadir Hospital in the Somali capital Mogadishu. Credit: UN Photo/Stuart Price

UNITED NATIONS, Sep 13 2012 (IPS) - While the global community made progress in reducing under-five child mortality to below seven million per year, it risks failing to reach the global targets set for 2015 if action is not scaled up, according to a new report released by the U.N. children’s agency UNICEF Thursday.

“The story of child survival over the past two decades is one of significant progress and unfinished business,” UNICEF Executive Director Anthony Lake stressed in the introduction of the 2012 progress report Committing to Child Survival: A Promise Renewed.

In moving forward, programming must continue to involve communities and local women’s groups in mortality-prevention efforts, UNICEF chief of health Mickey Chopra told IPS, as these have been crucial to achieving the successes booked so far.

A mixed bag of progress

Out of the 66 countries with high under-five mortality rates, only 15 are currently on track to meet the deadline for achieving Millennium Development Goal 4 (MDG 4) on reducing child mortality by two-thirds in 2015.

Pneumonia, pre-term birth complications and diarrhoea are the leading causes of death in children under five, according to the report, which also states that one-third of all under-five deaths are attributable to undernutrition.

While this progress is significant, a number of regions, particularly sub-Saharan Africa and Southern Asia, continue to show alarming rates of deaths in children under five.

Out of the 24 countries that continue to struggle with the severest rates of child mortality, 23 are in Sub-Saharan Africa, where one in nine children dies before the age of five, according to the report.

With an under-five mortality rate of 1.7 million, the country with the highest child mortality worldwide is India. Together with sub-Saharan Africa, it accounts for 80 percent of all children dying under the age of five.

But poor results in these regions overshadow the fact that two others, East Asia and North Africa, have achieved MDG4 ahead of the 2015 deadline, while Latin America and the Caribbean – with a 64 percent reduction – is well within reach.

“Women’s groups are the reasons for the successes we’re seeing across the world,” said Chopra, who highlighted the role of organised women in preventing HIV and mother-to-child transmission.

“We also have evidence, particularly from Asia, where women’s groups have led to significant reductions in newborn death as mothers teach each other and model behaviour for each other of how to take care of their newborn.”

Solome Mukisa is the executive director of the Uganda Community-Based Association for Child Welfare (UCOBAC), a local women’s organisation in Kampala, Uganda, which provides free immunisations for infectious diseases like whooping cough and tuberculosis and educates communities about disease prevention in children under five.

“In all the work we do to support child health, we prefer to work with women and women’s groups because women tend to spend more time with the children and are more likely to spend their income on the children than men,” she said.

In addition to making home visits and connecting mothers with government health centres, UCOBAC empowers women with knowledge, skill and finances to start and manage kitchen gardens with nutritious vegetables and fruits on which to feed their children.

Community-based efforts like these have contributed to an increase in the annual rate of decline in under-five mortality over the last decade – the decade of the MDGs – from a 1.8-percent decline in the 1990s to a 2.3-percent decline between 2000 and 2011.

This success has been even higher in sub-Saharan Africa, which doubled its annual rate of reducing child mortality from 1.5 percent to 3.1 percent over the same period.

Still, with a comparatively low decline of 39 percent since 1990, Sub-Saharan Africa has a much further way to go than others, joined by Oceania with only 33 percent.

In an effort to be more effective in its mission, UNICEF has been advocating at the global level to make new technologies available to developing countries, including bringing new vaccines to the market more quickly and at cheaper prices, Chopra said.

“Previously, it took a new vaccine 20 years from its introduction in the North to make it to countries in Africa or Asia. But in the last five years, with new pneumonia and diarrhoea vaccines, it’s taken us less than two to three years for new vaccines to be introduced in the South.”

To accelerate progress in the home-stretch of the MDGs, UNICEF and its partners are scaling up action through A Promise Renewed, which among other measures, calls on governments to sharpen evidence-based country plans to prevent children dying from preventable causes.

International partners ought to make a significant jump of 25 percent in the next three years to reach MDG 4 by 2015, it says.

“As the message of report … makes clear, countries can achieve rapid declines in child mortality with determined action of governments and supportive partners,” according to Lake.

“The time has come to re-commit to child survival and renew the promise,” UNICEF Deputy Executive Director Geeta Rao Gupta said on Wednesday.

In 2011, 19,000 children per day died before reaching their fifth birthday, according to UNICEF.