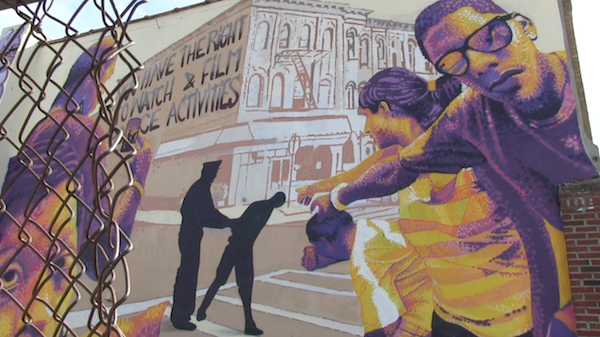 A mural in Bushwick aims to raise awareness about residents' rights in dealing with the police. Credit: Kim-Jenna Jurriaans/IPS

NEW YORK, Aug 27 2013 (IPS) - A colourful mural occupies the full left side facade of a three-storey house on the corner of Irving and Gates Avenue in the Brooklyn neighbourhood of Bushwick. It depicts a group of youths taking cellphone footage of an arrest scene. Above it, a message reads, “You have the right to watch and film police activities.”

“We painted this mural to make people aware of their rights,” says 19-year-old Justin Serrano, who grew up in this predominantly Hispanic community, where about a third of households live below the poverty line.

The mural, painted by youths at Make the Road New York, a non-governmental organisation that offers community and youth-empowerment programmes in working-class communities across the city, reflects the prevalence of police in the lives of young people in Bushwick. It also provides insight into their relationship with the New York Police Department (NYPD) in their community.

"It makes me feel like I'm non-human."
-- Justin Serrano, on stop and frisk tactics

For youths growing up in communities of colour, such as Bushwick, that relationship over the last decade has been marked by one policing tactic in particular: Stop, Question and Frisk.

Stop and frisk, as it’s popularly known, allows police officers to stop and search persons under reasonable suspicion they are involved in criminal activity. It’s a staple tactic in New York’s zero-tolerance approach to policing and has become the modus operandi under the city’s last two mayors.

Mayor Michael Bloomberg and the city’s police commissioner Ray Kelly have credited the policy with a citywide decline in violent crime and 8,000 guns being taken off the streets.

Available NYPD data shows that between 2003 and 2012, New York police performed close to five million stops. In roughly 88 percent of these stops, the subject was black or Hispanic.

In 90 percent of stops, police were unable to prove any wrongdoing. Last year alone, blacks and Hispanics were subject to nearly 400,000 innocent stops.

While the number of stops skyrocketed in recent years, gun recovery has been persistently low throughout the decade, at less than one percent of stops.

Change seems to be on the horizon after two historic wins for police-reform advocates in New York this month, but community advocates and criminal justice scholars emphasise the collateral damage created by millions of innocent stops.

The explosive rise in the number of stops involving young men of colour has raised particular concern about the adverse impact on generations of youths growing up “overpoliced“, according to researcher Brett Stoudt, a psychology professor at John Jay College of Criminal Justice and the CUNY Graduate Centre.

From 2008 to 2009, youths between the ages of 14 and 21 made up one-third of all stops while accounting for only one-tenth of the city’s population, one of his studies revealed.

Stoudt says that repeatedly being stopped under suspicion of criminal activity without having done anything wrong has a demoralising and disempowering effect on young people.

The high number of stops in select neighbourhoods also creates a “cyclical environment” by increasing the chances that youth in these communities “for one reason or another” are caught up in the criminal justice system, according to Stoudt, co-author of the recently report “Stop, Question and Frisk Policing Practices in New York City“.

For example, “during a stop, an officer may find a small amount of marijuana. Or [the young person] can get scared and they run,” he tells IPS.

“It makes me feel like I’m non-human,” says Serrano of the more than twenty times he’s been stopped. On one occasion, he was rushing home to bring medicine to his mom and ended up at the local precinct instead.

In New York, young people’s experiences with police don’t stop in the streets – they also extend into schools and residential buildings, where NYPD can legally be present.

This surveillance of all aspects of daily life can lead youth to significantly change their personal behaviour, says Stoudt, including not seeking help from police when they need it.

Sitting on a bench at a local playground, Serrano takes a minute from eating ice cream to offer advice to two younger friends pulling up on BMX bicycles.

“You gotta stop riding your bike, man,” he says. “Since I started riding my skateboard, I’ve been stopped way less.”

Serrano also stopped “hanging out” inside his community, he says. Instead, he meets his friends in a gentrified section of a nearby neighbourhood, where they are not bothered.

In the Brooklyn neighbourhood of Flatbush, a few miles south of Bushwick, Keron Gray says he avoids being outside with his “louder friends” and stays clear of routes where he is more likely to be stopped.

City officials have long defended the tactic of stop and frisk by pointing to a higher prevalence of violent crimes in target communities.

In a landmark decision on Aug. 12, U.S. District Court Judge Shira Scheindlin rejected that argument, ruling that the NYPD’s application of stop and frisk created “a policy of indirect racial profiling” that had violated the constitutional rights of non-whites.

Scheindlin, who found that “the racial composition of a precinct or census tract predicts the stop rate above and beyond the crime rate,” ordered a sweeping reform process.

The NYPD did not respond to a request for comment. Meanwhile, Mayor Bloomberg, who has moved to appeal the federal ruling, has warned that both decisions will stifle police work and cause a surge in violent crime.

But between this month’s events and a new mayor taking office in 2014, reform seems inevitable for the nation’s largest police force.

For Serrano, however, some damage is irreparable. “The first time I was stopped, I was with my little brother… To this day, [he] sees me different[ly] – he sees me as a criminal.”