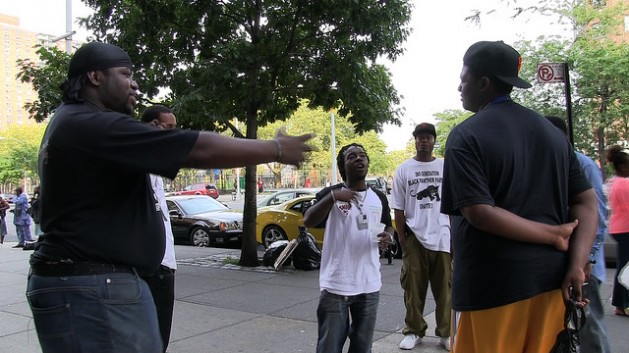 NEW YORK, May 1 2014 (IPS) - It’s four o’clock on a sunny afternoon in Harlem and 19-year-old Solideen Rann is spread out on a plush hand-me-down couch inside an old glass-and-aluminum storefront on Malcolm X Boulevard.

His body language is making no effort to conceal he’s only reluctantly participating in a conversation with Dedric Hammond, 36, who’s taking up the other corner of a dream in bright orange velour.

“If you build me a [sports] centre and I was shot yesterday – and the guy who shot me is at the centre today – you can bet I’ll come over there to shoot something. But it ain’t gonna be no basketball.” -- Dedric Hammond

“You do this one thing for me and I’ll leave you alone,” Hammond says, leaning into him.

“I’m not about that sh*t no more,” Rann pleads uncomfortably, trying to get the six-foot-four-inch man to leave him alone, which is proving futile.

“Just this one time. That’s it,” the elder continues his persuasion.

In a not-so-distant universe, this script of a conversation between two men intimately familiar with the darker side of Harlem’s bustling streets could spell a shady affair with a dangerous outcome.

Today, however, the conversation is about an upcoming panel discussion and Hammond, who’s known in the neighbourhood simply as “Beloved”, is pushing Rann to step up as a role model to other teens.

The office they sit in is that of Operation SNUG (“guns” spelled backwards), a team of “interrupters” charged with breaking the cycle of youth violence in this stretch of Central Harlem between 125th and 137th street.

Here, roughly one in three families live below the poverty line.

“That sh*t” Rann referred to is getting into street fights – fights that once landed him in jail and killed his best friend.

These streets and others like them funnel some 24,000 young people each year into New York State’s juvenile justice system – one of the harshest in the United States, where teens as young as 16 can serve time in adult prisons.

Half of those arrests are in New York City, where 52 percent of juvenile delinquent cases involve crimes against another person.

At all hours of the day, cell phones are buzzing in the SNUG office. They’re brimming with messages from community leaders, concerned parents and local youth providing tip-offs that a conflict between rival groups has reached boiling point. Within minutes, SNUG staff hit the streets to step in and mediate between the different sides.

They mediate on street corners and in public parks, in hospital waiting rooms and public housing hallways.

When a shooting or stabbing victim is submitted to Harlem Hospital, SNUG staff are the first to be called –ahead of the local police — to talk the victim, family and friends out of retaliating.

“Because the moment we know… what they have feelings for, that’s when we can start this conversation and begin the process of healing.”

It’s a process that Hammond and his team of 10 interrupters know first-hand. Each one of them is a former member of one of Harlem’s 60 some crews, each one with criminal convictions of their own.

“I’ve got people on my team who killed people,” says Hammond, surrounded by plastic flowers and props the team uses to stage “mock funerals” – one of many tactics to get “their kids” to see the devastation their actions can cause.

Hammond, who picked up his first gun to protect his little brother at age 13, spent eight years in jail and was shot twice after leaving gang life behind.

These experiences of having been on both sides of a gun are key to SNUG’s ability to connect with high-risk youth, says Beloved, whose reputation as a shooter once earned him the street name Bad News.

“Back when I would recruit a dude, I’m going to his church, I’m at his school, I’m at his mother’s house, I’m where he’s at on the basketball court.

“They innately understand the rhythm of the street, the rhythm of what happens when…” says Aarian Punter, project manager for Restorative Justice Services at the Harlem unit of the New York City Mission Society, a community cornerstone that provides educational services and after school programmes for youth.

“They know when to hit the streets, hit the blocks, call their caseload.”

The Cure strategy to use former gang members as “credible messengers” to interrupt violence was previously applied in Chicago, where it reduced shootings and killings by 41 percent to 73 percent, according to a Department of Justice-funded study, and virtually eradicated retaliatory shootings.

To build trust with high-risk youth, outreach workers don’t communicate with police, but instead build strong relationship with community organisations and hospital staff.

In addition to application across the US, communities in Iraq, South Africa, Britain, Kenya and Trinidad and Tobago today use the model.

Eighty-hour workweeks are not uncommon for SNUG’s outreach workers.

Apart from the 24-hour crisis interventions, there’s the regular heart-to-hearts on the bright-orange couch. There’s the monitoring of social media for signs of brewing disputes and there are the spontaneous field trip to the ice cream shop as a way to keep two rivaling groups out of each other’s hair.

It’s all part of the puzzle to stop the viral transmission of violence.

Operation SNUG is an offshoot of the Cure Violence model created by epidemiologist Gary Slutkin, who found that major outbreaks of violence like the Rwanda genocide followed the patterns of outbreaks of infectious diseases and who holds that violence can be contained and even eradicated when approached like a virus.

Key, according to Slutkin, is a shift from public shaming of “bad” people to identifying the transmitters of violence and changing personal behaviors and community norms.

In New York state the vast majority of juveniles in youth facilities – 83 percent in 2010 – are black and Latino. Eighty-nine percent of boys and 81 percent of girls relapse into crime by the age of 28.

Statistics like these hint at the devastation done to communities of colour by violence, drugs and chronic poverty.

Devastation reached a peak in the crack era of the 1980s and 90s when New York’s overly punitive Rockefeller Drug Laws sent a generation of men to prison, initiating a ripple effect that can be felt today, says Punter.

Working with referrals from SNUG and others, Punter and her colleagues aim to change young people’s relationship with the criminal justice system, away from one that’s “normal”, and provide educational opportunities that allow them to envision a life beyond the streets.

Operation SNUG found a home under the umbrella of the Mission Society after many other organisations found the programme too risky to take on. But without violence interruption, few other services have a chance to flourish, says Hammond.

“If you build me a [sports] centre and I was shot yesterday – and the guy who shot me is at the centre today – you can bet I’ll come over there to shoot something. But it ain’t gonna be no basketball.”

According to a 2013 study by the NYC Department of Health, gunshot wounds decreased from 52 to 26 in a one-year period in SNUG’s target demographic. While it’s hard to attribute decreases in crime to one factor only, Rann has no doubt that “Without SNUG, a lot of [guys] would have died.”

After a solid hour of persuasion by his mentor of three years, he never did step up to speak on the public panel. But Hammond doesn’t see it as a defeat.

“It’s like working with clay,” he says. “You push and mold and when you get it to where you want it then you continue to work on it like that.”