The mandatory organic waste collection and recycling programme planned for New York will drastically reduce both the amount of trash sent to landfills and the associated costs. 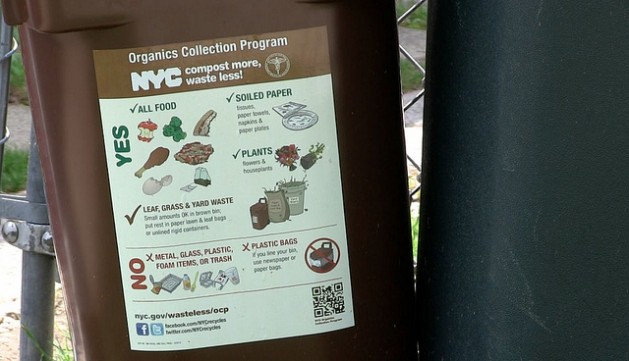 NEW YORK, Aug 6 2013 (IPS) - Ask a random New Yorker what their city is famous for and “composting” is about as likely to make the list as “cheap housing” and “warm winters”. But if it is up to Mayor Michael Bloomberg, this will soon change.

Bloomberg, who will leave office at the end of this year, announced in June that the city’s Department of Sanitation has begun collecting organic waste in pilot communities across New York and plans to drastically expand the number of participating households in the coming two years.

The ultimate goal will be mandatory organic waste recycling for all city households by 2016. The waste will be turned into compost, a fertiliser obtained from decomposed organic matter, or converted into a source of clean energy.

The initiative is part of Bloomberg’s plan to divert 75 percent of city trash from landfills by 2030 and cut down on the city’s greenhouse gas emissions, to which trash contributes about three percent.

Currently, New York City is hauling a large part of its solid waste, more than 14 million tons annually, to out-of-state landfills in Pennsylvania, South Carolina and Ohio, where it is paying 86 dollars a ton to dump the trash – transportation costs not included.

If the residents of the city’s nearly three million residential units separate organic matter from regular trash, the city hopes to divert 1.2 million tons of garbage from landfills. This move could save up to 100 million dollars per year, or just under a third of the total money spent annually to dispose of residential trash, according to the Department of Sanitation.

The initiative’s test phase currently involves two high-rises in Manhattan, the neighborhood of Westerleigh in Staten Island, as well as around 100 restaurants and public schools across the city.

But the Department of Sanitation is preparing to expand the scope to 150,000 single-family homes, 70 high-rises across all five of New York’s boroughs as early as 2014.

About a quarter of New York City trash is made up by residential garbage. Roughly another quarter is produced by businesses, and with 70 percent of that trash coming from restaurants, getting the hospitality sector involved in the initiative is an important part of the composting pie.

For eco-conscious restaurants that are already paying for special food waste pick-up, a citywide scheme for restaurants would likely be welcome. For others, with small kitchens, adding an extra bin may not be feasible, as a report on restaurants published Jun. 20 by the New York Times shows.

In addition to easing the burden on the environment and the city’s chequebook, there are various other ways in which New York can benefit from collecting organics, according to Ron Gonen, deputy commissioner of sanitation for the City of New York.

“There are two main things that can happen with your organic waste currently,” Gonen told Tierramérica*. “It can be turned into compost, which is an organic fertiliser – and we have a composting facility here in New York City – and that compost is donated to local parks and gardens or sold to landscapers.”

“You can also convert organic waste to renewable energy via a process called anaerobic digestion (in the absence of oxygen),” he added. The result is a methane-rich biogas.

New York already has one anaerobic digestor in one of its waste water treatment facilities, and the city is considering issuing a call for proposals for a large anaerobic digesting facility that could convert most of New York City’s food waste either into natural gas or clean electricity.

“But there are also some interesting emerging technologies,” said Gonen.

“One, for example, can turn food waste into a clean-burning fuel called DME (dimethyl ether, a substitute for gas oil), so it’s not unforeseeable that sometime in the near future we’d be running our sanitation vehicles off of the food waste we collect,” he added.

Westerleigh, a neighbourhood of 3,500 residents in the New York borough of Staten Island, is one of the test communities for the new composting initiative. While the participation rate stands at around 50 percent, responses of participants are mixed.

Rosemary Caccese, who was already composting in her own backyard before Bloomberg’s plan, welcomes the new city programme. “I put mine out every week,” she told Tierramérica, referring to her new brown trash can that gets picked up once a week.

“It’s work, it’s not easy to do,” she added, but as someone who cares about the environment, it is a small price to pay for her.

When it comes to citywide implementation, she expects it may be difficult for the elderly to keep up.

Across the street, Donald Carullo says the fact that he and his wife are older is precisely what allows them to participate in the initiative. For his son, who has three children, on the other hand, it is too time consuming, he told Tierramérica.

Over on Burnside Avenue, Lois Conti, who describes herself as “green” and proudly runs down a laundry list of environmentally friendly features she has added to her house, is nevertheless sceptical about the new plan, mainly for practical and design reasons.

“My girlfriend has five children; you’re going to need more than this,” she told Tierramérica, while pointing at the new oval-shaped one-gallon (4.4 litres) container in her kitchen, one of the two models that the city is distributing to households.

For a small household like hers, it is hardly worth the effort, she said. And in a hot New York summer, “It starts to smell.”

Changing attitudes is a large part of the challenge for the city in the coming months. Emphasising the financial savings to the city, and ultimately to the taxpayer, is essential to selling the programme, says Gonen.

While the current phase is voluntary, the programme would eventually become mandatory and include fines for trash offenders.

Alexander Allen, who talked to Tierramérica at one of a few dozen compost drop-off locations in the city, thinks the initiative makes a lot of sense environmentally.

He is less sure whether making it mandatory is going to work, however, and thinks that fines alone will not be enough to change attitudes. “In the end, it’s up to people,” he said.

New York City is following in the footsteps of other U.S. cities like San Francisco and Seattle that have implemented similar initiatives. But it is also charting new ground.

“There is no city in North America, and perhaps Europe, where waste management is as complicated as in New York City,” said Gonen.

But this also means an opportunity for the Big Apple to serve as an example for other cities around the world.

“There is no other major city,” he said, “that can look at what New York City accomplishes and say ‘Oh, we couldn’t do that, we have a more complex system.’”