Rescuing “Misfit” Vegetables – and Other Ways to Fight Food Waste

Cooking with vegetables that are perfectly healthy but do not meet the appearance standards of supermarkets is one of many ways to reduce the alarming rates of food waste. 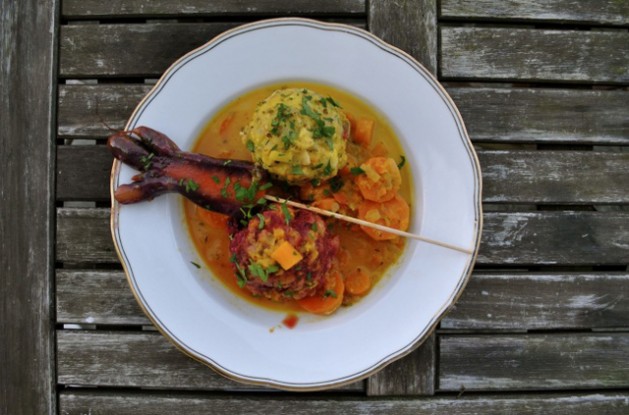 BERLIN, May 28 2013 (IPS) - The criticism and concern voiced by the United Nations Food and Agriculture Organization (FAO) and non-governmental agencies over the huge amounts of food wasted in Europe have begun to inspire action, particularly in the form of private initiatives.

In Berlin, Tanja Krakowski and Lea Brumsack, product design specialists turned cooks, created Culinary Misfits as a way to promote the consumption of vegetables whose physical appearance does not meet the “aesthetic” standards of supermarkets and large food stores.

These “misfit” vegetables include overly large zucchini (courgette), potatoes and other tubers in “odd” shapes, heads of cabbage whose leaves have split due to excess humidity, and carrots with two or more roots.

Although these vegetables are otherwise perfectly healthy and of good quality, they are considered unfit for sale and discarded.

“City dwellers have adopted totally insane criteria for consumption,” said Christian Heynmann, a farmer from the outskirts of Berlin. “A zucchini can be no longer than your hand, a cabbage that has split because of too much moisture is inedible, and carrots with three short roots instead of one long, perfectly conical root have no place in the kitchen,” he commented.

Heynmann collaborates with Krakowski and Brumsack, supplying them with vegetables that he would otherwise have to throw away, since supermarkets and other retailers would not accept them for sale.

“We created Culinary Misfits to use these ‘misfits’ in the kitchen on a daily basis, and to show the public the true face of nature, as well as dispelling this false belief that prevails in the city, that good vegetables have to be symmetrical, small and round,” Krakowski explained to Tierramérica. “We need to learn to eat the whole harvest.”

“We are not professionally trained cooks, but we can show the public that it is possible to prepare delicious meals with seemingly unfit vegetables,” added Brumsack. “Our goal is to recreate a sustainable culinary culture.”

Brumsack, Krakowski and Heynmann are just three faces of an emerging movement in Europe that is fighting back against the senseless waste of food.

Many farmers use “deformed” vegetables to produce juice or sell them to the kitchens of restaurants connected to supermarket chains.

This movement seems to have been spurred by, among other factors, the alarming revelations in “Global Food Losses and Food Waste”, a report published by FAO in May 2011.

“Roughly one third of the food produced in the world for human consumption every year gets lost or wasted,” the report states. “Industrialised and developing countries dissipate roughly the same quantities of food – respectively 670 and 630 million tons.”

In Germany, 11 million tons of food is thrown away annually, which works out to 135 kilograms per capita, according to figures from the Ministry of Food, Agriculture and Consumer Protection from March 2011.

Roughly 81.6 kilograms of food per person is wasted at the household level, while the remainder is thrown away by industry, trade and large-scale consumers.

Fruits and vegetables are the foods that are most commonly wasted.

As a result of the European economic crisis, there are a growing number of people, especially young people, salvaging still-edible food from supermarket and restaurant dumpsters.

This has led governments and supranational organisations to launch awareness-raising campaigns.

European Union (EU) Environment Commissioner Janez Potočnik has warned that unless eating and food shopping habits change, the bloc could waste more than 120 million tons of food in 2020, which is equivalent to 30 percent of regional food production.

But some organisations have been working for years to tackle the problem of food waste. In 2007, the non-profit Waste & Resources Action Programme (WRAP) of the United Kingdom launched the Love Food Hate Waste campaign, financed by the governments of Scotland, Wales, England and Northern Ireland, in cooperation with companies and non-governmental organisations.

The initiative includes a rigorous inventory of the food and drink thrown away daily by restaurants. As a result, many of these businesses have changed their routines and begun to reduce serving sizes and garnishes.

Some restaurants, particularly those which specialise in all-you-can-eat buffets or attracted customers with promises of extra-generous portions, have begun to charge diners a surcharge for the food that they leave on their plates.

Measures like these, combined with food price inflation, seem to have had a beneficial effect.

According to figures from WRAP, annual UK household food and drink waste fell from 8.3 million tons to 7.2 million tons between 2008 and 2011.

This avoided waste “would fill Wembley Stadium to the brim,” Richard Swannell, the director of design and waste prevention at WRAP, told Tierramérica.

But the squandering of food and the amount of waste produced by the food industry, especially in terms of packaging, continue to be major challenges.

“Food waste is an enormous problem that needs tackling throughout the whole supply chain,” said Swannell. “By working with companies and industry bodies, we can help consumers to take advantage of recent innovations and keep food fresher for longer.”

In other words, eating everything that is harvested – no matter what it looks like – is not enough. It is also crucial to revolutionise food marketing, reduce packaging, and re-educate the public so that they only buy the amount of food they really need.
* This story was originally published by Latin American newspapers that are part of the Tierramérica network.