RIO DE JANEIRO, Dec 23 2010 (IPS) - Living sustainably can be learned. That is the idea championed by two schools in the southern Brazilian city of Porto Alegre, where students are learning to become environmental citizens of the new millennium. 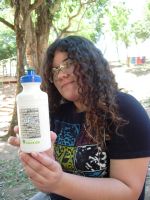 At the João XXIII School, it was the H1N1 flu alarm that prompted a change. To prevent the spread of the disease, last year the school administration replaced the usual drinking fountains with water coolers that use disposable cups.

But some of the students began to play with the plastic cups instead of using them for drinking. “It was a waste,” Gabriela Borges, 15, president of the João XXIII Student Union, told Tierramérica.

So the students suggested replacing the disposable cups, and now each student and staff member has his or her own plastic bottle — to be reused indefinitely.

Founded in 1964, with 915 students and run by a foundation established by parents, João XXIII intends to invest more in the project “O Mundo Passado a Limpo” (The Past World Made Clean).

“We want our students to be concerned about people and about the environment in which they live. That is, what is happening here where they are, not just in the forests,” assistant principal Maria Tereza Coelho explained to Tierramérica.

The school already had a vegetable garden and systems to process compost (organic materials) and to separate recyclable materials from trash.

In 2009, a study at the school, “Biodiversity: Know It to Preserve It,” about identifying the native and exotic species found in the school’s green area, won the attention of biologist Camila Rezendo Carneiro and agricultural engineer Sérgio Luiz de Carvalho Leite, professor at the Federal University of Rio Grande do Sul.

The school and the university joined efforts, and through an extension course Carneiro and Leite are guiding the students in their analysis of species. They will put together a bio-map and establish a nature path on the school grounds.

In 2011 they will construct a model of a city, which will be assessed based on environmental sustainability, ethics and cooperation, said geography teacher Arturo Bergelt.

The children will elect their “mini-mayors,” and will have to make decisions about such things as budget priorities.

The city is being planned with the help of an architect (the mother of a student), and will be built using recycled materials. In parallel, a science teacher will teach the students to build water heaters from plastic barrels. They will also have an “ecological” classroom that will function using sustainable practices.

The school administration did not give details about how much money is going into the project, but said the school has received donations in funds and materials from many people, as well as support from the university.

Another school-cum-city is operating in Porto Alegre. It uses real places, where students are elected mayor, city councillors and members of the Council of Justice. It has operated since September 2009 at the Israeli Brazilian College (CIB).

With 88 years of history and 750 students, the CIB made a leap when director Mônica Timm de Carvalho brought her experience in the northeastern Israeli city of Tzfat to Porto Alegre: a city-laboratory on 500 square metres located in an underused area of the school.

“Ir Ktaná” (small city, in Hebrew) is the result of a year and a half of debates about a broad educational project.

Construction is based on sustainability, with “green” roofs, windows and doors that optimise natural light, and productive use of rainwater.

At one end sits the Chamber of Councillors and the Mayor’s Office, with a pulpit that looks out over Citizens Plaza, where there is an assembly site, or market. On the Street of Peace is a synagogue where students can also pursue their interest in philosophy.

Along the Culture Path there is a library and a space for theatre and exhibits. Following the Path of the Future, one arrives at the Science and Technology Centre. The products grown in the city’s garden are sold at the EcoFair.

The bank operates using “irk” currency and finances businesses like the non-governmental Eco-Responsible Patrol, made up of children and adolescents.

The students learn mathematics, physics and other disciplines through practical means, creating initiatives in the Project Incubator or in the supermarket.

According to the principal, “the school is a space for discovering and fostering talents.”

The CIB administration also created the first continuing education programme within the school, in which teachers and professors keep apace with various topics, such as integrated project management and applied technology in education.

Equipment alone required an investment of about 34,000 dollars, and it costs approximately 2,800 dollars a month to keep the Ir Ktaná project running.