CHILE: The Environmental Fight Starts in Your Neighbourhood

SANTIAGO, Aug 23 2009 (IPS) - A working-class neighbourhood on the outskirts of the capital, which stood united against the dictatorship of General Augusto Pinochet in the 1970s and 1980s and today is doing so against climate change, is launching the country’s first “ecobarrio” project. 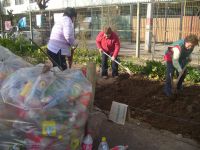 “An ecobarrio (eco-neighbourhood) is a place where people voluntarily join forces to revamp human relations and take ownership of public space in order to improve the environment and quality of life,” explained Luis Márquez, president of the Ceibo Cultural, Social and Environmental Centre, in the Villa Cuatro Álamos neighbourhood, located in the municipality of Maipú.

Maipú, Chile’s second most populous municipality, is situated on the west side of Santiago. In 2003, the Villa Cuatro Álamos neighbourhood began a process of ecological transformation. Three years later, when a landscaping student approached the community as part of her graduate thesis, it took on the guise of an “ecobarrio”.

“We are in the process of creating the first ecobarrio in Chile,” Márquez told this reporter. The project is constantly evolving and is borrowing some ideas from similar efforts in Europe.

Villa Cuatro Álamos was a low-income housing project for working-class families built in 1971 by the government of socialist President Salvador Allende (1970-1973), to be implemented in phases.

But the 1973 coup d’état that ushered in a 17-year military dictatorship thwarted the plans for the project, which covers 10 hectares and is home to 3,500 people. The neighbourhood includes 28 apartment blocks with a total of 808 50-square-metre units.

In the 1970s and 1980s, the community stood out for its active resistance against the military regime, but the sense of unity began to dissipate following the return to a democratic system in 1990.

Then, in 2003, the Santiago government decided to cut down 120 trees in a nearby park to clear space to build a secondary school. Protests by the local residents succeeded only in saving one tree, a ceibo, or cockspur coral (Erythrina crista-galli).

The next year, the park’s defenders founded the Ceibo Centre, and in 2005 they took over a project of the United Nations Environment Programme (UNEP) to set up a showroom for renewable energies and environmental education. From that moment on, the group has been successful in obtaining government and community funds to bring its ecobarrio plan to life.

Today, the Demonstration Centre has a greenhouse and an organic garden, as well as a bioreactor that produces organic fertiliser from compost in 20 days, which is then transformed into humus soil by introducing earthworms.

Since 2005, they have created a botanical garden, planting more than 500 native trees and bushes, as well as a plaza with fruit trees and a garden with medicinal plants.

Among children in the neighbourhood, “eco-leaders” and “eco-artists” are trained, and in the coming months a pilot project will begin to recycle water from dishwashers, sinks and bathtubs, and another initiative will separate garbage for recycling.

The residents of Villa Cuatro Álamos also want to install solar panels to run streetlights, and they hope to build an amphitheatre.

The Ceibo Centre and the Cuatro Álamos Neighbourhood Council are working with other organisations, like the Union of Maipú Women, who weave bags and table covers from discarded plastic bags, and an indigenous Mapuche group.

But the neighbourhood’s ecological transformation has not been easy, the participants admit. The volunteer effort is growing weary, there is an obvious lack of technical know-how, and the resources are limited for so many ideas.

Some residents have protested the changes in spaces that they previously used for parking, washing or repairing vehicles.

Citizen participation occurs at various levels, said Márquez. Some collaborate directly in specific efforts, while others only take part by voting. But the majority participates in recycling, he added.

The residents interviewed for this report agreed, however, that the project has not only helped clean up and beautify their surroundings, but has also strengthened the sense of community and curbed problems like drug dealing.

Based on the experiences of Cuatro Álamos and other neighbourhoods – Valle Verde and Esperanza – this year the municipality of Maipú has drawn up a policy and plan of action for five ecobarrios by 2012, said Mayor Alberto Undurraga.

The initiative is part of the Neighbourhood Development Plans that the municipality is drafting in an attempt to meet citizen demands and better focus community efforts and resources, said Undurraga.

Valle Verde and Esperanza are participating in the “I Love My Neighbourhood” (Quiero mi barrio) programme, promoted by socialist President Michelle Bachelet.

Alejandra Vio, executive secretary for the plan to improve 200 low-income neighbourhoods, explained for this article that “the environmental dimension is present in all the projects developed,” but that it is still too early to talk about ecobarrios.

At this point they are just getting started on “building appreciation of the concept of community and neighbourhood identity, and on re-weaving the social fabric,” she said.

But the “growing local concern about the environment” is already translating into “green initiatives” with economic objectives, like installing solar panels as a way to reduce the need for natural gas, Vio said.

The Ceibo Centre works closely with another Maipú neighbourhood, Villa Serviu, which the municipal government is also considering turning into an ecobarrio. Some 250 low-income families live there, in 39-square-metre apartments built in 1985.

Since 2006, the Neighbourhood Council has tried to obtain project funds to fight the serious problems caused by a hill of “pomacita” – pumice sand that contains toxic metals like lead, arsenic, chromium and cadmium – which rises like a wall in front of the apartment buildings.

Without considering the health impacts caused by exposure to those substances, a local construction company cut the hill in half and did not cover it to prevent erosion.

The dust that rises from the hill causes stomach, respiratory and skin problems, and leaves people’s homes under a constant layer of grime. The residents have worked to produce compost and humus soil in order to cover the hill with vegetation.

“With the plant cover, the dust has lessened by 70 to 75 percent,” said the president of the Neighbourhood Council, Vitelia Musrri, who would like to follow the model developed by Villa Cuatro Álamos. But to do so, “we would need double the support we’re receiving,” she said.

They have established organic gardens of medicinal herbs and planted fruit trees, and they separate out recyclable materials and reuse plastics.

Beginning this month, a free school of the Ceibo Centre will promote the creation of other ecobarrios across Chile, with the support of the Environmental Protection Fund of the National Environment Commission, the government environmental authority.

What is needed, according to Márquez, is a law to foment ecobarrios and a strategic partnership with the universities.

“The ecobarrio is a utopia. Some tell us that utopias never materialise. We believe it can be done, but we have to work hard for it,” said the president of the Ceibo Centre.