Detention in Italy Better Than Home in Tunisia 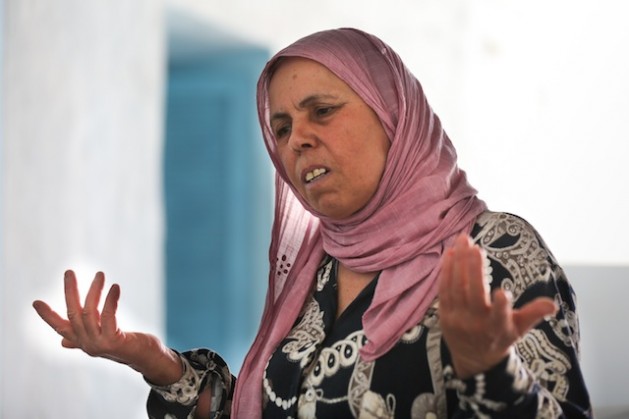 Aicha says her son has no option but to try to get illegally to Europe. Credit: Elijah Nouvelage/IPS.

GAFSA, Tunisia, Aug 28 2012 (IPS) - A year ago Salim, a 23-year-old from the ancient Tunisian city Gafsa decided to leave his country using a smugglers’ network notorious for transporting desperate Tunisian citizens to Europe by boat.

Salim became head of his household three years ago after his father, a wood-maker, died of lung cancer. Gafsa has historically been a rich city, but most of its inhabitants count themselves lucky if they can earn ten dinars (less than six dollars) a day for hard labour.

Illegal migration seems to be the only way out of a cycle of poverty and lack of opportunities for young men and women who see no bright spots in their future.

“On Jul. 3 (last year), a few months after the revolution in my country, I set off for Italy with 98 other people,” Salim told IPS.

It was almost Ramadan – the holy month of fasting for Muslims – when the hopeful migrants were loaded into a refrigerated container truck in Gafsa.

“We were instructed by smugglers not to bring any belongings, and we arrived at the Sfax seashore late at night. We could not see anything around us and were assaulted by other people using knives and machetes who wanted to get their family members on board the small boat,” he said.

“After a long ordeal, just as we were nearing Lampedusa, we were spotted by a plane bearing the Red Cross flag. Humanitarian workers took us to the island where we were welcomed, fed, and given blankets and clothing.”

Salim said he and the other ‘boat people’ were treated well by Italian authorities, but suffered greatly at the hands of the Tunisian army after they were forced to return to Sfax: returnees had their hands bound with ropes and were insulted and interrogated individually before being allowed to return to their towns.

According to the Italian Ministry of Internal Affairs, in 2008 alone close to 31,700 migrants arrived in Lampedusa, a 75 percent increase compared to the previous year.

Last year, in the aftermath of the January youth revolution in Tunisia that overthrew former dictator Zine El Abidine Ben Ali, some 44,000 people tried to escape to Italy.

Roughly 25,000 were Tunisian nationals but among the other ‘boat people’ were Libyans, Chadians, Nigerians and others from the African continent making the “dangerous journey to hope and a dignified life,” according to Salim.

Following his visit to Tunisia in June this year, François Crépeau, the United Nations special rapporteur on the human rights of migrants, advocated decriminalisation of the internationally sanctioned right to leave one’s country, as stipulated in Article 12 of the International Covenant on Civil and Political Rights (ICCPR).

Being sent back comes at a cost. Upon their return migrants are promised support and employment. But a year after Salim was dragged back to Tunisia he has received no formal assistance from the government.

He said it was regrettable that the first country to spark the Arab spring has failed to change its behaviour towards the poor, who continue to languish in pre-revolutionary poverty. “Maybe young people like us should go for a second round of revolution.”

“My son did not finish high school because he had to support his father at the wood-making shop,” Salim’s mother, 58-year-old Aicha, told IPS at the family’s humble home in Gafsa.

Aicha works at the local hospital kitchen, but hers and Salim’s wages combined add up to less than 120 dinars (74.5 dollars) monthly, which is scarcely adequate to feed her family of five.

“Letting him go was not an easy decision. I kept working hard and saved to give my share of the money to pay for the trip to Europe because I am deeply convinced that this is his only way out of poverty and trouble,” Aicha said.

Zaki, a 24-year-old Gafsan, had a similar story to tell. He used the same smuggling route as Salim in August last year, in particular to allow his younger sister to finish high school.

“She was a good student. I didn’t want her to end up a prostitute,” he told IPS.

He spoke of desperate conditions in Tunisia. “Life at Lampedusa’s camp felt sweeter than living unemployed in Gafsa,” Zaki said.

“There is absolutely nothing to do in Gafsa in terms of employment for young people like myself. I have worked in harsh conditions in all sorts of odd jobs to no avail. We cannot make ends meet. Therefore, my mother and friends helped me go to Sfax via Sidi Mansour, after paying 1,000 dinars (621 dollars) to make the journey to Europe by boat.”

He was loaded onto a fish refrigeration truck together with 120 other boat people, though the truck could only fit 45. Many people got sick and suffocated.

“We had all kind of problems, from assaults by armed gangs to the deficient boat water pump and battery, to the engine that caught on fire,” recalled Zaki.

Now he is back and the family must reimburse loans taken from friends and businesses.

Asked if they will be ‘Harraga’ again – a slang word used across North Africa to refer to those crossing illegally to Europe – Salim and Zaki said they have no other choice.

“You get to a point where your heart is dead. The only time I’ve felt happy and filled with hope was during my short stay in Italy,” said Zaki.

“The double standards applied by the administration and officials here make me sick. We have filled (numerous) forms and applications, all involving substantial fees, in order to get a legal visa. The same goes for employment: our applications simply remain in drawers and are forgotten and so are we.”