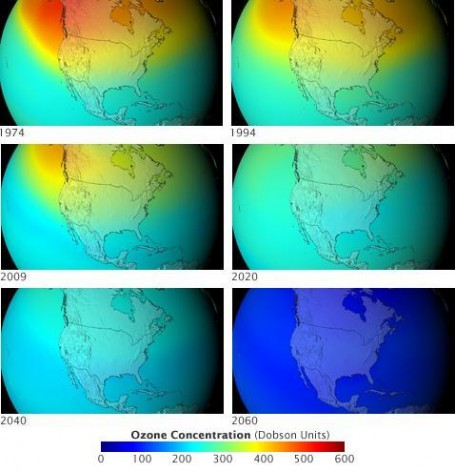 The ozone layer if CFCs hadn't been banned. Credit: NASA

UNITED NATIONS, Aug 2 2012 (IPS) - The Montreal Protocol, a climate treaty that gathers all U.N. member countries behind the goal of protecting the ozone layer, may not be the “most successful international agreement” anymore, as former U.N. secretary general Kofi Annan used to put it.

The treaty has achieved a great deal in the more than two decades it has been in force, with a 97-percent reduction in the consumption of ozone-depleting substances. However, it is now being widely criticised for worsening climate change by replacing those harmful chemicals with climate-threatening substitutes.

The total phaseout of chlorofluorocarbons (CFCs), which were widely used as refrigerants and had a high ozone depletion potential, has led to a climate protection bonus equivalent to 11 billion tonnes of CO2 reductions each year, according to the U.N. Environment Programme.

To put it in simpler terms, the Protocol had the annual environmental impact of one billion homes being completely off the electrical grid.

But this remarkable achievement is now being undermined by the chemicals that were used to replace CFCs: hydrofluorocarbons, known as HFCs, a group of “super” greenhouse gases. HFCs, which can be found in many products such as refrigerators and aerosols, are the fastest growing class of greenhouse gas and have an extremely high global warming potential, scientists say.

The situation is critical: without fast action to limit their growth, HFCs could annually contribute up to 20 percent as much to global warming as carbon dioxide by 2050, according to a recent press release by the Institute for Governance and Sustainable Development

The U.S., Mexico, Canada and Micronesia have taken a firm stance, proposing an amendment to the Montreal Protocol during the last meeting of state parties in Bangkok last month, which addresses HFCs.

“Phasing down HFCs is essential to… limit the adverse environmental effects, including effects on the climate system, of actions taken to protect the ozone layer,” according to the text submitted at the end of July in Bangkok.

But the discussion was cut short as the proposed amendment, which would have helped attain an equivalent reduction of 100 billion tonnes of CO2 by 2050, was blocked by India, China and Brazil for the fourth year.

The three powers delayed any potential action by arguing that the phase-down of the harmful chemical should be addressed under the Kyoto Protocol, since it is a matter of global warming and not ozone depletion.

But most parties think that since the growth in HFCs is a direct consequence of the Montreal Protocol, it is also the treaty’s duty to find climate-safe alternatives.

“The legal mandate of Montreal is not limited only to phasing out ozone depleters. It includes making sure the replacement compounds are safe, including for the climate,” David Doniger, policy director for the U.S.-based National Resources Defence Council’s climate and clean air programme, told IPS.

“HFCs would not exist without the Montreal Protocol,” Clare Perry, senior campaigner at the Environmental Investigation Agency, told IPS.

“(The Montreal Protocol) is also the body most experienced in phasing out these types of chemicals and has all the necessary institutions and procedures to do it effectively,” Perry added.

But political manoeuvring appears to be overshadowing the initial purpose of the treaty. The dissenters might just be trying to narrow the scope of the Montreal Protocol in order to act in their own financial interests, according to Perry.

“There’s clearly a reluctance to take on binding commitments to deal with HFCs,” she told IPS.

India and China are “the precursors of HFCs, and their industries are determined to continue making massive and increasing profits from these super greenhouse gases,” she added.

The decision to block the progressive phase-down of HFCs is not in line with the recent promises made by 192 state parties, including the three blockers, during the U.N. Conference on Sustainable Development that took place in Rio de Janeiro in June.

“We recognize that the phase-out of ozone-depleting substances is resulting in a rapid increase in the use and release of high global-warming potential hydrofluorocarbons (HFCs) to the environment. We support a gradual phase-down in the consumption and production of hydrofluorocarbons,” the final document, which was also signed by India, China and Brazil, stated.

“Apparently their commitment to safeguard the climate from HFCs had less than a one-month half-life,” said NRDC’s Doniger.

The matter must be addressed urgently, since global warming and ozone damage are “intimately connected”, according to James G. Anderson, a scientist and lead author of a recent study published by Harvard University.

More global warming leads to more storms, and those storms will increase the risk of ozone loss from convectively injected water vapour, the study found.

But phasing down HFCs is far from impossible, as was made clear at the technical conference that took place on the weekend prior to the meeting of the Montreal Protocol state parties, and which presented the wide range of options available.

“There are many climate-friendly alternatives to HFCS in pretty much every sector… and this would be some of the most cost-effective climate mitigation available,” Perry told IPS.

Reducing consumption in HFCs would also allow world leaders to achieve the seventh Millennium Development Goal, set in 2000, which strives to “ensure environmental sustainability” by 2015 through the Montreal Protocol.
If the 25-year-old international climate treaty – the most widely ratified in U.N. history – wants to restore its reputation, action needs to be taken, Perry warned.

“(The Montreal Protocol) is widely considered to be the most successful multilateral environmental agreement, however we believe that the best is yet to come and it needs to ensure it deserves this accolade by swiftly adopting measures to phase-out out HFCs,” she told IPS.