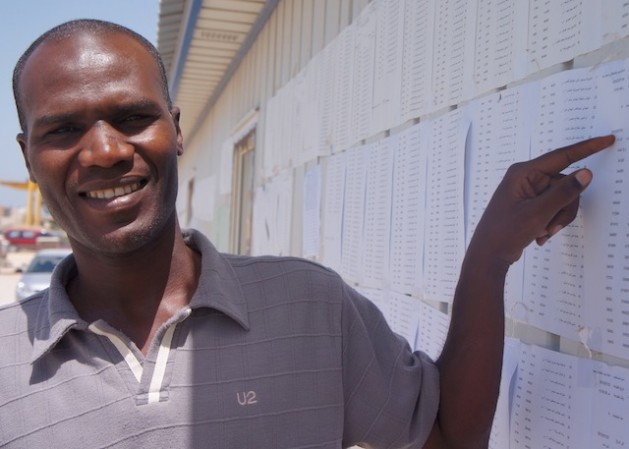 A Tawerghan with a list of internally displaced persons at the Fallah camp. Credit: Rebecca Murray/IPS.

MISRATA, Libya, Aug 21 2012 (IPS) - One year has passed since the Tawerghans fled their coastal town during Muammar Gaddafi’s violent overthrow, and displaced residents are still waiting for a chance to return.

“We were under heavy bombardment, many were killed, and we ran without belongings,” recalls Huwaida, a 23-year-old college student, who squats with 200 other Tawerghans in Tripoli’s derelict Fallah construction site.

Many residents of Tawergha, a town near the rebel stronghold Misrata, were believed to have supported the Gaddafi regime and fought against the rebels. The residents were mostly of sub-Saharan origin.

Her family and friends are scattered between Tripoli, Benghazi, and the southern desert town Sabha. Huwaida believes all 30,000 members of the Tawerghan community are being punished collectively for the bloody deeds of pro-Gaddafi fighters among them.

Neighbouring Misrata was one of the hardest hit during last year’s brutal conflict. After its liberation last August, Misrata militia drove nearly 40 kilometres east to Tawergha to exact revenge. They systematically searched and destroyed each deserted building, one by one.

The Tawerghan community has apologised to Misrata for their role in the fighting, signaling a willingness for reconciliation. They also voted in the Jul. 7 elections, with Tawerghan candidate Maree Mohamed Mansour Raheel winning an independent slot in the incoming national congress.

“The people of Tawergha acknowledge and apologise for what some of them did,” asserts Dr. Abdel Rahman Mahmoud, a local Tawerghan leader based at the Fallah site.

“The second step is whoever broke the law from both sides should be brought to court. The Misratans should give us the list of names of ‘wanted’ Tawerghans. This is what we are waiting for,” he says. “People are fed up this is taking such a long time.”

“There are two types of Misratans,” Mahmoud adds. “The youth and reckless who don’t want us to return. But the wise men and religious people do, and for this matter to end.”

Unable to work, they rely on charities and old government salaries for support. There has been a pattern of violent attacks by militia on internally displaced persons (IDP) camps in Tripoli and Benghazi. Fearful of abduction, detention and torture, Tawerghans avoid stepping outside the confines they live in.

For one year Huwaida’s family has occupied a shabby trailer at the Fallah site. Although a Turkish company abandoned the area at the onset of the revolution, the IDPs can be evicted as soon as the builders return.

On Mar. 2, the UN Human Rights Council’s Commission of Inquiry published a damning report on Misrata’s actions since the revolution:

“The Misrata thuwar (armed groups) have killed, arbitrarily arrested and tortured Tawerghans across Libya. The destruction of Tawergha has been done to render it uninhabitable. Murder, torture and cruel treatment, and pillaging, which occurred during the hostilities, constitute a war crime.

“Where they have continued since, they violate international human rights law. The torture and killing by Misratan thuwar would also, given the widespread and systematic manner in which they have occurred here, be capable of constituting a crime against humanity, and the facts indicate crimes against humanity have taken place.”

The blue Mediterranean Sea breaks gently along a deserted beach outside of Misrata. This stretch of white sand is the relaxing refuge of Ahmad El-Wash, 50, a local fisherman, avid book reader and wounded fighter during the revolution.

“The Tawerghans have no chance to return here,” he says calmly. “I was shocked what they did during the revolution. We cannot be stung twice.

“Libya is a big country,” he adds. “They can make a small town for the Tawerghans – somewhere in the south.”

The long, bloody battle in Misrata killed hundreds of residents and destroyed the heart of its downtown. But the most contentious allegations during the fighting were those of mass rape and torture of Misratans at the hands of Tawerghan fighters.

“Killing is not the big issue,” says Dr. Salim Beit Almal, the newly appointed head of Misrata’s local council. “It was the rape and torture. Rape is the red line for the whole thing.”

In April, International Criminal Court (ICC) prosecutor Louis Moreno-Ocampo visited Misrata to investigate the sensitive rape charges as part of a wider case against members of the former regime.

Ibrahim Beit Almal, director of Misrata’s military intelligence, waves a list of 3,000 ‘wanted’ Tawerghans that he says he gave to the current reconciliation committee in Benghazi over two months ago. He says he hasn’t heard anything since.

Dr. Salim Beit Almal blames the transitional government’s failure to address grievances. “If you are a victim and the government doesn’t act, then you are forced to take your rights by your own hand.

“Let me tell you frankly,” he says intently. “We know all Tawerghans are not criminals, without a doubt. But I think the government needs to build them a city far from Misrata. Tawerghans cannot live next to Misratans, at least for a couple years.

“The problem is they need protection and we cannot put a guard on every person. And we can’t control individuals. Imagine if they come back and a guy with a gun goes there and kills some Tawerghans. What would be the situation then?”

According to Bill Lawrence, an International Crisis Group researcher, the ‘wanted’ lists can illustrate steps being taken towards justice, and away from collective punishment. However, he warns: “If Libya stays in a retribution mode – even if you’ve got lists and are acting in a sanctioned and regularised way – this could go on for years and have very bad consequences. It could also unravel into local long-term conflicts.”

Back at the Fallah site, Mahmoud talks about growing up in Misrata, and the friends he had before the revolution.

One is Lt. Col. Ramadan Ali Mansur Al-Zurmuh, now head of Misrata’s military council. “He lost a son,” Mahmoud says. “I lost my brother, his wife and their children. The family is completely gone.” He sighs. “We have to deal.”