TEHRAN, Oct 25 2012 (IPS) - Amid growing and increasingly harsh criticism of his handling of the economy, talk of President Mahmoud Ahmadinejad’s removal has regained momentum in Iran in recent weeks. 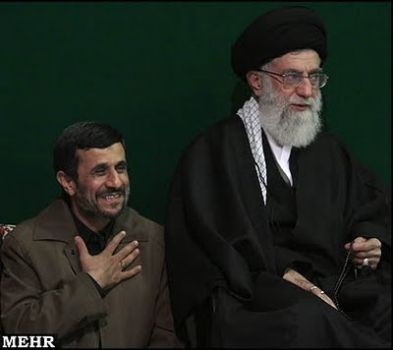 But, according to most observers, Iran’s supreme leader, Ayatollah Ali Khamenei, is unlikely to back any move to shorten Ahmadinejad’s term, which runs out in mid-2013, for fear that impeaching him will only wreak greater havoc on a political environment that is already highly polarised and contentious.

Over 100 members of the parliament, or Majlis, have signed on to a demand that the president be summoned to answer questions about the recent drastic devaluation of the currency. Runaway inflation, combined with rising unemployment, has rattled many MPs concerned with the devaluation’s impact both on the price of key imports and the cost of operating factories and agricultural enterprises.

If the president either refuses to appear or fails to explain his policies to parliament’s satisfaction, the issue may eventually be referred to the judiciary, which, would, in turn, clear the way to his removal before the presidential election scheduled to take place next June.

But even the MPs who have called for Ahmadinejad to testify are not optimistic that such a scenario is realistic. “Neither MPs have hope that such questioning will lead anywhere, nor the representatives of the government are trying to stop the process,” according to Etemaad Daily.

Calls for Ahamdinejad’s removal are not new. In mid-summer there were reports that two former members of Ahmadinejad’s cabinet – former foreign minister Manouchehr Mottaki and former interior minister Mostafa Pourmohammadi – had written a letter to Khamenei calling for the president’s removal.

Khamenei, however, has proved reluctant to criticise the president or acknowledge the severe economic woes the country faces. In the two weeks of intense volatility in the currency market, he even denied during a provincial visit the existence of an economic crisis.

He acknowledged that problems such as unemployment and inflation exist “like everywhere else”, but insisted that these problems can be overcome. “Nothing exists that the nation and officials cannot solve,” he said.

Khamenei’s positive take on the state of the Iranian economy is received with quite a lot of scepticism among the population. Many people see Khamenei as oblivious to the crushing burden of economic difficulties that increasingly dominate conversations at dinner tables, in cafes, and in the street.

Khamenei’s continued support for Ahmadinejad is also much discussed. Some prominent politicians, such as Deputy Speaker Mohammadreza Bahaonar, have publicly said that the Leader wants the government to finish its legal terms. “The cost of removing the president is more than us doing nothing for another year,” he said recently.

This is not a view shared by Ahmad Tavakoli, another prominent MP from Tehran. “Ahmadinejad’s period is over, and the continuation of his presidency is not positive,” he said this week, suggesting that he disagrees with Khamenei’s decision to tolerate Ahmadinejad until the end of his term.

There are other theories why Khamenei will continue to support Ahmadinejad. According to Ali, a journalist who asked only that his first name be used, Khamenei cannot back down from the support because he is unable to explain the costs his support of Ahmadinejad in the disputed 2009 election have imposed on the people and the country. “Khamenei prefers the current situation to acknowledging that he made a mistake,” Ali insists.

Reza, a 58-year-old political activist, sees fear as the explanation for Khamenei’s support for Ahmadinejad. He believes that Ahmadineajd’s penchant for creating “corruption dossiers” on key political actors “will eventually be directed at Khamenei’s family whose financial record is not without blemish.”

According to Reza, if pushed, “Ahmadinejad will reveal the information he has and this scares the Ayatollah. Through his support Khamenei is in effect paying for Ahamdinejad’s silence.”

In reality, Khamenei faces a complex situation. On the one hand, he must deal with the more public and harsher criticism of Ahmadinejad’s economic policies, and, on the other, the potentially destabilising impact of the president’s removal.

So far, Khamenei’s approach in balancing these two concerns seeks a third path, which, according to one political commentator, is “to take effective control of executive affairs and transform Ahmadinejad into a show president whose time is spent traveling abroad.”

The result can be seen in Khamenei’s conduct in the past few years. Until recently, Khamenei was always considered to be a “sitting Leader” whose annual trips to a designated province or public appearances were mostly limited to official events, such as the anniversary of the death of Ayatollah Ruhollah Khomeini, the Islamic Republic’s founder.

Since the end of the post- 2009 election protests, however, Khamenei has taken many more short trips. Earlier this year, for example, he comforted the family of an assassinated nuclear scientist at their home. He also took a quick trip to East Azerbaijan after the August earthquake while the president was in Saudi Arabia.

More significantly, he has been meeting with economic actors and their representatives in the Chamber of Commerce and Industry, eliciting their views and promising redress. One recently elected MP who did not want to be identified told IPS, “I send requests regarding my district’s needs directly to the Leader and not the president.”

A University of Tehran professor says that the roots of Khamenei’s increased activism can be found in Ahmadinejad’s extensive use of executive privilege and extra-legal powers to circumvent and marginalise other branches of the government, particularly the parliament.

According to the professor, however, Khamenei may also be engaged in unconstitutional conduct by interfering in the affairs of the executive branch. “Khamenei is as blameworthy as Ahmadinejad in weakening the rule of law and preventing other institutions from performing their supervisory task in relation to the executive branch,” he says.

Khamenei rejects these criticisms and said in April 2011, after he prevented Ahmadinejad from firing the intelligence minister, Heydar Moslehi, that “the office of the Leader has no intention of interfering in the decisions and activities of the government, unless it feels that an interest of the state has been ignored.”

These days, however, his words are received with scepticism. Maryam, a retired teacher, sees in Khamenei’s performance a desire to centralise power in his office. “He wants a weak president so that he can be in control and be in charge, and now he is in charge of everything. Why should he change the situation?”