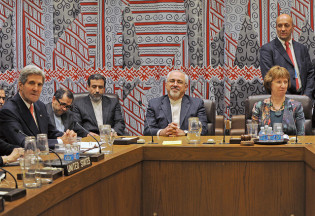 By Gareth Porter
Newly published recollections by the former French ambassador to Iran suggest that Iran was not running a covert nuclear weapons programme that it then decided to halt in late 2003, as concluded by U.S. intelligence in 2007.

By Yasaman Baji
The victory of Hassan Rouhani in Iran’s Jun. 14 election marked a significant shift in Iranian politics, occasioned by the forceful return of the two most important political factions of the Islamic Republic – traditional conservatives and reformists.

OP-ED: Iranian Elections: Not About Us

By John Limbert
For Washington, obsessed with matters Iranian, it may be hard to accept a simple fact: Iran’s Jun. 14 presidential election is an Iranian event. If we attempt to make it about us, we will find ourselves on the same road that has previously led to multiple failures: Iran-contra; “goodwill begets goodwill”; and a non-existent two-track policy.

By Yasaman Baji
The last-minute entry of former president and current chair of the Expediency Council Akbar Hashemi Rafsanjani into the presidential polls set for Jun. 14 has inspired vastly different reactions in a conflicted Iran.

By Yasaman Baji
As the five-day registration period for presidential candidates began here Tuesday, the question of whether Iran’s upcoming election will represent the will of Supreme Leader Ayatollah Ali Khamenei or the people of Iran is uppermost on many people’s minds, including those of the potential candidates.

By Yasaman Baji
Amid growing and increasingly harsh criticism of his handling of the economy, talk of President Mahmoud Ahmadinejad’s removal has regained momentum in Iran in recent weeks.
ADVERTISEMENT ADVERTISEMENT