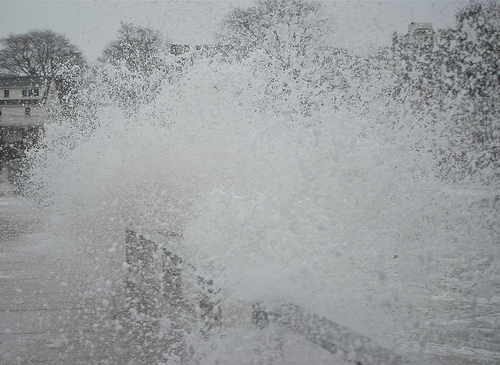 UXBRIDGE, Canada, Nov 8 2012 (IPS) - I am aware that my arrival last week helped re-elect U.S. President Barack Obama. Superstorms like me don’t play politics, but it should be clear by now that your refusal to tackle global warming has serious consequences. Higher sea levels and amped-up hurricanes like me are just two of them.

There is an awful price to pay for burning coal, oil, and natural gas, I’m sorry to say.

Nearly 200 people were killed in the 10 days I travelled from Jamaica to Canada. Most of the deaths were in the United States. The U.S. remains by far the largest emitter of CO2. With a fraction of the world’s population, the U.S. is responsible for nearly 30 percent of the world’s CO2 emissions from 1860 to 2009. On a person by person basis, U.S. citizens have one of the biggest CO2 “footprints”.

Some of you have known for a long time how dangerous CO2 is. The first international conference to address the climate-disrupting impacts of burning coal, oil, and natural gas was held 24 years ago. At “The Changing Atmosphere: Implications for Global Security”, your politicians and scientists concluded:

“Humanity is conducting an unintended, uncontrolled, globally pervasive experiment whose ultimate consequences could be second only to a global nuclear war”.

They accurately warned of a dangerous temperature increase without action to reduce emissions. (Conference summary statement)

Knowing all this, your oil, coal and gas corporations were allowed to grow to become the world’s most powerful and profitable industry. You gave, and continue to give, those corporations who are making the planet less habitable billions of tax dollars in subsidies.

Now there is so much CO2 in the atmosphere the entire planet is .8 degrees C (one degree F) hotter and that temperature will at least triple. This additional heat energy being trapped by the extra CO2 amounts to exploding 400,000 Hiroshima atomic bombs per day 365 days per year. This has spawned more and more destructive extreme weather events. This “new normal” will only worsen as more CO2 is released.

The refusal to tackle global warming has led to nearly 400,000 deaths and more than 1.2 trillion dollars is being lost every year mainly due to damage to food production and from extreme weather linked to climate change. Air pollution caused by the use of fossil fuels is also separately contributing to the deaths of at least 4.5 million people a year. These deaths and costs will only worsen with every additional tonne of CO2.

In human terms CO2 is forever. Your countries’ emissions today will disrupt the climate of your children, grand children and great grandchildren. To minimize the severity and intensity of flooding, droughts, destructive storms and crop failures your CO2 footprint needs to grow smaller and virtually disappear over the next few decades.

The US CO2 footprint has been getting smaller in recent years. The recession, closures of old coal plants and more natural gas has resulted in fewer emissions. Others are doing their part. The British are 18 percent below their emission levels in 1990 and aim to get down to 34 percent by 2020. The US is still well above its 1990s levels. This ongoing failure to act has cost the US its global leadership position.

This does not appear to be your future. The fossil fuel industry is too powerful and has instilled a fear of change amongst many of you. What you should be truly fearful of is the worsening of powerful storms that kill, the floods that destroy and droughts that will cause hunger for your children and your children’s children.

As you sow, so shall you reap.