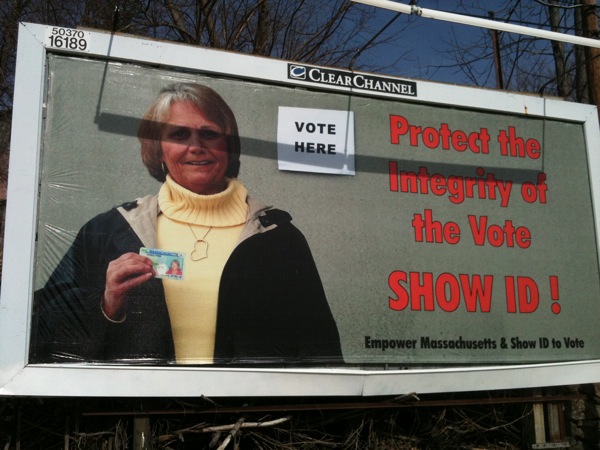 Posting billboards with misleading information about voter fraud is one of many voter suppression tactics. Above, a billboard in Massachusetts. Credit: amelia.louise/CC by 2.0

Whether these tactics will tip the outcome of the presidential race is uncertain, but they are likely to affect races at least at state and local levels during elections on Nov. 6.

Although no U.S. citizen can technically be deprived of his or her right to vote due to race, ethnicity or socioeconomic status, the majority of these tactics, driven in part by groups like the American Legislative Exchange Council, appear to be directed at black and low-income communities, as they have a disproportionate negative impact on voters in those communities.

“They’re trying to stop certain people from voting – communities of color, poor white people as well. People of less socioeconomic status, generally the elderly, students,” Helen Butler, executive director of the Georgia Coalition for the People’s Agenda, told IPS. “Those people are typically those who would be more disenfranchised.”

Butler said she thought the state of Georgia had served as “the testing ground for everywhere else”, adding, “I would say it’s gotten more intense.”

While poll taxes and literacy tests that were prevalent in the Jim Crow Era prior to the Civil Rights Movement and the passage of the Civil Rights Act are long gone, officials – primarily Republicans – in state legislatures across the country have ushered in a new wave of suppression tactics.

“I believe, whether it’s Republican or Democrat, they believe in stopping the vote for fear of people they have to contend with. They feel they can have a better chance of winning if there’s less people participating.  If more people are participating, there’s more of a chance because of their stance of issues, that they won’t get elected,” Butler said.

The southern state of Georgia is ground zero for voter identification laws. In 2006, Georgia was the first state to reduce the number of eligible forms of identification (ID) that voters can use to vote, from 17 to five.

Georgia’s law was approved under President George W. Bush by the U.S. Department of Justice (USDOJ), which can block election laws in states that have a history of racial discrimination.

Since then, eight more states have enacted extremely strict voter ID laws, including Indiana, Kansas, Mississippi, Pennsylvania, South Carolina, Tennessee, Texas and Wisconsin, according to a report by the Advancement Project.

The general trend of these laws is to require an unexpired government-issued ID in order to vote. Previously acceptable IDs in those states that have been eliminated include veterans’ ID cards, utility bills, student IDs issued by private universities, social security cards, and out-of-state and expired state IDs.

These more restrictive laws are currently in effect in five of those states – Georgia, Indiana, Kansas, Pennsylvania, and Tennessee – while others have not withstood the scrutiny of the courts or the USDOJ.

Last month, a judge ruled that Pennsylvania’s law could not go into effect for the Nov. 6 election. Officials there, however, have continued to run misleading ads suggesting otherwise.

South Carolina’s 2011 photo voter ID law, on the other hand, became the first election law to be blocked by the USDOJ in nearly twenty years, under administration of President Barack Obama. Texas’s law also was blocked by the USDOJ under Obama.  Both laws are now the subjects of ongoing litigation.

Meanwhile, Mississippi’s law has not yet been ruled upon by the USDOJ; and in Wisconsin the law has been enjoined by the courts but is still on appeal.

According to Butler, voter ID restrictions also have a special impact on rural voters. Butler raised concerns about low-income people in rural Georgia who don’t drive, “who would have to pay someone to take them to get documents they need and get photo ID”.

Because of the costs associated with obtaining these IDs, Butler called voter ID laws a “poll tax”, adding, “I think it’s a new Jim Crow”.

A plethora of tactics

States have employed many different methods in attempting to purge citizens from the ballot.

Some remove voters from the rolls if they haven’t voted in a certain number of years; if there is a discrepancy involving the state’s information regarding a particular voter in different state databases; if the voter is not believed to be a U.S. citizen but actually is; if the voter is believed to be a disenfranchised felon but actually is not; or if mail sent to the voter’s address is returned by the post office.

Meanwhile, in the last two years, Florida and Iowa have reversed executive orders issued by previous governors and made it more difficult again for ex-felons to regain their voting rights.

“In Iowa, in 2005, Governor Vilsack issued an executive order that automatically reinstated voting rights for all ex-offenders in the state. Prior to that, Iowa was a permanent disenfranchisement state; the only way around that was a gubernatorial pardon,” Marc Mauer, executive director of the Sentencing Project, told IPS.

But in 2011, a Republican governor was elected, and in his first month of office issued an executive order overturning the policy, Mauer said, noting that the 80,000 remained reinstated.

Similarly, in Florida in 2007, Governor Charlie Crist, a moderate Republican, changed the rules of what is called “executive clemency” to make it easier, in some cases nearly automatic, for ex-felons to regain their voting rights. As a result, 130,000 people regained the right to vote.

But in 2011, the new Governor, Rick Scott, a right-wing Republican, reversed the policy.

Mauer says other states have not done the same. “I think it’s more a quirky bump than a national trend,” he said.

In Georgia, for example, the legislature reduced early voting from 45 days to 21. “The Georgia Legislature changed it because too many people weren’t discouraged,” Butler said.

Florida has also restricted the number of days of early voting from 14 to eight, including eliminating voting on the Sunday before the election, when black churches have traditionally mobilised members to vote in an event known as Souls to the Polls.

“In Savannah, this organisation True the Vote has been telling voters in line that if you hadn’t voted since 2008, you are not eligible to vote, giving out erroneous information,” Butler said. In Georgia, one would have had to not voted since 2004 to now be off the rolls.

“Those things are there because of voter suppression. Some people [in Savannah] got upset and left because they thought these people knew what they were talking about,” Butler said.

“True the Vote has challenged some people at the Atlanta University Centre and saying they couldn’t vote because they were students and were out-of state,” Butler said.

True the Vote, which has trained and dispatched “elections observers” in at least twenty states, claims that concerns about voter fraud – that is, voters illegally voting – motivate their tactics. Indeed, elected officials have cited voter fraud as the reason they have passed voter ID laws.

However, a study by News 21, a reporting project of Carnegie Corporation of New York and the John S. and James L. Knight Foundation, examined public records and found that, only ten cases of in-person voter fraud have been reported in over the last decade, and that none have been substantiated.

In Ohio, a crucial swing state in the Presidential Election, at least ten billboards warning potential voters that “VOTER FRAUD IS A FELONY!  3 ½ YEARS AND $10,000 FINE,” have appeared in Democratic-leaning Cleveland.