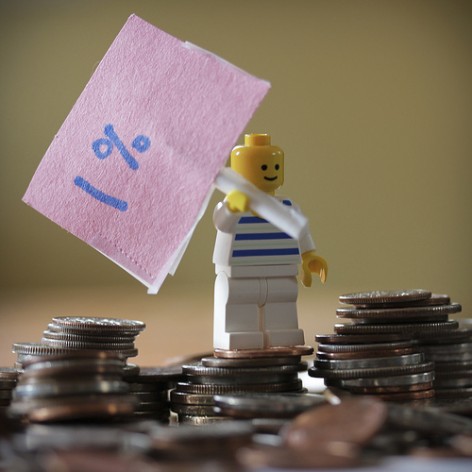 Between 2010 to 2011, average household income dropped by 1.7 percent for the middle fifth of the population, but rose by 5.1 percent for the top five percent richest U.S. citizens. Credit: The Great 8/cc by 2.0

WASHINGTON, Sep 13 2012 (IPS) - New research drawn from the past half-century offers one of the clearest pictures yet of the correlation between political involvement and socioeconomics in the United States, while underscoring the significant implications of recent legal and legislative changes for marginalised groups.

“From decades of data, we can say that socioeconomic status has an overwhelming impact on how politically active people are in the U.S.,” Sidney Verba, a research professor at Harvard University, said while introducing new research here in Washington on Wednesday.

“Every place we looked for what was driving inequality, we found the very central role of socioeconomic status. Even if you look at different groups that differ in their average political activity – minority groups, etc – you find that, within each group, it’s stratified by socioeconomic status.”

While those with higher socioeconomic status have more time to engage in political campaigns and related activities, for instance, Henry E. Brady, a political-science professor at the University of California, Berkeley, and one of Verba’s co-researchers, points to the “stunning, nearly exponential rise in political donations” by those with the highest incomes.

Even in 1990, Brady says, the top 20 percent of the population made 70 percent of all political contributions, figures that have almost certainly shot up significantly in the past few years in the aftermath of the Supreme Court’s Citizens United case, which allowed for unlimited private donations to political campaigns.

“If the folks at the bottom of the socioeconomic spectrum have different political priorities from those at the top, and if money in politics really has a big impact on politics, then politics is defined by those at the top and their concerns and viewpoints,” Brady says.

“That could be one reason why we don’t get (economic) redistribution in America. If in fact the parties are not appealing to those at the bottom but rather to those at the top, there’s no incentive whatsoever for redistributing income. In fact, there might be an incentive to cut the taxes of better-off people.”

Indeed, even as record amounts of money go into the current U.S. presidential campaign, new statistics on poverty from the U.S. Census, also released on Wednesday, show an almost unchanged picture from the anaemic findings of the past several years of economic recession.

Just from 2010 to 2011, for instance, average household income dropped by 1.7 percent for the middle fifth of the population – but rose by 5.1 percent for the top five percent richest U.S. citizens.

“These disappointing trends are on top of the worst business cycles on record,” Heidi Gould, with the Economic Policy Institute here in Washington, told reporters on Wednesday. “Having already experienced more than a ‘lost decade’, we’re now likely on our way to another lost decade.”

In the United States, trends on political inequality might be best indicated by lobbyist organisations, which push politicians to craft legislation in ways favourable to certain special interests.

Verba, Brady and Kay Lehman Schlozman, a professor of political science at Boston College, looked at records for some 25,000 lobbyist organisations registered in Washington over the past quarter-century.

As of 2001, Schlozman said on Wednesday, 12,000 of these groups were active, but just five percent were focused on any issue within a broad spectrum of “public good”. And just one percent were lobbying on behalf of less-advantaged groups.

Instead, 53 percent of those 12,000 were focused exclusively on business, which in turn account for 72 percent of all lobbying money.

Meanwhile, Schlozman says that in 2001 there were no lobbying organisations at all representing, for instance, underprivileged children, those awaiting trial on felony charges, or those receiving food assistance, to name just a few such groups.

“Further, no one who does unskilled work and who is not in a labour union – and that’s a substantial part of the labour force – has an organisation representing him or her in Washington,” she notes.

“And let me remind you, if you’re not at the table, you’re on the menu.”

In a democracy, of course, any policy is going to have winners and losers, given the structure of a democratic decision-making process. But Verba says that a democracy’s political ideal does not need to be equal output.

Recent moves by the U.S. Supreme Court and several state legislatures have, in the eyes of many, significantly exacerbated this situation of political inequality in the United States. In addition to the court’s Citizens United decision in January 2010, several states have recently passed restrictive voter-identification laws that opponents suggest will have a disproportionate negative impact on several marginalised groups.

Yet Verba’s analysis points to the longevity of this trend, suggesting that something deeper is at work.

“The main cause of this persistence is the embeddedness of political inequality in the major institutions of American life,” he says, listing family values handed down to children, the country’s school system, even the processes of marriage and getting a job.

“So this inequality is not something that is put on us by an elite. Rather, it’s something that grows out of the very country and nature of the institutions in which we live. That’s one of the reasons why it is very difficult to change.”

None of the three researchers express any optimism about how substantive change to the country’s political inequality could be brought about. In fact, the new analysis suggests that two possibilities that are often discussed in activist circles – the potentially transformative power of the Internet and of social movements – have actually been found to increase inequality.

“If anything, online activity is more highly stratified then offline activity,” Brady says. “And once we have everybody on the Internet, we’re not going to have anything that even looks like equality – we’ll continue to have these same inequalities we’ve seen again and again.”

Likewise, says Schlozman, the new research found that political activity that occurs in response to the types of everyday suggestions that constitute social movements “actually produces political voice that is even more tilted in the direction of the affluent and well-educated” than political activity taken on one’s own.

“It’s true that everyone in America has one vote, but money can be expanded incredibly – and under current rules, it is being expanded tremendously,” Verba says. “So, if anything, the ability to change things is going to be low in the future – and maybe is going down.”