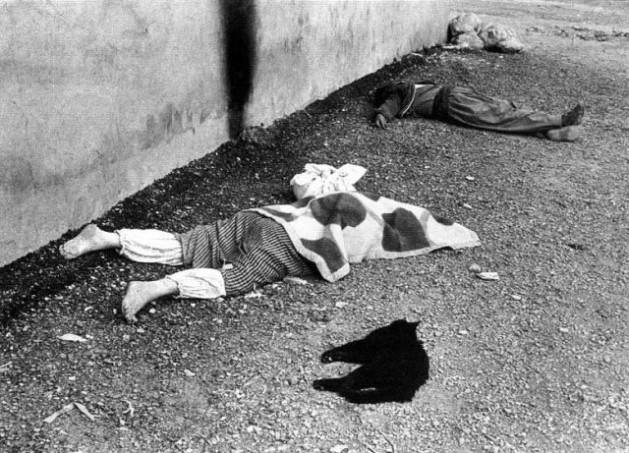 The Halabja poison gas attack took place on Mar. 16, 1988, during the closing days of the Iran-Iraq War, when chemical weapons were used by the Iraqi government forces in the Kurdish town of Halabja in Iraqi Kurdistan. Credit: Sayeed Janbozorgi/GFDL license

UNITED NATIONS, Dec 4 2012 (IPS) - The beleaguered government of Syrian President Bashar al-Assad, accused of readying its chemical weapons against rebel forces, is one of three governments in the militarily-volatile Middle East which has shied away from the international Chemical Weapons Convention (CWC).

The other two countries, Egypt and Israel, have also distanced themselves from the CWC, either for political or military reasons.

According to the United Nations, there are currently eight countries – Angola, Egypt, Israel, Myanmar (Burma), North Korea, Somalia, South Sudan and Syria – which have either refused or shown reluctance to commit themselves to the legally-binding prohibition against the manufacture, use and transfer of the deadly weapons.

As a result of the eight holdouts, the CWC has lacked universality, unlike most other key international treaties and conventions.

Asked whether this is an indication that some or most are in possession of chemical weapons, John Hart, senior researcher and head of the Chemical and Biological Safety Project at the Stockholm International Peace Research Institute (SIPRI), told IPS there are various reasons why states have delayed joining the CWC.

For states in the Middle East, one possible reason is a political linkage made over the years by some that all states in the region should verifiably renounce all weapons of mass destruction (WMDs, including nuclear, biological and chemical weapons).

More specifically, all states in the region should join the Nuclear Nonproliferation Treaty (NPT), they insist. Until it appears that a WMD-Free Zone is imminent in the region, said Hart, some have argued it is better to delay accession to the CWC.

This argument has lost some of its force in recent years, partly because some states in the Middle East region have in fact joined the CWC.

The administration of U.S. President Barack Obama says chemical weapons are a “red line” which Syria should not cross.

Addressing a nuclear non-proliferation conference in Washington Monday, Obama said, “The use of chemical weapons is, and would be, totally unacceptable.

“And if you make the tragic mistake of using these weapons,” he said, directing his warning at the Syrian president, “there will be consequences and you will be held accountable.”

The CWC, whose implementation is overseen by the Organisation for the Prohibition of Chemical Weapons (OPCW) in The Hague, currently has 188 states parties representing more than 98 percent of the world’s population and chemical industry.

In October, the CWC marked its 15th anniversary since entering into force.

Last month, U.N. Secretary-General Ban Ki-moon called for universality, urging the eight states to join the CWC which aims to eliminate the use, development, production and transfer of chemical weapons.

“This is held strongly and globally and even articulated by the highest possessing nations, the United States and Russia,” he said.

Lopez said the use of chemical weapons has implications and reverberations beyond the number of victims, primarily due to the horror of their effects.

The use of these weapons in the Iraq-Iran war by then Iraqi president Saddam Hussein turned Western opinion strongly against Iraq, although action against him was limited by the international community, said Lopez, a former U.N. advisor and an expert on U.N. war sanctions.

“I suspect that if Assad used (these weapons), such an act would become the justification for international intervention,” said Lopez.

He also said the blistering damage due to VX or nerve agents that Syria probably possesses could hit hundreds or thousands, if dropped from the sky.

Depending on proximity and wind patterns, it is a horrible death for those in close range, and a slower death for those in medium range who probably have limited medical care, while others will carry the scars for life and die later from immune system disorders.

SIPRI’s Hart told IPS another reason for non-accession to the CWC is the question of political priorities.

Israel signed the CWC and participated in the Preparatory Commission meetings prior to the CWC’s entry into force and also sent observers to the annual CWC’s Conference of the States Parties.

“This can be taken as an indication that, under certain broader geopolitical considerations, Israel would be willing to accede to the convention,” Hart said.

North Korea does not respond to OPCW efforts to engage in a dialogue concerning possible CWC accession.

“This partly relates to the broader geopolitical dynamics for that region. Much of this discussion is speculative, including with respect to motivations, capabilities and policies,” he noted.

Angola had observer status at the November Conference of the States Parties (CSP) in The Hague. This presumably signals a willingness and intention to accede to the CWC. Myanmar also sent an observer, Hart said.

There was some informal contact between OPCW and Syria about two and a half years ago to explore the parametres of possible CWC accession.

“This was done within the framework of continuing OPCW efforts to achieve universal treaty membership. The current instability has negatively affected this process,” he added, since Syria has been fighting a 21-month-old, stalemated insurgency.

He pointed out that the European Union has provided financial and other support for efforts to promote effective CWC implementation and universal treaty membership.