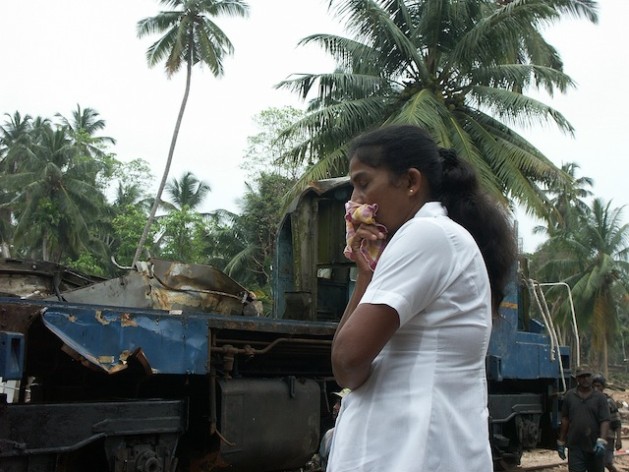 The devastation left by the 2004 tsunami has been a catalyst for countries to re-examine early warning dissemination. Credit: Amantha Perera/IPS.

COLOMBO, Apr 2 2013 (IPS) - Soon after the deadly tsunami struck Kesennuma city in the Miyagi Prefecture in Northern Japan on Mar. 11, 2011, 59-year-old Naoko Utsumi found herself on the rooftop of a community centre with only one line of communication to the outside world – the email option on her mobile phone.

Utsumi emailed her husband who in turn emailed their son in London, more than 9,500 km away. From London, the youth sent a direct message via the micro-blogging site Twitter to the deputy governor of Tokyo who initiated an air rescue not only of his mother but of more than 400 others who had sought refuge on the rooftop, according to a new report titled Connecting the Last Mile, The Role of Communications in the Great East Japan Earthquake from Internews, an international non-governmental organisation that works on issues related to media and information dissemination.

“New media like Twitter and Facebook are playing a much greater role in disaster preparedness and emergency response as we saw in Haiti and we are currently seeing in Syria: from letting people know you are alive to directing survivors to food distribution points,” Jacobo Quintanilla, Internews director of  humanitarian information projects told IPS.

Within the first hour of the waves striking, a Twitter user in southern Japan created the hash-tag that would later become the keyword on Twitter for those seeking or directing assistance.

Google launched its person finder tool after about an hour-and-a-half from the tsunami. The tool mobilised over 5,000 volunteers who uploaded  details of 600,000 records in the next one and a half months when the tool was available live. The Internews report said Facebook updates helped survivors and those looking for them exchange personal updates quickly.

That more than 11,000 Twitter messages hit the Internet every minute after 14.46 on Mar. 11 is a far cry from six years earlier when the Asian tsunami left a trail of destruction from Indonesia through Sri Lanka to the southern coast of India on Dec. 26, 2004.

Survivors in the eastern Sri Lankan village Maradamunai told visiting reporters they had no idea where to get assistance and details of the dead and missing even two weeks after the tsunami.

The death and destruction left by that Asian tsunami prompted countries like Sri Lanka to re-examine early warning dissemination mechanisms. The role of new media during disasters and the aftermath has now come into the forefront.

Experts in Sri Lanka say the best form of getting early warnings to thousands if not millions at once is mobile phones.

“Mobile communications is the most effective because of their penetration,” Indu Abeyarathane, the Sri Lanka Red Cross Society (SLRC) programme manager on early warning systems and responses told IPS.

Other experts believe that mobile and Internet communication could fill a major vacuum on early warnings and better forecasts in countries like Sri Lanka.

“Time after time there has been ‘communication failure’ rather than ‘prediction or risk assessments failure’ – there is a need for both timely and tailored information – with the potential for users to dig deeper and reach the information generators,” Lareef Zubair, climate specialist and principal scientist at the Foundation for Environment, Climate and Technology told IPS.

The Disaster Management Centre (DMC) set up through a parliamentary act to oversee disaster response at a national scale in 2005 now has access to the island’s largest mobile service provider, Dialog, to send out messages to its millions of subscribers. The last time the messaging system was used was on Apr. 12, 2012, when parts of the coast were evacuated due to a tsunami warning.

“It’s effective, given certain conditions,” Sarath Lal Kumar deputy director at the DMC told IPS, adding that the effectiveness of more sophisticated media like Twitter and Facebook would depend on a host of conditions from the geographic location to those who are most likely at risk. Even in Japan, they became far less effective when the victims were the elderly who hardly used new media.

The Internews report shows that despite their potential, Internet-based and mobile communications’ effectiveness is determined by the availability of power and their penetration.

In Sri Lanka, with around 11 percent Internet penetration, the web’s reach becomes negligible outside the urban areas, Kumar said. He said Sri Lankan authorities use a multitude of means to get early warnings out from deploying police units with loudhailers – as was the case in April 2012, early warning towers, DMC regional units and using other agencies like the Red Cross.

SLRC’s Abeyarathane said that it was difficult to determine which method worked better than others. It was essential to combine the old and the new, especially in countries like Sri Lanka where availability of technology can differ vastly from one point to another, he said.

Abeyarathane and Kumara both agreed that while it was good to enhance the early warning capacity by introducing towers and cell broadcasts, it was equally essential to set up such warning means over traditional media like TV and radio.

“It is always multi-platform, multi-channel approaches,” Quintanilla from Internews said.