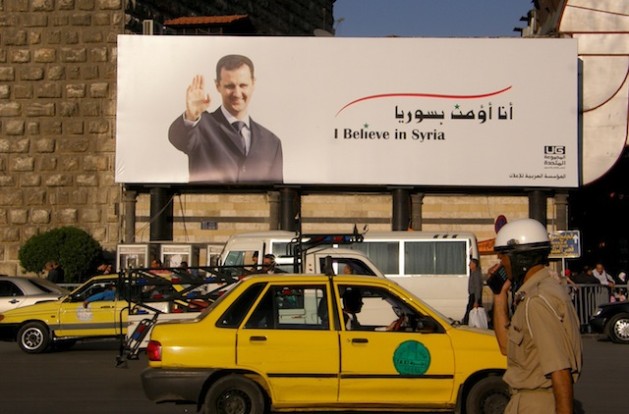 President Bashar al-Assad greets people from almost every street in the areas of Damascus that are under his control. Credit: Karlos Zurutuza/IPS.

ERBIL, Iraqi Kurdistan , Sep 3 2013 (IPS) - “Life is almost normal in the centre of Damascus,” local resident Hisham says from the predominantly Christian neighbourhood of Bab Touma. “Only the occasional noise of artillery on the outskirts reminds me that we are at war.”

The sound of artillery is now normal in Damascus. Hisham tells IPS on the phone from Damscus of the constant jams “due to the tight security measures” as well as increases in the price of food and fuel. But shops are still well stocked in his district, he says. This is an area where President Bashar al-Assad and his late father and former President Hafez al-Assad still fight for hegemony, which is depicted in street murals, on car windshields and even as souvenirs.

"Why has the West closed its eyes to the atrocities suffered by the Syrian people as a whole until now?” -- Khyder, a resident from the district of Mezzeh in central Damascus

“I feel like I’m living in some kind of golden cage: I go to the gym every day after work, I hang out with friends in the same places… But I know that just a mile away people struggle to survive in the worst conditions.” Like many in Damascus Hisham gave only his first name due to security concerns.

After a couple of years of war in Syria, downtown Damascus looks very much like Baghdad. The city centre is surrounded by a ring of concrete blocks guarded by tight security to protect Assad’s city strongholds from other areas that are divided, or already under control of the armed opposition.

The atmosphere is a good deal gloomier after the alleged chemical attack on Aug. 21 on the outskirts of the Syrian capital, and there have been warnings of missile strikes.

Last Saturday, U.S. President Barack Obama talked about a limited but strong operation to deter a future chemical attack. The American Congress is due to convene on Sep. 9 to discuss this.

Aram, a Bab Touma resident in his 30s, cannot hide his concern.

“I don’t support the attack and I’m not afraid of American bombs. I only fear they could pave the way to all the terrorists that are today trying to destroy our country.”

Today no one denies the fact that since the beginning of the uprising in March 2011, the Syrian opposition has been backed by numerous armed groups, many of which pay allegiance to al-Qaeda.

Salim Muslim, co-president of the Democratic Union Party, the dominant party among Syrian Kurds, claims that such alliances have already taken their toll.

“Today we cannot say that Assad is stronger, it’s simply that, after two-and-a-half years, the opposition is weaker. It is fragmented in a myriad of different branches with support from both outside and inside Syria [and is] diminishing by the day.

“The weakness of the Free Syrian Army makes it difficult for them to distance themselves from Islamic radicals because the latter have more military power.”

The situation in Saida Zainb, a working class suburb south of Damascus, hardly resembles that in Bab Touma. The area is a battleground between the government and the opposition. Many of its buildings have collapsed as a result of heavy shelling.

Hani Hosam, who openly supports the Syrian insurgents, says shops and stalls are being attacked by Assad loyalists in the district. Power cuts here are common, and supplies scarce.

Hosam doubts that there will be an intervention.

“An eventual attack will not favour any of the foreign countries’ interests. It will only bring destruction to the Syrian people,” Hosam told IPS on Skype. “The situation on the ground is very complex, and we badly need a peaceful solution.”

In Jaramana in east Damascus, another restive district, Naziha does not agree.

“The U.S. will attack because they need to fulfil their plan to control the region,” says Naziha, a Druze. She says the situation in her district is “not too bad.”

Naziha says she has supported the uprising since March 2011 but she fears the destruction an intervention would bring. Besides, she is not comfortable with Washington’s alleged support.

“We have to be careful. Even if the opposition ever manages to take control of the country, the United States will always try to control us.”

From the relatively calm district of Mezzeh in central Damascus, Khyder complains that the chemical attack has caught the attention of the international community, as al-Qaeda continues killing Kurdish civilians and committing all kinds of atrocities against Syrian Kurds.

Over the last few weeks, the predominantly Kurdish northeast is seeing fierce clashes between groups linked to al-Qaeda and Kurdish militiamen who have so far not taken sides either with Assad or the insurgents.

“Why has the West closed its eyes to the atrocities suffered by the Syrian people as a whole until now?” says Khyder. “Do Kurds, or anyone else, need to get gassed with chemicals to force an intervention?”

Khyder says it might already be “too late” for any foreign intervention. Ilya Topper, an Istanbul-based Middle East analyst, concurs.

“If there was a need for an attack it should have been conducted two years ago. At that time, the fall of Assad would not have affected the structure of Syria, the country would have maintained its Constitution and it could have become the first secular and more or less democratic republic in the so-called Arab world,” Topper tells IPS.

“Any attack meant to overthrow the regime and open the way for a military victory of the rebels will turn Syria into a theocracy ruled by clerics, similar to Iran. The same Iran that supports Assad so strongly.”