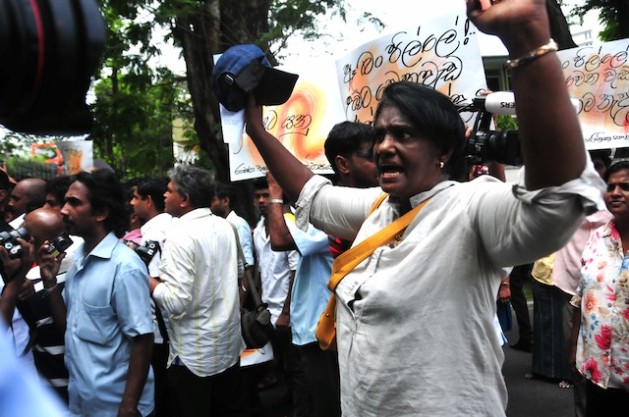 COLOMBO, Sep 3 2013 (IPS) - That it would be a visit fraught with diplomatic tension was undoubted. Navanetham ‘Navi’ Pillay, the United Nations High Commissioner for Human Rights, was into the third day of her week-long visit from Aug. 25 to Aug. 31 to Sri Lanka when her entourage broke into animated discussion.

They were in the heart of Mullaittivu district in Sri Lanka’s Northern Province (NP), where some of the bloodiest battles in the last chapter of the war between Sri Lanka and separatist rebel group Liberation Tigers of Tamil Eelam (LTTE) were fought in the summer of 2009, ending a conflict that had lasted almost 30 years.

The discussion was about media access. Several representatives of international media organisations in capital Colombo had followed Pillay 390 km to the north. At least two had trailed her right up to Mullaittivu, the second leg of her visit after a morning spent in NP capital Jaffna, 117 km to the north.

“We encourage people to come and see for themselves rather than be guided by propaganda.” -- Sri Lankan foreign minister Gamini Lakshman Peiris

While Pillay’s staff from the U.N. Human Rights Council (UNHRC) in Geneva was willing to allow the media, especially international correspondents, access to her meetings with war-displaced returnees and kin of the missing, officials of the U.N. country team were nervous.

And rightly so, as it turned out when Pillay ended her visit in Colombo four days later.

According to the Sri Lankan government, the U.N. office in Colombo had instructed the media not to follow the high commissioner during her visit to Mullaittivu. Yet they did so, presumably on the invitation of her spokesperson, Rupert Colville, to witness Pillay paying floral tributes to those who had perished in the final battle at Nanthikadal Lagoon in Mullaittivu.

As a Sri Lanka government media communiqué put it, “It was pointed out by the Sri Lankan side to the Office of the High Commissioner for Human Rights’ delegation that if such a gesture needed to be made, it should be done at a venue common to all victims of the 30-year terrorist conflict and not on the grounds where the leader [of the Tamil Tigers, Velupillai Prabhakaran] met his death.”

As it happened, Pillay never made that floral tribute. She later said she honoured those who died in conflict in every country she visited, and it was not meant as a unique gesture for Sri Lanka.

The visit concluded with no further incident or diplomatic discord. But by the time Pillay left Sri Lanka, the tensions were out in the open. In the five-and-a-half page parting statement she read out to the media just before her departure, Pillay, while lauding the Sri Lankan government for the development work it had initiated in the former LTTE strongholds, also called it to account for the continuing human rights abuse, the persecution of religious minorities and the militarisation of the north, among other things.

Pillay’s Sri Lankan visit was a follow-up on the recommendations of the crucial Mar. 21 U.N. resolution, seeking action from the government on lingering allegations of human rights abuse. And her assessment was scathing. “I am deeply concerned that Sri Lanka, despite the opportunity provided by the end of the war to construct a new vibrant, all-embracing state, is showing signs of heading in an increasingly authoritarian direction.”

The government of President Mahinda Rajapaksa dismissed it as a political statement on her part, something which transgressed her mandate and the basic norms “a discerning” international civil servant should observe.

“The judgment on the leadership of the country is better left for the people of Sri Lanka to decide, than being caricatured by external entities influenced by vested interests,” the government said in a counter-statement to the media.

“She has her own agenda,” said Ithakandhe Sadathissa, a Buddhist monk and head of the National Organisation of Ravana Power, a nationalist group that held protests outside the U.N. compound on two occasions during her visit. “She has come here to gather facts so that she can go back and criticise the country, the government,” he told IPS.

Others like housing and engineering services minister Wimal Weeravansha and government spokesperson and media minister Keheliya Rambukwella too accused Pillay of having a pre-set agenda.

“We encourage people to come and see for themselves rather than be guided by propaganda,” Sri Lankan foreign minister Gamini Lakshman Peiris had said during a visit to Indian capital New Delhi a few days before Pillay arrived. “We want the world to see what is happening in Sri Lanka.”

In the run-up to that visit, the government had set up a new presidential commission to look into forced disappearances and commenced work on bringing in stricter legislation against it.

The longest of her visits to 60 countries so far, Pillay managed to interact with a wide range of representatives, something she thanked the Sri Lankan government for.

In Jaffna, she met a group of 15 representatives from the 300-odd relatives of missing persons demonstrating outside the Jaffna Public Library. “It has been four years since the end of the war, people need answers to what happened to their loved ones,” said Rev Father Emmanuel Sebamalai, a Catholic priest from the northwestern Mannar district, who was among the demonstrators.

“They came to meet her because they felt that she could give them some redress,” he told IPS.

Apart from her field visits, Pillay also participated in an event commemorating the Day of the Disappeared in Colombo on Aug. 31. “The high commissioner has promised to help us,” Sandya Ekanaligoda, wife of cartoonist Prageeth Ekanaligoda, missing since January 2010, told IPS. “I will continue the search for my husband,” she said.

The concerns Pillay raised prior to her departure are likely to figure in the oral submission she will make to the UNHRC towards September-end. She is also likely to bring up allegations that police and military officials have visited civilians and activists she met and spoke with.

“Her report to the council will indicate whether the changes taking place in Sri Lanka are superficial or genuine,” Ming Yu, a researcher with Amnesty International, Australia, told IPS.