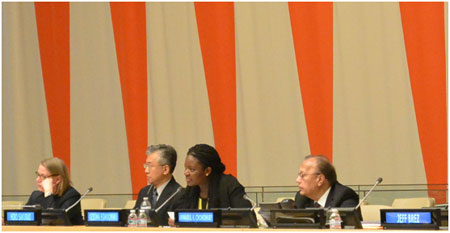 UNITED NATIONS, Apr 3 2014 (IPS) - For peace to be embedded in culture and society, it starts with childhood education which leads to the creation of global citizens, according to a panel of experts.

“The foundation for global citizenship is laid during childhood where they learn compassion and empathy.”

The concept of global citizenship is an individual’s awareness of the interconnected nature of the world and the need for a global focus for development.

Chowdhury said that to achieve such citizens there are four key elements – self-transformation, intergenerational dimensions, inclusivity and institutional support.

“Self-transformation links very closely with the concept of the culture of peace. It deals with the human mind. We are trying to change every individual into an agent of peace and non-violence,” he added.

Chowdhury’s leadership led to the U.N General Assembly’s adoption of the 1999 Declaration and Programme of Action on a Culture of Peace. Since then, he said that there has been a lot of interest from international organisations.

“[Since 1999] there has been a big mobilisation in civil society and the push for the global society. Since 2012 there has been a high level of focus on implementation,” Chowdhury told IPS.

“The member states and governments are a little slow as they have not yet put this agenda into their national policies but civil society is pushing hard and I believe there is a lot of interest now from international organisations.”

Chowdhury singled out the United Nations, the U.N. Educational, Scientific and Cultural Organisation (UNESCO) and the U.N. children’s agency UNICEF as organisations pushing for peace, education and sustainability.

“We are now seeing that this is the essential thing (education) for sustainability,” he added.

Vibeke Jensen, the director of UNESCO New York said that global citizenship education encourages people to become proactive contributors in promoting peace, tolerance and the culture of peace in a secure and sustainable world.

“Global citizenship education is a concept that articulates the purpose of education. It recognises the role of education in moving beyond the development of skills in order to promote social interaction.”

Jensen stressed that it is not sufficient to discuss the importance of this education but putting it into practice and monitoring it was essential too.

“It is not enough to talk about it or write about it in books or give knowledge. We need to go further to make sure that children and adults practice global citizenship,” she said.

She noted that although one of the Millennium Development Goals (MDGs) was achieving universal primary education by 2015, there are still about 57 million children who are not in school or do not have access to education.

“Monitoring figures have shown that 125 million children have spent more than four years in school but are still unable to read, write or do basic calculations.”

She added that universal global citizenship education could not be achieved unless all children have access to education.

“Peace cannot be gained by government actions alone. It’s individuals and communities that can sustain lasting peace. It rests on the persons capacity for non-violence and equality,” Chowdhury said.