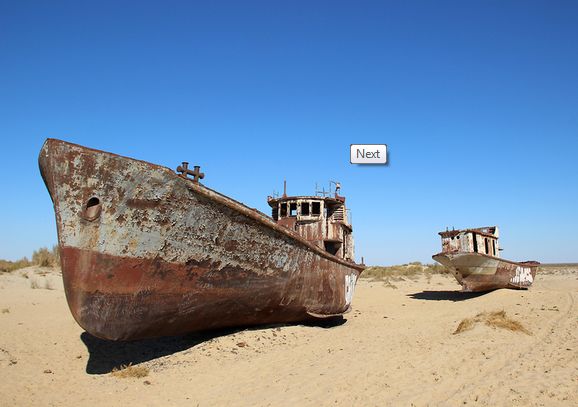 BISHKEK, Apr 15 2014 - “I’m going for a swim,” says Pelle Bendz, a 52-year-old Swede, as he rummages in the jeep for his bathing trunks. The other tourists look at him, bewildered. What’s left of the Aral Sea is reputed to be a toxic stew, contaminated by pesticides and other chemicals.

But the weather’s hot and Bendz insists his travel agency told him “swimming” was part of the package.

Activists have been jailed for exposing the disappearing sea’s impact on Karakalpakstan residents’ health.

In Nukus, the sleepy regional capital of western Uzbekistan’s Karakalpakstan region, local tour operators say the number of sightseers is growing each year. Many come to this remote part of the Central Asian country to see the famous Savitsky art collection. There are excursions to ancient fortresses and historic Khiva, once an important stop on the Silk Road.

But the Aral Sea – one of the world’s most infamous, man-made ecological disasters – is probably the top attraction.

Spring and autumn are most popular, but this year he even had a group in January. “More and more people seem to like it extreme,” Uteuliev tells EurasiaNet.org. The tourists are usually adventurous, not looking for a trip to the beach, but to see the famous lake before the last of the water is gone, he adds.

Bendz, the Swede, claims a special interest in unusual places. On a previous trip to Ukraine he visited Chernobyl, site of the 1986 nuclear accident. As he runs toward the shore, his feet sink in mud. The other two tourists and their driver follow him with their eyes.

The driver explains that over the course of only one year, the coastline has receded about 50 metres. The former seabed is still damp and covered with clams.

“You don’t even have to swim,” Bendz shouts, giddily floating on the water. In 2007, one estimate put the Aral’s salinity at 10 percent. As the sea continues shrinking, salt content is believed to have risen to about 15 or 16 percent, or half the concentration in the famously salty Dead Sea.

For local activists, the swell of foreign interest offers a chance to educate, as well as entertain.

In a hotel in Nukus, a group of Swiss tourists listens to a seminar about the history of the Aral catastrophe as part of their tour programme. The lecturer asks EurasiaNet.org not to print his name because he is implicitly criticising Uzbekistan’s authoritarian government.

He has a legitimate fear: activists have been jailed for exposing the disappearing sea’s impact on Karakalpakstan residents’ health. In 2012, one activist said she was beaten and threatened with forced psychiatric care.

During his presentation, the speaker shows satellite images and videos of fishing boats from the time when the fish-packed Aral Sea was one of largest lakes in the world. He describes the consequences of the water loss for locals: extremely hot summers, freezing winters, dust storms and lung diseases.

“Only the government can do something about it,” the activist says, describing wasteful irrigation upstream on the Amu-Darya River.

In his opinion, poor government management of water resources is the main cause of the environmental problems. Only about 10 percent of the water diverted from the river makes it to the fields, he says. The rest evaporates or leaks out of aging irrigation canals.

“People should [be required to] pay for the water, then they would save it,” he says.

Uzbekistan’s centralised agricultural plan aims to produce three million tonnes of cotton annually. To meet this target, officials require farmers to grow the water-intensive plant and press-gang residents to help with the harvest each autumn.

Environmentalists are also concerned that powerful international interests have little reason to save the Aral: Energy companies from China, Russia, Uzbekistan and elsewhere are drilling in the former seabed for natural gas. The tour group drives past their rigs the next morning, across a salt desert, to visit Muynak.

A generation ago, this former fishing village was a port at the southern end of the sea. Now it is about 100 kilometres from the water’s edge. Ships once anchored offshore are now popular tourist attractions, rusting, leaning over into the desert sand. Local children play on the graffiti-covered wrecks.

Only a few hundred kilometres to the north, on the Kazakhstani side, there is hope for the Aral Sea. There, a dike built with assistance from the World Bank in 2005 catches water from the Syr-Darya River, helping bring a tiny portion of the lake back and spawning a renewed fishing industry.

But the Kazakh side does not attract as many visitors, says a representative at Tashkent-based OrexCA, a travel agency specialising in Central Asia.

The agent says she receives occasional inquiries but no bookings to visit the lake in Kazakhstan. She thinks visitors are discouraged by the higher prices and also because Kazakhstani officials have removed so-called ghost ships, selling them for scrap. Instead she touts OrexCA’s “shrinking Aral Sea tour” on the Uzbek side.

The package includes visits to historical sites and, according to the agency’s website, is “designed for admirers of extreme tourism, adventurers and fans of exotic photography.”