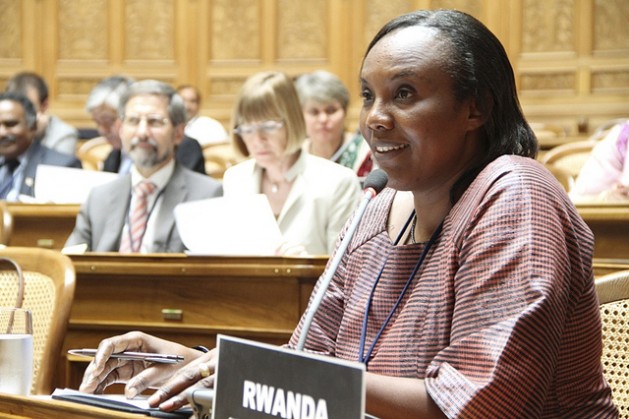 Rose Mukantabana served as Rwanda’s first Speaker of the Chamber of Deputies. The countries that achieved the greatest gender progress, between 1995 and 2015, in their single or lower houses of parliament are Rwanda, Andorra and Bolivia. Credit: Third World Conference of Speakers of Parliament/cc by 2.0

UNITED NATIONS, Mar 10 2015 (IPS) - Secretary-General Ban Ki-moon, a creature of the U.N.’s 193 member states and who serves at their will and pleasure, did not hesitate to fault 13 countries that kept women out of their national parliaments and governments in power.

“2014 saw little progress in the percentage of women in national parliaments worldwide, with the global average rising only by 0.3 points, begging the question: have we reached the glass ceiling?” -- Inter-Parliamentary Union

And then he went soft – refusing to name and shame them.

“I would not disclose the names here of those countries. I would strongly urge the leaders of those countries to change this unacceptable situation,” he said, speaking Monday at the opening session of the Commission on the Status of Women (CSW), the primary intergovernmental body mandated to promote gender empowerment.

But the Geneva-based Inter-Parliamentary Union (IPU), a global organisation of national parliaments, did not hesitate in singling out the 13 countries by name.

As of January 2015, the five countries without a single woman in their national parliaments include the Federated States of Micronesia, Palau, Qatar, Tonga and Vanuatu.

And the eight countries with no women in ministerial positions include Bosnia and Herzegovina, Brunei, Hungary, Pakistan, Saudi Arabia, Slovakia, Tonga and Vanuatu.

John Hyde, acting executive director of the Asian Forum of Parliamentarians on Population and Development, told IPS the United Nations and parliaments have to be open about failures to bring about equal opportunity and gender parity in parliament and the political process.

The Women’s Standing Committee of the Asian Forum of Parliamentarians on Population and Development, he pointed out, has backed moves to introduce quotas for parliaments as a proven intervention to lift female participation initially.

“In our Asia-Pacific region, we have to honestly acknowledge that we have two parliaments, Tonga and Vanuatu, without any women members of parliaments (MPs),” Hyde said.

Yet, he noted, Timor-Leste, one of the least developed nations in Asia-Pacific, has 38 per cent women MPs, assisted by a quota, exceeding developed democracies like Australia, New Zealand and Japan.

According to the IPU, all regions registered some increase in their share of women in parliament, the greatest strides being made in the Americas.

The countries that achieved the greatest progress, between 1995 and 2015, in their single or lower houses of parliament are Rwanda, Andorra and Bolivia.

In 1995, eight of the top 10 countries were European and five of those were Nordic, leading the IPU to create a separate category for this sub-region.

In 2015, IPU said, there is greater regional balance: four of the best performing countries are in Africa (Rwanda, Seychelles, Senegal and South Africa) and three are in the Americas (Bolivia, Cuba and Ecuador).

In a 20-year review of ‘Women in Parliament”, IPU said over the last 20 years, countries around the world have made substantial progress towards a 30-percent goal set by the 1995 Beijing Women’s Conference.

Still, “2014 saw little progress in the percentage of women in national parliaments worldwide, with the global average rising only by 0.3 points, begging the question: have we reached the glass ceiling?”

“We must compel our political leaders to answer harder questions,” she said.

Just how are they opening the political space for women to bring solutions to the table? How are they measuring progress for women? How are they implementing gender legislation, so that it moves from paper to practice? asked Susskind.

“To answer these questions, we can’t gloss over hard realities, as he did when he refrained from naming countries falling short on women’s political participation. To reach the goal of 50:50 by 2030, as the secretary-general stated, we need to shed light on what is working and what is not, learn those lessons quickly, and move to action,” she declared.

The secretary-general told women delegates that empowered women and girls are the best drivers of growth, the best hope for reconciliation, and the best buffer against radicalisation of youth and the repetition of cycles of violence.

“There have been important advances since the Beijing Conference. More girls have attained more access to more education than ever before. Maternal mortality has been almost halved. More women are leading businesses, governments and global organisations,” he said.

“At the same time, progress remains unacceptably [slow], and our gains are not irreversible,” he noted.

“We must build on the Beijing foundation and complete our work. I challenge all stakeholders to work together to achieve gender equality during the timeframe set by the new development agenda. Our goal must be 50:50 by 2030,” Ban said calling for parity between men and women.

MADRE’S Susskind told IPS the global women’s movement has succeeded in altering the terms of conversation.

“Now, world leaders are more ready to acknowledge that gender equality must be a priority. Some, like the secretary-general, are willing to say that women hold valuable solutions,” she added.