Subinay Nandy is the U.N. Resident Coordinator and the UNDP Resident Representative in Sri Lanka. He tweets at @SubinayNandyUN. More information about U.N. in Sri Lanka please visit www.un.lk 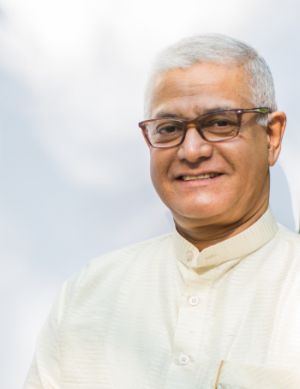 For 60 years of its 70-year existence, Sri Lanka and the U.N. have been engaged in a mutually beneficial and reinforcing partnership contributing to the growth and evolution of each other.

This strong partnership is an affirmation of the common values and the shared vision that unite Sri Lanka and the United Nations System in supporting not only the people of Sri Lanka but also those around the world.

Since independence in 1948, Sri Lanka has contributed to the U.N. system in multiple ways including its norm setting process. Sri Lanka has produced important U.N. professionals, including three Under-Secretary Generals and a Vice President of the International Court of Justice, to name a few.

These and other high level officials have played a vital role in international development by influencing global policy and thought-leadership in diverse areas, ranging from the law of the sea to disarmament, children in armed conflict, and climate change.

Thousands of Sri Lankan citizens have contributed, and continue to provide their noble services, to U.N. peacekeeping efforts around the world. At present, over 1,000 troops are deployed to important missions in Haiti, South Sudan, and the Central African Republic.

Many of the development priorities for Sri Lanka are well reflected in the SDGs, for example, focus on environmental issues together with specific goals on inclusivity, women’s empowerment, peace and good governance.

Sri Lankan policies adopted by successive Sri Lankan governments over the years have also served as a catalyst in promoting human development in many parts of the world.

I recall the year 1987 being declared by the U.N. as the International Year of Shelter for the Homeless, recognising Sri Lanka’s housing programme at the time.

Significantly, Sri Lankan welfare policies relating to free education and free health services have influenced global policy making over the past 60 years. Such policies continue to leave a marked impression in the international development sphere, especially in light of Sri Lanka’s achievements towards the Millennium Development Goals (MDGs).

For much of its contemporary history, Sri Lanka has been confronted with a plethora of challenges stemming from armed rebellions both in the North and the South, recurrent natural disasters and a deadly Tsunami of 2004, challenges associated with its progression towards higher levels of socio-economic development and integration to the globalised world.

Sri Lanka has shown remarkable resilience in facing these challenges and the United Nations is proud to have walked together with Sri Lanka in overcoming them.

Over the past years, the different U.N. agencies working on the ground have assisted Sri Lanka to deal with massive levels of human displacement induced both by man-made and natural disasters.

Our assistance has been at all levels of the displacement cycle from providing immediate humanitarian relief to recovery and long term rehabilitation of displaced persons. A special focus was also placed on restoring livelihoods and community and economic infrastructure in war-torn regions.

U.N. agencies have worked across different sectors to support Sri Lanka advance towards the high level of human development that it currently sees today.

We have focused on reducing income poverty across regions and sectors, ensuring food security, addressing high levels of malnutrition and minimising regional and gender disparities in educational and health attainments.

As an island nation and being in a region prone to natural disasters, the U.N. agencies have also assisted Sri Lanka address the issue of climate change and build resilience to the threat of natural disasters.

The latest MDG Country Report, jointly launched by the U.N. and the Government of Sri Lanka this year, demonstrates how well Sri Lanka has progressed in achieving the seven out of the eight relevant development goals that were agreed by the world leaders fifteen years ago.

With few setbacks in reducing malnutrition and ensuring environmental sustainability, Sri Lanka has achieved or is on track to achieve all other goals relating to eradicating extreme poverty and hunger, achieving universal primary education, gender equality and empowerment, reducing child mortality, improving maternal health, combating HIV/AIDS, Malaria and other diseases.

In September this year, the global community will agree on a new development agenda to guide and inform much of its work post-2015.  Subject to the outcome of the inter-governmental negotiations, a new set of development goals i.e. Sustainable Development Goals (SDGs) will replace the MDGs, whilst carrying on the focus areas of the MDGs, bringing in a greater emphasis on other areas.

Many of the development priorities for Sri Lanka are well reflected in the SDGs for example, focus on environmental issues together with specific goals on inclusivity, women’s empowerment, peace and good governance. The Secretary-General believes strongly that we have the opportunity to build on this existing foundation to further strengthen the partnership between Sri Lanka and the United Nations.

Needless to say that in this journey of 60 years, the benefits have not been one-sided: the United Nations system too has gained immensely from this partnership.

This complementarity between the local and the global is indeed a renewed moment in our relationship with Sri Lanka with opportunities for greater collaboration and strengthened partnerships. I have no doubt that our ties will emerge even stronger in the years to come.

Before I conclude, let me quote the opening preamble of the U.N. Charter: “We the people of the United Nations…” This clearly shows that people are at the heart of the United Nations, and I must note that Sri Lankan people, in particular, are and have been at the centre of the 60 year SL-UN partnership that we celebrate this year.

To recognise and acknowledge the Sri Lankan people who have contributed to the system nationally, regionally, and globally, the U.N. in Sri Lanka, together with the Ministry of Foreign Affairs, is delivering a year-long trilingual outreach campaign: ‘Our UN. Apey UN. Engal UN.’

Through this campaign, we reflect and celebrate our long-standing and mutually-beneficial 60 year journey with Sri Lanka and its people, affirming our commitment to a continued partnership.