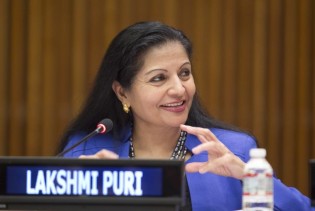 By Ian Richards
On Apr. 20, this year, four of my colleagues tragically lost their lives in Northern Somalia, when an explosive device ripped through their minibus as they travelled back to their guesthouse.

By Joan Russow and Lori Johnston
At key anniversaries of the U.N., there have been calls for compliance with international instruments.

By Jayantha Dhanapala
U.N. anniversaries are occasions for stocktaking - not all of it positive. But there is a lot of good that the U.N. has done and is doing and there are many good, dedicated people working silently but effectively within the U.N. system where I have also worked for a part of my long diplomatic career.

As the United Nations celebrates its 70th anniversary this year, culminating in a summit meeting of world leaders in September, IPS is running a series of articles on the trials, triumphs and tribulations of the world body – focusing both on the U.N.'s humanitarian and development work, and the increasing political paralysis of the Security Council.