Ian Richards is President of the Coordination Committee of International Staff Unions and Associations, representing 60,000 UN staff in headquarters and the field.

GENEVA, May 12 2015 (IPS) - On Apr. 20, this year, four of my colleagues tragically lost their lives in Northern Somalia, when an explosive device ripped through their minibus as they travelled back to their guesthouse. 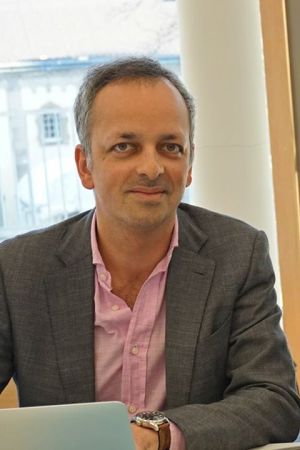 It wasn’t the first, nor unfortunately will it be the last time that U.N. staff are killed in the line of duty.

But for an organisation turning 70 this October, it is an uncomfortable wakeup call, and a reminder to the world, that behind the walls of its gleaming, newly refurbished headquarters in New York, its modern conference rooms and news-grabbing resolutions, are a staff of 75,000 drawn from all quarters of the globe, many working in difficult and dangerous locations, some paying with their lives.

Much will be written about the U.N.’s 70th anniversary (even though the bulk of it was created more recently). But for staff, the focus isn’t so much on the past as on the way forward.

For the culmination of this year’s anniversary is a summit of world leaders in New York to agree targets that will guide our work for the next decade and a half.

Called the sustainable development goals, they promise, among other things to eradicate extreme poverty, fight climate change, prevent conflicts and protect those caught in the crossfire.

No sooner than the ink is dry, governments will turn their attention to how the U.N. can best achieve those goals.

As a representative of U.N. staff, I believe that most of my colleagues are capable, suitably qualified and up to the task.

However, I do have doubts as to whether the U.N., on its 70th anniversary, is the best place for it.

Under his leadership departments have been restructured, pay and benefits are being reviewed, a new policy will require staff to rotate more between headquarters and the field, and a new IT system promises to eliminate duplication in administrative support.

But I’m not convinced that these reforms will make it any easier for staff to help the organization achieve the sustainable development goals.

Here though are three simple ideas that will. And I believe that Ban Ki-moon can easily put them in place.

First, he should encourage his staff to take greater risks and become more entrepreneurial.

The innovations and ideas that will help reduce extreme poverty by 2030 may not yet have been invented. But as things stand, with an increasingly centralised and bureaucratic organisation, it’s probably no longer at the U.N. that they’ll see the light of day.

Let me tell you then about a former colleague called Jean Gurunlian. He joined the U.N. as a junior clerk and retired as a director. In that time he built a team that created an electronics customs system, now used at ports and border posts in almost half the countries of the world.

By using IT instead of paper forms, Asycuda, as the system is called, reduced corruption, got goods through customs faster and in doing so, contributed to the creation of tens if not hundreds of thousands of manufacturing jobs in developing countries. It is also one of the U.N.’s biggest self-funded programmes.

That was in the 1980s and 1990s. No doubt Gurunlian faced his share of detractors back then when he presented the idea.

But I doubt today’s more centralised, rigidly budgeted and risk-averse U.N. could provide the right environment for the next generation of innovators – staff who are brimming with ideas, need space to try them out and forgiveness when ideas fail.

In any case, one thing is for sure: the staff rules now make it extremely difficult for junior clerks to rise through the ranks as Gurunlian did.

Second, if the U.N. is to support its staff in doing their work, it must provide a safer environment for those it deploys to the world’s most dangerous locations. Places such as Afghanistan, Gaza, Iraq, Mali, Syria, South Sudan and Yemen.

As the U.N.’s outgoing emergency relief coordinator, Valerie Amos, recently noted, “attacks on humanitarian workers have increased every year for more than a decade.” According to the U.N.’s own statistics, 100 staff and peacekeepers were killed in 2014.

Yet despite this and despite, for example, that Al Qaeda-linked al Shaabab has repeatedly attacked U.N. staff in Somalia and carried out attacks in Northern Somalia, our four colleagues died there last April.

The U.N. says it will “stay and deliver,” even in the most challenging environments when foreign embassies have evacuated their own staff.

But important as their work is, our colleagues can only assist those in the crossfire of conflict if they themselves get the protection they need.

We’ve been told that there is a tradeoff to be made between improving security for U.N. staff and being cost effective. Surely, cost should not be a factor when lives are at stake.

Only three percent of U.N. positions are at the entry-level grade called P-2. Worse, only 0.3 percent of staff are aged between 18 and 24. In contrast, the average age for joining the UN is 41.

Far from being structured like a pyramid, the U.N. looks more like a football. And as things stand, those graduating from university this year won’t even have joined the U.N. by 2030, the target date for the goals.

We will therefore miss out on the ideas and freshness that those straight out of university can bring to our organization.

This includes new methods of working, better use of technology, more effective ways to analyse and present information – everything to galvanise countries and other interests around the goals. That would be a shame.

So these then, in short, are three simple ideas that Secretary-General Ban Ki-moon could put in place this year and that will enable the UN’s staff to help it meet the ambitious targets set by the sustainable development goals.

By any measure, they are a fitting and worthy 70th birthday present.