UNITED NATIONS, Apr 21 2015 (IPS) - When the founding fathers of the United Nations met in San Francisco 70 years ago, an American banker named Beardsley Ruml made a remark: 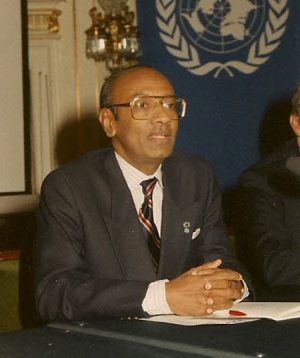 At 70, the United Nations perhaps is in a transitional phase from the pessimistic to the optimistic stage of expectations. In the interim, it has dealt with the entire gamut of human activity, and therefore not surprisingly in outer space activities ever since man ventured into outer space nearly 60 years back.

At the beginning, in the context of the Cold War, the concern of the United Nations was in preventing an extension of the arms race into outer space.  Since its establishment by the General Assembly in 1959, the Committee on the Peaceful Uses of Outer Space has been the focal point of international political and legal discussions and negotiations aimed at promoting international cooperation in space, and thus limiting an arms race in space.

Opportunities are quite clear as space-faring nations are pursuing ambitious new projects at a cost of many millions of dollars and new technologies emerge, enabling exciting applications such as harnessing solar power.

By an imaginative and innovative effort at international legislation within the United Nations, and through the arduous work painstakingly carried out over a period of time by the Committee, the General Assembly elaborated a set of multilateral treaties and legal principles, which provide the framework of international space law and policy that governs space activities.

The treaties embodied fundamental principles establishing that exploration and use of outer space shall be the province of all mankind and that outer space, including the Moon and other celestial bodies, is not subject to national appropriation.

They banned the placement of nuclear weapons and any other kinds of weapons of mass destruction in outer space, thus preventing an arms race in space. They have provided for international responsibility of States for national activities in outer space, liability for damage caused by space activities, the safety and rescue of astronauts, freedom of scientific investigation and the exploration of natural resources in outer space, as well as the settlement of disputes.

They encouraged the international cooperation in space activities and promotion of peaceful uses of space technology for the benefit all mankind.

The fact that these treaties were negotiated and concluded among rival space-faring nations during the Cold War, ratified by as large a number of states as any international treaty, and kept order in space for over half a century, is indeed no mean achievement.

The end of the Cold War and the subsequent changes in the international security environment raised new possibilities for the utilisation of space technology to promote international peace, security and stability.

The rapid advancement of space technology in the in the post-Cold War era, the increasingly widespread use of that technology for essential economic and social services, and the new international political environment led the international community to seize the opportunity to ensure that space technology is effectively used to promote security in all its forms – political, military, economic and environmental – for the benefit of all countries.

The United Nations and the specialised agencies developed new policies and programmes for the innovative use of space technologies for communications, information gathering, environmental monitoring and resource development for the benefit of all people.

Recognition that through its global reach and global perspective, space technology can make a vital contribution to promoting international security and those new initiatives should be taken to ensure that all countries have access to the benefits of space activities, led to the convening of three Global Conferences on Peaceful Uses of Outer Space (UNISPACE Conferences).

They offered the opportunity for all nations to share information on the possibilities of utilising space technology applications for developmental purposes. They also made all countries keenly aware of the dangers of dual use technologies and to take measures to promote peaceful applications ensuring international security.

The conferences, which were held at periodic intervals, helped assess the state of space science and technology with a view to taking a fresh look at their potential, especially for benefiting the developing countries. These global conferences laid down an agenda for nations to follow in the interim periods. They also established or revitalised existing programmes and mechanisms for sharing the benefits of space technology applications by all countries.

The United Nations itself took the leadership in the education and training of specialists in developing countries to enable them to establish or continue operating space applications programmes and institutions that are suitable to the countries concerned.

Seven Regional Space Education and Training Centers were established in Asia, Africa and Latin America that continue to operate with much success. A database was established to enable the dissemination of information on space applications for the use of developing countries.

A treaty-based register of space objects launched into space was established and all states launching space objects register their launchings with the the United Nations Office for Outer Space Affairs which is operating the register, thereby establishing their ownership as well as liability for such objects.

More recently, the ‘United Nations Platform for Space-based Information for Disaster Management and Emergency Response’ (UN-SPIDER) was established to ensure that all countries have access to and develop the capacity to use all types of space-based technologies and information to support humanitarian and emergency response during disaster management.

The United Nations through the specialised agencies has developed and operates several other programmes to assist nations in the orderly development of space technology applications.

At the inception, World Meteorological Organization (WMO) established the World Weather Watch which pioneered the use of space technology for weather forecasting. International Telecommunications Union (ITU) has developed and operates a detailed regulatory regime for the allocation of frequency and orbital slots for communication satellites and thus avoiding interference in satellite operations.

Much has been achieved so far, but much remains to be done in the next few decades as the United Nations look forward with optimism towards its century.

Opportunities are quite clear as space-faring nations are pursuing ambitious new projects at a cost of many millions of dollars and new technologies emerge, enabling exciting applications such as harnessing solar power, and commercial utilisation of the space station in producing newer forms of pharmaceuticals and hitherto unknown forms of materials.

At the same time, we are presented with new challenges as countries face mounting pressure regarding Earth’s environment and climate as traditional weather patterns are disturbed, with devastating floods and hurricanes killing thousands of people with the developing countries bearing the brunt of such disasters; and misuse or abuse of natural resources is a serious problem threatening food security.

These are compelling reasons for international cooperation in space activities as space technology is daily providing us with new tools in dealing with those challenges and opportunities, and the United Nations will have to continue its vital role as facilitator of that vital cooperation so that all nations can benefit from space exploration.