Suleiman Al-Herbish, Director-General of the OPEC Fund for International Development (OFID), writes that, as the United Nations marks its 70th anniversary, this is an occasion for reflecting on our unity as an international community to achieve a better world and an important time to recognise all the efforts in building improved lives and providing dignity to all.

VIENNA, May 14 2015 (IPS) - When, in 2003, Professor Richard Smalley, winner of the Nobel Prize for Chemistry, listed the top 10 problems facing humanity for the next 50 years in order of priority, energy was at the top of his list, followed by water, then food. 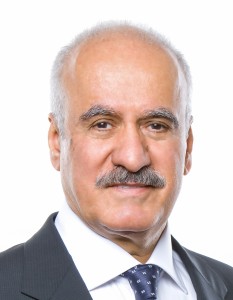 Years later, this energy-water-food nexus is central to the work of the OPEC Fund for International Development (OFID) and a core element of our corporate plan.

It is hard to imagine a better life when you are in darkness and the ‘heart of darkness’ is the widespread lack of access to reliable and affordable sources of modern energy. This darkness continues to impede socio-economic development worldwide.

Nothing is worse than seeing such darkness in the 21st century first hand. In Armenia, I visited the home of Ms Anahid, one of OFID’s many beneficiaries, whose house had recently been connected to a gas grid.

In her home, I saw a picture of her young son who had been tragically killed by a falling tree while collecting firewood. His young widowed wife sat in the corner and I had overwhelming mixed feelings: immense sadness for a life lost, yet relief that it would never happen again in that region.

It is a brutal moment when one realises the terrible human loss caused by energy poverty, and recognises how easily such tragedies can be avoided.

When one works in development, a single aim is in mind: putting people first. When we put people first, the facts are painful and implausible to ignore. The numbers are absolutely staggering: 18 percent of the world’s population still lives without electricity and 38 percent without clean cooking facilities.

If all of us think of these facts each time we switch on a light, use our phone or eat a meal, the darkness that 1.3 billion people live in becomes painful to imagine and hard to ignore.

“It is hard to imagine a better life when you are in darkness and the ‘heart of darkness’ is the widespread lack of access to reliable and affordable sources of modern energy. This darkness continues to impede socio-economic development worldwide”

Despite the work of so many valuable institutions, organisations and pledges, people are often forgotten, and the political will never materialises. Yet, when the will is there, things do actually happen, and believe me, for the past ten years, I have personally seen them transpire.

In 2007, through the Riyadh Declaration, at the third summit of the Organisation of the Petroleum Exporting Countries (OPEC), member countries charged OFID with spearheading the fight against the greatest constraint to development – energy poverty – and long before it became a mainstream topic, OFID pioneered its fight against it.

OFID recognised that universal access to energy was a vital element to achieving the Millennium Development Goals (MDGs) and dubbed it the “Missing 9th MDG”.

And when Kandeh Yumkella, U.N. Under-Secretary-General and the Special Representative of the Secretary-General for Sustainable Energy for All, said that “the fact that so many lives continue to be blighted by the absence of electricity or other clean fuels for cooking and heating is without a doubt a shameful indictment of modern society,” OFID found an ally.

We knew that they represented many like-minded individuals who had the will to make our shared fight against energy poverty recognisable to the world.

We were exultant when, in 2012, with the launch of the U.N. Sustainable Energy for All (SE4ALL) initiative, energy access was finally established as a global priority. Energy poverty had finally reached the global agenda and our work throughout the years has been instrumental in attaining energy access.

OFID has been a leading partner in SE4ALL since its inception and instrumental in shaping the proposed Sustainable Development Goals (SDGs) with the eradication of energy poverty as SDG7.

Our commitment to this mission has been practical as well as communicative. Our strategy for poverty eradication has been action-based with a revolving endowment of one billion dollars pledged by our supreme body, the Ministerial Council, in our 2012 Declaration on Energy Poverty.

Over the past few years, OFID has transformed its commitments into actions in the field. This has led the share of energy projects in OFID’s total operations to reach 27 percent in the past three years, compared with around 20 percent since inception. These resources have been distributed among 85 countries for projects ranging from infrastructure and equipment provision to research and capacity building.

As the United Nations marks its 70th anniversary, we reflect on the historical development of humanity and our unity as an international community to achieve a better world. It is an important time for us to recognize all the efforts in building improved lives and providing dignity to all.

As idealistic as I would like to be, I know there is much more to be done, and the fight is far from over.

What drives our motivation is OFID’s incredible will to continue. Where there’s a will, there is always a way.

I always said, and will continue to say: the day an institution like OFID closes its doors because of the lack of need from its partner countries to alleviate humanity’s countless problems is a day for us all to celebrate.

In the meantime, we will continue our efforts to power lives … one by one, until no single soul living on this planet is in darkness and no mother loses her son as Ms Anahid did.