Dr. Joan Russow is Founder of the Global Compliance Research Project, and Lori Johnston (Yamasi) is Chair of the Southeast Peoples' Center. 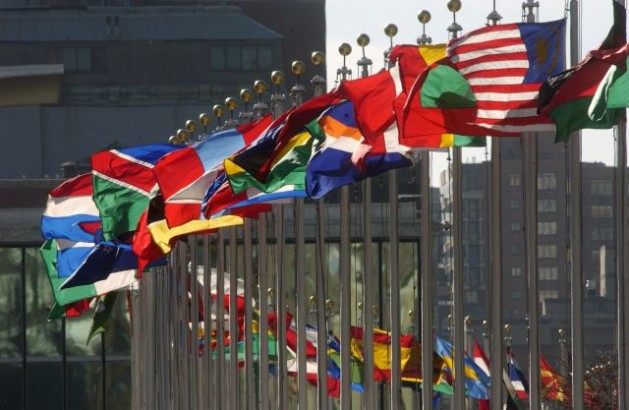 If states comply with these many instruments, the global community will have more respect for the rule of international law, and more faith in the United Nations, including for the compliance with and implementation of the SDGs. Credit: UN Photo/Joao Araujo Pinto

VICTORIA, British Columbia, Canada , Apr 27 2015 (IPS) - At key anniversaries of the U.N., there have been calls for compliance with international instruments.

Human welfare, ecology and negotiation must be a priority over global supply chains and "profit-driven" development through coercion.

In 2015, with the confluence of the Sustainable Development Goals (SDGs) and the 70th anniversary of the United Nations, COP 21, and the launch of International Decade for People of African Descent, there is an opportunity to again call upon states to sign and ratify international instruments, to determine what would constitute compliance with these and to undertake to comply with them through enacting the necessary legislation.

This could also be the time to advance and reinforce the concept of peremptory norms as stated in Article 53 of the Vienna Convention on the Law of treaties:

Peremptory norms have been described as those derived from treaties, conventions and covenants which have been ratified by all states or by most states representing the full range of legal systems and the major geographical regions. Also, peremptory norms could be derived from U.N. General Assembly Declarations and Conference Action Plans.

International Covenants such as on Civil and Political Rights (ICCPR) and its protocols, on Economic, Social and Cultural Rights (ICESCR); Conventions such as Law of the Sea (UNCLOS), on Torture (UNTC), on Biological Diversity (CBD) and its protocols, on Endangered Species (CITES), on Climate Change (UNFCCC), on World Heritage Convention / WHC), on Desertification (UNCCD), on Ozone (MP),on Rights of the Child (CRC), on Women (CEDAW) and its protocols, on Racial Discrimination ( (ICERD), on Genocide (CPPCG) on Rights of Migrant Workers, on Labour (ILO), on Transnational Organized Crime and the Protocols Thereto (CTOC) on Persons with Disabilities(CRPD); Declarations such as Rights of indigenous Peoples DRIP; peace Treaties, such as NPT, Comprehensive Test Ban Treaty (CTBT), Anti_Personnel-Mine-(APM), Cluster Munitions (CCM), Arms Trade (ATT). Respect for the jurisdiction and decisions of the ICJ, and the ICC Rome Statute are paramount.

If states comply with these many instruments, the global community will have more respect for the rule of international law, and more faith in the United Nations, including for the compliance with and implementation of the SDGs.

Eradication of poverty and the provision for food security coalesced U.N. members behind the SDGs. Ratifying these instruments would be a step toward achieving all of the Sustainable Development Goals, as these instruments will further true security.

At Rio 2012, states were reluctant to address the need to determine what would constitute adhering to key Rio Declaration principles, including the precautionary principle and principle of differentiated responsibility, which needs financial investment in developing economies.

“Innovative financing” for implementation of the SDGs

From the 1969 to 1992, U.N. States affirmed the need to move towards disarmament and the reallocation of military expenses for the benefit of humanity and the ecosystem.

In 1969, member states of the U.N. called for the achievement of general and complete disarmament and the channeling of the progressively released resources to be used for economic and social progress for the welfare of people everywhere and in particular for the benefit of developing countries (article 27 (a) XX1V of 11 December 1969 Declaration on Social Welfare, Progress and Development); and in 1992,

They made a commitment to reallocate resources at present committed to military purposes (Article 16 e, Chapter 33, “Innovative financing”, of Agenda 21, UNCED).

The SDGs need to redefine what constitutes “true security.”

In 1982, Olaf Palme, in the Commission Report on Disarmament and Security, introduced the concept of common security which could be extended to embody the following objectives:

To achieve a state of peace, and disarmament, through reduction of military expenses;

To create a global structure that respects the rule of law;

To enable socially equitable and environmentally sound employment, and ensure the right to development and social justice;

To promote and fully guarantee respect for human rights including labour rights, women’s rights civil and political rights, indigenous rights, social and cultural rights – right to food, right to housing, to safe drinking water and sewage treatment, to education and to universally accessible not for profit health care system;

To ensure the preservation, and protection of the environment, the respect for the inherent worth of nature beyond human purpose, the reduction of the ecological footprint and the moving to away from the current model of unsustainable overconsumption.

Arriving at universal support of existing instruments will let the U.N. uphold the three pillars of the SDGs: economic development, social development and environmental protection.

Human welfare, ecology and negotiation must be a priority over global supply chains and “profit-driven” development through coercion.