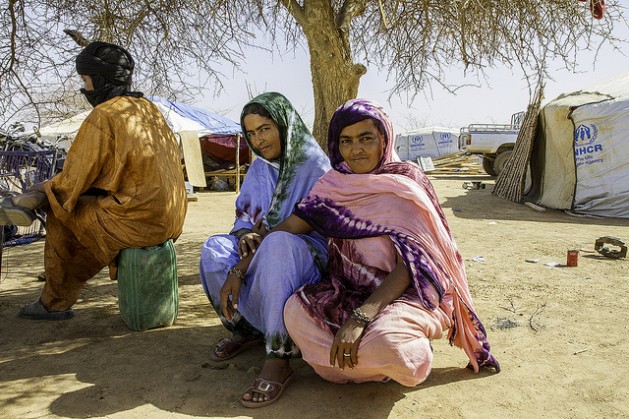 Ramatou Wallet Madouya (r) and her sister Fatma (l) in Goudebo camp, Burkina Faso on Feb. 14, 2013. They are two of many Malians who fled the fighting in their country. Credit: Marc-André Boisvert/IPS

UNITED NATIONS, Jul 31 2015 (IPS) - “Let us remember that behind every story, every figure, every number, there is a person – a girl, a boy, a parent, a family,” Anne Christine Eriksson, Acting Director of the U.N. Refugee Agency (UNHCR), said at a panel discussion at the U.N. on Thursday.

Amidst the rising numbers of people forced to flee their homes, the event, titled on “The Plight of Refugees and Migrants: Assessing Global Trends and Humanitarian Responses,” aimed at raising awareness of the current global refugee crisis and discussing the most important challenges linked to it as well as ideas on how to tackle it.

As emphasised throughout the discussion, worldwide displacement is at the highest level ever recorded due to new and ongoing conflicts, persecution and poverty. According to UNHCR’s recently released annual “Global Trends Report: World at War”, the number of people forcibly displaced reached a record high of 59.5 million by the end of 2014. This number was 51.2 million one year earlier and only 37.5 million a decade ago.

Apart from that, 2015 has also proven to be the deadliest year for migrants and asylum seekers. Over 900 migrants died in just a single incident in April 2015. One month later, thousands of fleeing Rohingya muslims were facing death from starvation in East Asia.

The international response to such crises has been inadequate, Maleeha Lodhi, Permanent Representative of Pakistan, said in her opening remarks.

“The international community to its shame has ignored massive human suffering in the past and the U.N. is not without blame in this regard. We are reminded of Rwanda and Srebrenica among other crises. And the current crisis of refugees could mark a new flag of shame.”

Speaking about challenges in addressing the global refugee crisis, participants and panelists highlighted in particular the strains on refugee-hosting countries in terms of infrastructure and education. Fears were also expressed that the mass movements would lead to spill-over effects and threaten the security of the whole region.

In this respect, lacking international solidarity in terms of burden-sharing was declared a major concern. Further problems expressed were donor fatigue and rising hostilities towards migrants on top of their human suffering.

Peter Wilson, Deputy Permanent Representative of the United Kingdom to the U.N., named three examples that might represent upcoming opportunities to resolve the crisis. First, Goal 16 of the Sustainable Development Goals (SDGs), building peaceful and inclusive societies, which can be used “to tackle the causes of these problems and not just the symptoms”, second, the 2016 World Humanitarian Summit in Istanbul which brings together both the humanitarian and the development community and third, new innovative concepts such as providing migrants with direct cash.

Other ideas expressed during the discussion involve cooperating with all stakeholders concerned, including host governments, authorities on regional, local and national levels, the U.N. system as well as development organisations and international financial institutions such as the World Bank and the donor community.

Moreover, reframing the refugee crisis as security issue might help to convince voters and parliamentarians to spend more money on solving the crisis as an investment in security and thus allow for additional funding.