Gang-Raped and Nowhere to Turn

Agnes Odhiambo is a senior women’s rights researcher at Human Rights Watch and author of a new report, “I Just Sit and Wait to Die: Reparations for Survivors of Kenya’s 2007-8 Post Election Sexual Violence". 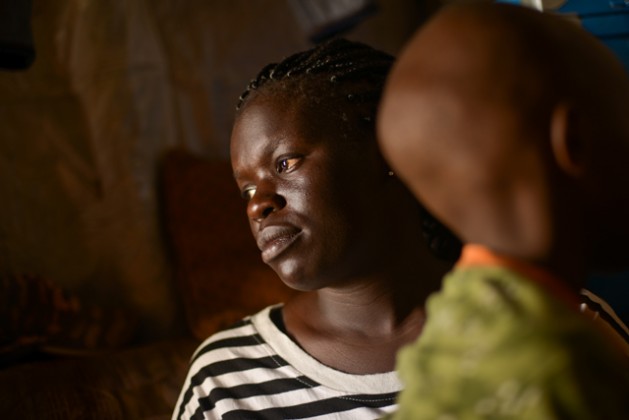 Fatma W. with her 7-year old son born from rape. Atieno was 17 when she was gang-raped at their home in Nairobi by three men who accused her family of hiding men from the “enemy” tribe. She stopped going to school after the rape. Fatma said her neighbors stigmatize her son because he was born from rape. Credit: © 2015 Samer Muscati / Human Rights Watch

NAIROBI, Kenya, Feb 16 2016 (IPS) - Owuor P.’s 16-year-old sister Nekesa tried and tried to get an abortion after she was gang-raped and found herself pregnant during Kenya’s post-election violence in 2007-8. “We are not sure how many raped her,” Owuor told me. “She told us that she saw three men rape her and then she lost consciousness. She was quiet most of the time after the rape.” In desperation after the birth of the child, she killed herself. The baby survived, and today Owuor is raising the child, who has a serious mental health condition, and is still grieving for his sister.

Nekesa was not able to have a safe abortion, even though she was the victim of a terrible crime. Kenyan law prohibits abortion except when the life of the woman is at risk and so Nekesa’s family, along with the hundreds of women and girls raped during the post-election violence, are forced to live with the painful consequences of unwanted pregnancies.

I interviewed 163 women and girls who suffered sexual violence during that post-election period, and found that hundreds are still suffering serious physical and mental health injuries, poverty and social exclusion. Our research also shows that the Kenyan government has not properly acknowledged this group of victims or provided them with justice or the health services they urgently need.

The violence that rocked Kenya over eight years ago killed 1,133 people and displaced another 600,000. Many people were left with lifelong disabilities from their injuries. There was widespread destruction and looting of homes and other property, and expulsion of people from their homes. The widespread sexual violence against women and girls—and to a lesser extent, men and boys—was less visible than other abuses, but was just as devastating.

Of the women and girls I interviewed, 37 became pregnant as a result of the rape. None of them were able to get a safe abortion. Some had illegal and unsafe abortions and eight years later, were still struggling with the health consequences. Others told me about their feelings of shame and guilt because of the stigma attached to abortion in Kenya.

I also spoke to women who had to give birth and who now live with ambiguous and conflicted feelings toward their children, who themselves often face stigma, rejection and verbal and physical abuse from their families. “I abused my child … I used to beat her very badly,” Adhiambo told me. Adhiambo was raped by a group of men and beaten unconscious. She told me that she has recently received counseling and her relationship with her daughter has begun to improve. Many other mothers of children born from these rapes also shared their mixed feelings of love and hate toward their children. I also met family members taking care of children whose mothers could not accept or raise them.

During the post-election violence in Kenya and in other countries where conflict-related sexual violence is common, humanitarian agencies and other groups work hard to help women get post-rape care under very difficult circumstances. But an essential element of comprehensive post-rape care, namely access to safe abortion for women who choose to end their pregnancies, often remains unattainable, leaving women and girls unable to make critical decisions about their health and their lives in the aftermath of sexual violence.

In January, the African Commission on Human and People’s Rights opened a continental campaign for the decriminalization of abortion in Africa – to focus attention on unsafe abortion, which significantly threatens women’s and girls’ sexual and reproductive health and rights. If governments are serious about the health needs of women and girls raped in conflict, they must include abortion in post-rape care and take steps to provide it to those who need it. The Kenyan government should review its restrictive laws on abortion to ensure that women and girls who become pregnant as a result of rape can get safe abortions.

There may also be some fresh hope for the women I interviewed, and perhaps for their children. Last year, President Uhuru Kenyatta promised to establish a reparations fund for victims. This should be established quickly and transparently and women should be involved in deciding how this money is spent. Funding should urgently be earmarked to meet the urgent healthcare needs of survivors and the needs of their children.

Not all women who become pregnant as a result of rape will choose to terminate their pregnancies, but all of them deserve to make that choice for themselves and have access to health care and support.