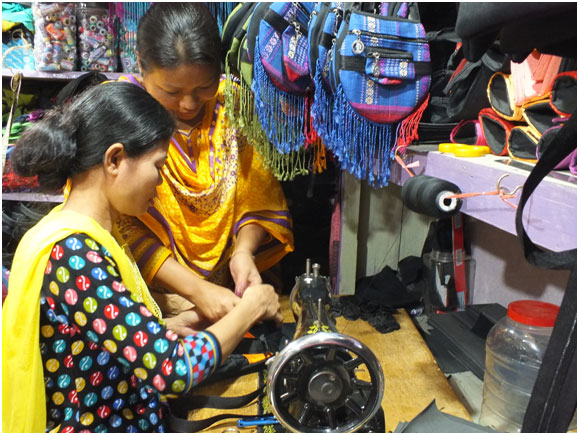 RANGAMATI, Bangladesh, Feb 12 2016 (IPS) - On a gloomy weather in a hilly suburb in Tarabonia, three women keep themselves busy stitching clothes. The informal shop-cum tailoring outlet is the only one of its kind in the neighbourhood and so the shop has a good record of sales of apparels. Minu Bai Marma, a 27 year-old housewife who runs the rented shop, gives a smile and attends to her regular customers. Customers keep ordering for new dresses, especially before festivals and Minu and her husband earn a fairly good amount of profits to run the family.

Seven years ago, Minu’s family life was not so happy. Minu and her husband, Athuse Marma, had to resort to heavy lifting work in cattle farms or plow arable hilly land. “We literally had no earnings. We had to work as day labourers to make living. It was like no work, no pay. That is how life was at that time,” said Minu who broke into tears. Minu lives in a suburb of Rangamati, one of the three hill districts (Chittagong Hill Districts, CHT) of Bangladesh located about 350 km south-east of the capital Dhaka where tribal people, who constitute the majority of the population, live off agriculture. People of the hill districts earn 40 per cent less than the average of US $1,300 in the rest of the country.

With a focus on tribal people, Young Power in Social Action (YPSA) has been implementing microfinance programmes aimed at economic development in the CHT. Minu became a member of YPSA in October 2009 and soon after she started with a loan of US$ 50 and repaid it in multiple installments by July 2010. Minu borrowed US $1,500, the highest single loan amount, in October 2015 after she repaid all the previous 7 loans. “With the loan I bought a sewing machine to stitch dresses. This was my dream and I soon gained expertise in dress-making,” said a visibly delighted Minu, adding, “My life has changed after I joined YPSA. Today I have a proper home. My children go to school. We eat proper meals. I am also saving money that I make from this small business.”

Poverty is now history for Minu. Like her, there are over 25,000 members of YPSA of 1,609 groups in the CHT who enjoy economic freedom. Mohamad Manzur Murshed Chowdhury, Director, Economic Development of YPSA told IPS News: “We invite only those who live in extreme poverty like day labourers, landless, farmers, small traders and physically challenged people, all of them show potential in utilizing loans.” Murshed, who showed this correspondent some beneficiaries of YPSA’s microfinance programmes in Kowkhali in Rangamati, said “We don’t just lend money but each group members undergo certain training and awareness programmes. During their participatory group meetings they learn about business opportunities and help one another.”

As of October 2015, YPSA distributed over US$ 37,000,000 collateral free loans that have transformed lives of very poor people who once had no power or voice in the society. Cheya Chakma, a 26 year-old housewife who runs a souvenir shop with her husband at the heart of Rangamati city also made a fortune from borrowing money from YPSA’s microfinance programme. She is a successful small entrepreneur who has no shame in concealing her destitute past. “I was broken and practically had to beg to survive but today I am proud to be empowered. I can decide what to do with my family and indeed plan our future,” said a smiling Cheya.

Bangladeshi women today are more aware of their rights than they were a decade ago. Microfinance has been a revolutionary tool in lending them a voice. Women’s empowerment – considered key to addressing poverty — has seen a major emphasis in the national development programmes. Hasib Hossain, founder and Executive Director of Proyas Manabik Unnayan Society which runs a weekly radio programme on presenting successful women whose capacity consistently increased in using borrowed money, said: “In a male-dominated conservative society women are always suppressed but policies in favour of women’s development have broken that stereotype. More women in rural areas today are engaging in businesses — a testimony of their freedom.”

Various surveys show that when equipped with the proper resources, women have the power to help their families and entire communities escape poverty. When women earn an income, they reinvest 90 per cent of it in their families while for every year a girl spends in school she raises her family income by up to 20 per cent. Educated girls grow into educated women, who in turn have healthier babies and are more likely to educate their children. Empowerment is the total sum of changes needed for a woman to realise her full human rights and potential.

Shireen Haq, one of the founders of Naripokkho, a leading organization fighting for women’s rights told IPS News, “Women with monetary incomes do appear to exercise more decision-making power than those whose work does not generate cash incomes, but this is not a major trend. On the other hand, women heads of households do have more decision making power by default.” adding that “microfinance programmes targeting women have, despite all limitations, expanded income earning opportunities for women and have provided many women with the means for their first economic ventures.”