Jul 4 2016 - Will a Duterte administration change the migration pattern of Filipinos searching for a level playing field and a better life?

IF career criminals are stopped dead on their tracks, literally or otherwise—not just petty thieves, drug lords instead of drug users, criminal coddlers as opposed to only small-time hoods, plunderers and not just frontline government bribe takers;

If taipans and magnates, foreigners and local lackeys are forced to respect Philippine laws, provide decent jobs instead of endos;

If Filipino workers and professionals are adequately paid, allowed to regain productivity at work instead of wasting billions in traffic—then, there is hope that the 6,000-plus leaving daily to find overseas opportunities will decrease.

From the time export of manpower was devised as a safety valve against unemployment and lack of opportunities at home which, in turn, were fumes fueling social upheaval during and after the Ferdinand Marcos years, Filipinos have moved in increasing numbers to foreign shores in search of a better quality of life for at least those who have a life to live.

To a significant number, those who have less in life and even less in law, migrating simply becomes a means to survive.

Which countries offer a better quality of life than what Filipinos have endured before and after martial law?

To a layperson, Numbeo provides an easy comparison. Of course, Numbeo statistics are user-generated (just like Waze, the digital traffic navigator is) but to most, the statistics become eye-openers.

For lack of formatting capability, the column titles of the accompanying table are described, so our readers can match the column with the matching numbers.

From the left, the first of 11 columns represents the Ranking, followed by the City, Qualify of Life, Purchasing Power, Safety, Health Care, and Cost of Living, Property-Price-to-Income Ratio, Traffic Commute, Pollution and Climate indices.

The quality of life is a prime consideration for Filipinos seeking permanent residency not just for themselves but, principally, for their children whom they would want to be spared from what appears to be an intractable trajectory to perpetual poverty. 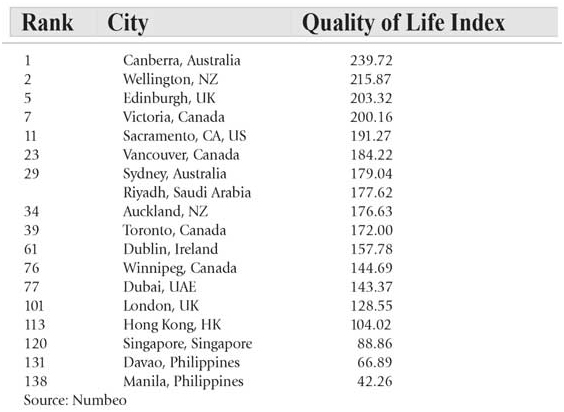 Where have Filipinos settled in search of better quality of life?
North America had been leading the favorite countries of choice for permanent residency. The five countries with permanent migration programs are Australia, Canada, New Zealand, the UK and the USA.

It could be argued that the “special ties” between the Philippines and the United States, firmly entrenched by the establishment of a government, laws and education patterned after the US of A, allowed the Philippine kite to fly as far and high as the colonial power allowed it to.

The tie was gradually loosened, especially after the 50 years of Hollywood had run roughshod over the 400 years under Spain; when English became the language of business and education; and rock and roll, then rap, unplugged the kundiman from the musical charts.

Because the US and the subsequent countries of migrant destinations are driven by national interests, migration laws opened and closed as the economic and political situations require.

Mass migration to the US in the 19th century was a result of an earlier exodus of Europeans, separatist Puritans fleeing religious persecution from the Church of England, the Pilgrims of Plymouth Rock from which the United States was built.

Filipinos, on the other hand, came to know the post-Puritan Americans as replacement masters for the Spanish conquistadores: admirals and generals who snatched the victory from the Katipunan and declared the country its launching pad for Westernization of Asia.

At the time, America had a boundless need for people to man the frontier, build the tracks, protect boundaries as they are created by expansionism, get more people to populate the United States using the new entrants like canaries in a mine allowing America to “safely” search and expropriate gold, minerals, and whatever the US needed to satisfy its expansionary quest.

As inhabitants of a US territory, the Filipinos were regarded as US nationals until the creation of the Philippine commonwealth. Filipinos then could legally go to the US without a need for visas. In fact, they were already in the US without the four seasons.

The Federal government, meantime, started to craft laws defining who could come to America. The teeming masses had to be winnowed: convicts and prostitutes were the first to be barred by the Act of Aug. 3, 1882, allowing the Secretary of the Treasury to establish a tax of 50 cents per immigrant.

1882 also witnessed the creation of the US quota based on national origin—the Chinese Exclusion Act (which prohibited the import of contractual foreign labor) repealed only in 1943.

To strengthen its foothold in its new Asian territory, the United States created the Commonwealth of the Philippines. From 1935 to 1946, this administrative body laid down the foundation for a Philippine Republic and its “independence.” It was during this period that scions of the Philippine elite were sent to the US as student pensionados, to learn the ABCs of USA governance.

After the grant of “independence” on July 4, 1946, Filipinos were only able to go to the US by obtaining the appropriate temporary and permanent resident visas. July 4 of every year is now celebrated as Filipino-American Friendship Day after Independence Day had been reinstated to June 12, a belated and begrudging admission that the Philippines had declared itself freed from the Spanish colonial masters.

With the arrival of information superhighway, Filipinos got caught in the web of migration, discovering other destinations from actual and digital testimonials of those who have set foot and taken residency in other shores.

Canada emerged as a viable and attractive destination, given its proximity to the United States. The Commonwealth states, including the former colonial power—United Kingdom of Great Britain—showed up in the migration horizon.

The Commission on Filipinos Overseas (CFO) Stock Estimate of Overseas Filipinos shows the number of kababayan (with temporary or permanent residency) in the leading countries of migration as of Dec. 2012: 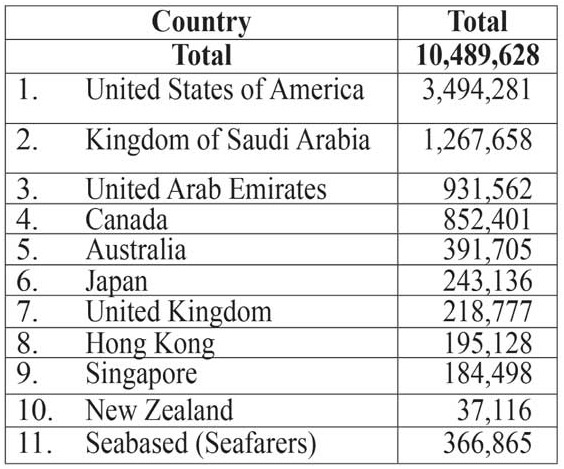 The tables show that while Australia is only the fifth country with the most number of Filipino permanent residents, Canberra and Sydney are on the top of cities with the best quality of life index.

On the other hand, despite having a low quality of life index (and the sorry state of human rights in the country), Saudi Arabia is second only to the United States as the top destination for Filipinos. It should be explained that those in the KSA are mostly overseas Filipino workers (OFWs), whose main reason for being there is the need for employment and better wages.

The same is true with the rest of five of the 10 country-destinations: United Arab Emirates, Japan, Hong Kong, Singapore, which all host mostly OFWs. In fact, OFWs in Saudi Arabia could be permanent temporary workers in the Middle East without the ability to obtain lawful permanent residency and citizenship pathways.

Vancouver and Toronto, despite being 23rd and 39th in the Quality of Life Index, are home to a significant number of Filipinos in Canada—which, in turn, is second only to the US in terms of the numbers of lawful permanent residents.

Oh, Davao beats Manila as the better city to live in if quality of life is to be the basis for migration.

In fact, migration to Davao has started, with the daily procession of government officials (turncoats mostly) and the business community seeking audience with and blessing of President Rody Duterte—magnates, taipans and lackeys of foreigners owning public utility companies in the Philippines despite Constitutional ban.

The Duterte administration could then be good for domestic migration, but bad for airlines that would be losing Filipino passengers bound for work or permanent residency destinations.

Amazing, indeed, how migration could be measured by a ruler’s political will.

This story was originally published by The Manila Times, Philippines