Is Kemalism on Its Way out in Turkey?

Jul 21 2016 - The enigmatic coup-attempt in Turkey on the night of July 15 and 16 signals something ominous about the future of Turkey, NATO, and the entire region. There’s more to read into the event than what appears on the surface. We don’t know much about the nature of the coup, but it has definitely tarnished the “Turkish Model” of success, which its Arab neighbours envied, and European ones admired for the co-existence of liberal Islam, secularism, and democracy. The “abortive coup” seems to have further consolidated Erdogan’s power, at least for the time being. Seemingly, Erdogan and his followers are marching together toward “illiberal democracy”, if not toward the utopia of Islamist totalitarianism. 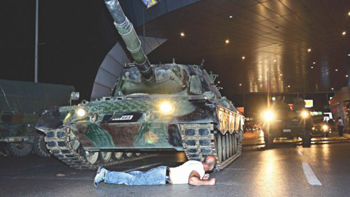 A man lies in front of a Turkish army tank at Ataturk airport in Istanbul. PHOTO: AP

Kemalism turned Turkey too secular too soon to sustain for generations. Thus, the resurgence of political Islam in Turkey indicates the country is preparing itself for a departure from Kemalism. One’s not sure as to how this seesaw is going to affect Turkish society and politics in the future. I think the following are Turkey’s nemeses, which we need to understand as to what might happen to the country now: Kemalism; the Kurdish problem; Turkey’s neighbours; and Turkey’s relationship with America.

Turkey is very unique from its European and Muslim neighbours. Being straddled on two continents, this Muslim-majority country is officially secular in the strictest sense. It’s not just another postcolonial country in the Muslim World, it’s rather a former colonial power, the centre of the mighty Ottoman Empire, which once ruled parts of Eastern Europe, West Asia, and North Africa for several centuries up to the end of World War I. Turkey’s Ottoman legacy of ruthless subjugation of European nations – including forcible conversions of Christians into Muslims, and the infamous Armenian Genocide – is still a factor behind its exclusion from the EU by European nations.

Turkey isn’t a nation state. Fifteen million of its 80 million people are ethnically and linguistically non-Turkish Kurdish Muslims, in the process of being fully integrated into the main stream of population. Turkey has a checkered history of military rule and democracy; and many Turks aren’t sure if they are primarily Asian, Muslim, or European.

Now, to look at the enigmatic “abortive coup”, one may agree with an analyst that: “Erdogan is using this failed coup to get rid of the last vestiges of secular Turkey.” Some people question the coup and whether it was staged to further consolidate his power, and to turn Turkey into an Islamist autocracy. The amateurish and excessive brutal behaviour of the soldiers on the street, who didn’t even close down all electronic media outlets, including cell phones, and TV stations, raises questions among people whether it was really a coup-attempt, or a false flag operation!

Interestingly, while Erdogan blames his former ally and present adversary, Hanafi Sufi Master Fethullah Gulen – self-exiled in the US – for the “coup-attempt”, Gulen points fingers at the President for staging the whole thing for further consolidation of power. To Erdogan, Gulen is corrupt and a terrorist, although there’s no Turkish court decision to charge Gulen with any terrorist activity. The day after 9/11 attacks, he wrote an article in the Washington Post and stated: “A Muslim cannot be a terrorist, nor can a terrorist be a true Muslim.” Contrary to Erdogan’s allegations, Gulen believes in interfaith dialogue, multi-party democracy, and asserts: “Studying physics, mathematics, and chemistry is worshipping God”.

The end of the Ottoman Empire in 1922 and the Kemalist Revolution of 1923 transformed Turkey into a modern, ultra-secular country, where the military and urban classes became the main custodians of secular democracy. With the end of the Cold War and the acceleration of the globalisation process, and the IT Revolution in early1990s, Muslims across the world became more Islamised than before. Henceforth, Turkish Muslims started questioning the utility of Kemalist “Godless” secularism. Erdogan became one of the bold advocates of political Islam. He is not only an Islamist but also an admirer of “authoritarian democracy” – a euphemism for dictatorship, a la “Mahathirism” in Malaysia.

As Erdogan’s support for Islamist rebels in Syria has contributed to the instability in Turkey and, so is his tacit support for the ISIS in Iraq and Syria. Turkey is accused of having bought cheap oil from the ISIS controlled Iraqi oilfields, and it didn’t stop foreign nationals at its border from entering ISIS-occupied territories in Syria to join the terror outfit, till the recent past. Why so? One assumes to topple the pro-Iranian Assad regime, and to stop secular nationalist Syrian Kurds from gaining any foothold in Syria.

The Kurds are in Turkey by default since 1919. The League of Nations arbitrarily divided Kurdistan into four parts, giving each to Turkey, Iraq, Syria, and Iran. Up to 2009, Kurds in Turkey couldn’t publicly speak their language or sing any Kurdish song. Turkey didn’t even recognise them as Kurds, but as “Mountain Turks”. After the US-led Iraq invasion of 2003, Iraqi Kurdistan has become an autonomous entity. The Turkish government is very uncomfortable with this development.

Erdogan tried his best to make Turkey a EU member. The EU has been unwilling to accept Turkey as a member so far. European and North American NATO members have had no problem in having Turkey as a member of this military alliance. However, as The New York Times has pointed out [“The Countercoup in Turkey”, July 18, 2016]: Erdogan’s use of Islamist language and harsh retaliatory measures against his secular opponents might “compromise Turkey’s democracy and its ability to be a stabilising influence in NATO and the region”.

In view of Erdogan’s position vis-à-vis the democratic and secular values of the EU and the West, it’s strange that till the other day Turkey was insisting its main strategic relationships remained with the NATO and the EU, and that it had “zero-problem” with European neighbours. But now it seems like Erdogan and his party may be laying the ground for the creation of a Muslim bloc. Both the EU and US seem to have emerged as the biggest nemeses for Turkey.

To conclude, one is least likely to be enamoured by Erdogan’s authoritarian Islamism; his attitude towards the Kurds; mass arrests of journalists, opposition supporters, and alleged coup makers; his promotion of Islamist rebels in Syria; and last but not least, his alleged links with the ISIS at least in the earlier stages. However, one can’t solely blame Turkey or Erdogan for the drift in Turkey’s domestic and foreign policies, which are deviations from Kemalist principles of secular democracy. Western obduracy, racism, and Islamophobia are also responsible for the messy situation in Turkey. This doesn’t bode well for regional and global security in the long run.

The writer teaches security studies at Austin Peay State University in the US. He is the author of several books, including his latest, Global Jihad and America: The Hundred-Year War Beyond Iraq and Afghanistan (Sage, 2014). Email: tajhashmi@gmail.com