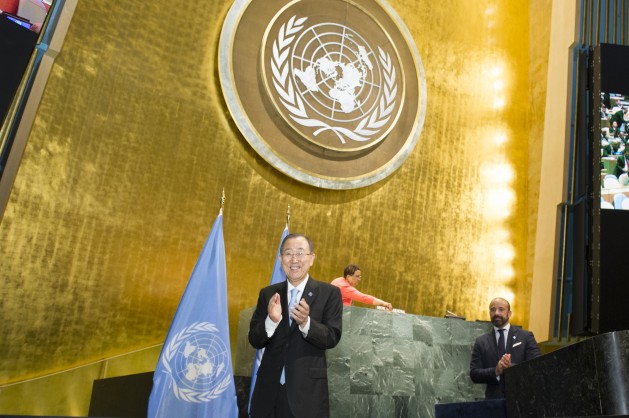 UNITED NATIONS, Sep 22 2016 (IPS) - The Paris Climate Agreement is on the verge of coming into force after 31 nations officially deposited their instruments of ratification here Wednesday, more than doubling the number of countries which have joined so far to reach 60.

Convened by Secretary General Ban Ki-moon, the High Level Event on Entry into Force of the Paris Agreement on Climate Change brought world leaders together to act upon commitments made to reduce global greenhouse emissions last year.

“What once seemed impossible now seems inevitable. When this year ends, I hope we can all look back with pride knowing that we seized the opportunity to protect our common home,” said Ban to delegates.

Director of Strategy and Policy at the Union of Concerned Scientists (UCS) Alden Meyer pointed out the significance of the event to IPS, stating: “Political leaders see this as an important issue for their public.”

Similarly, Greenpeace International’s Climate and Energy Policy Advisor Kaisa Kosonen said how “inspiring” it was to see so many countries ratifying the agreement so soon.

“It truly tells you that times have changed. If one compares the process we had at Copenhagen and you think about where we are today when the agreement is looking likely to enter into force…it is giving the agreement a very good start,” she told IPS.

“Getting an agreement on climate change was one of the most difficult tasks the world has ever faced" -- Nick Nuttall, UNFCCC.

During the UN Climate Change Conference in 2009 (COP15) in Denmark, global leaders failed to commit to concrete actions to reduce emissions. The Paris Agreement now obligates governments to keep temperature rise below 2 degrees Celsius above pre-industrial levels and to pursue efforts to limit the temperature increase even further to 1.5 degrees Celsius.

Many believe that the treaty will be ratified by the end of the year, less than a year since the agreement was signed, which would make it the speediest agreement to enter into force.

“It’s unprecedented,” said Spokesperson for the UN Framework Convention on Climate Change (UNFCCC) Nick Nuttall to IPS after noting the breakneck speed in which the treaty would come into force.

“Getting an agreement on climate change was one of the most difficult tasks the world has ever faced…that’s a strong political signal that all governments are on board to actually make good on their pledges in Paris.”

Of the countries that have joined are some of the biggest emitters of greenhouse gas emissions including China and the United States, which together account for over one third of global emissions.

However many of the countries which joined the agreement early, were small island states many of which see climate change as an existential threat. Although these states face increased natural disasters and rising sea levels, their own carbon emissions barely make a dent on a global scale.

Meyer commented on the importance of the move by the U.S., stating: “The United States is very wealthy but is obviously not immune as we’ve seen from Superstorm Sandy, the recent flooding in Louisiana, the droughts and heat waves in the West…no country, no community is immune.”

More countries are expected to ratify the agreement by the end of this year including Australia, Canada and the 28 members of the European Union (EU).

If these promises are fulfilled, the agreement will pass the second threshold and go into effect within 30 days.

But this is just the beginning, Nuttall stated. “The Paris Agreement is a framework agreement to combat climate change but it needs some nuts and bolts put in.”

Meyer echoed similar sentiments, telling IPS: “Having the agreement in place is only meaningful if countries implement [the agreement]. It is really actions on the ground that make a difference and the jury is still out on that.”

Nuttall highlighted the need for a “rule book” for member states to put the climate treaty into action, which many hope will be achieved during the upcoming Climate Conference (COP22) in Morocco.

Meyer particularly pointed to the challenge of achieving the two degree Celsius goal, telling IPS that the pledges by themselves do not add up to meet the temperature target. But even if the international community achieves this goal, the impacts of climate change will drastically increase which will require further action.

“The other side of this discussion has to be how we increase resilience to climate impacts and how we help countries and communities that are facing impacts cope with those impacts,” Meyer told IPS.

“This is a moment which we should celebrate, hoist a glass of champagne but get back to work in the morning because there’s still a lot of work to do,” he continued.

Already obstacles are arising as trade policies continue to clash with climate action.

“It’s clear that all policies that still favor fossil fuels or prevent countries from prioritizing renewable clean energy are harmful and should not be supported,” Kosonen said, referring to a new controversial global trade deal Trade in Services Agreement (Tisa).

According to leaked documents, the trade deal under negotiation between the EU and 22 countries may threaten the expansion of clean, renewable energy which could undermine the achievement of the Paris Agreement.

Meyer told IPS it was important for heads of State to engage and ensure that trade deals are “climate compatible.”

However, the world is waiting for the final ratification of the Paris Agreement as it is still uncertain where, how far and how fast it will go.

“The direction is clear, the commitment is clear but…can a family of nations working with the private sector and being supported by cities and regions rev up the action sufficiently quickly that we have a good chance of peaking these emissions very soon? That we will have to wait and see,” Nuttall stated.

Kosonen noted there is no room for complacency.

“Time is not on our side on this. This is the moment when we come together and decide this is what we want to do,” she concluded.

In December 2015, the international community descended on the French Capital of Paris to sign an agreement to reduce global warming. Over 180 countries have signed the agreement.