Jomo Kwame Sundaram was United Nations Assistant Secretary-General for Economic Development, and received the Wassily Leontief Prize for Advancing the Frontiers of Economic Thought in 20 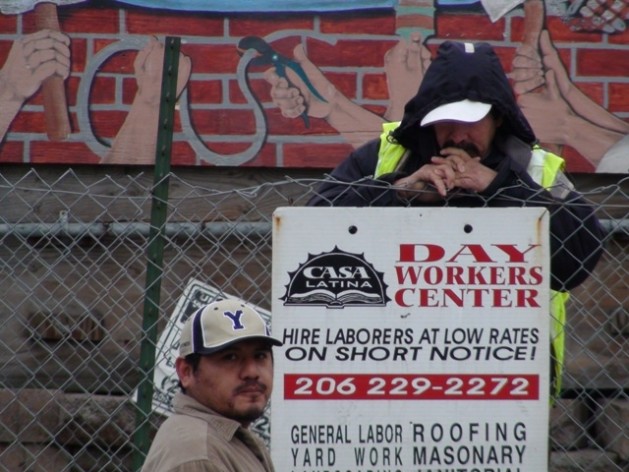 Waiting for work at the Day Workers Center in Seattle, Washington. The new Trump administration promises ‘tough and fair agreements’ on trade, to revive the US economy and create millions of jobs. Credit: IPS

KUALA LUMPUR, Jan 26 2017 (IPS) - New American President Donald Trump has long insisted that the United States has been suffering from poor trade deals made by his predecessors. Renegotiating or withdrawing from these deals will be top priority for his administration which views trade policy as key to US economic revival under Trump. What will that mean?

The new administration promises ‘tough and fair agreements’ on trade, ostensibly to revive the US economy and to create millions of mainly manufacturing jobs. The POTUS is committed to renegotiating the North American Free Trade Agreement (NAFTA), signed in 1994 by the United States, Canada and Mexico. And if NAFTA partners refuse what the White House deems to be a ‘fair’ renegotiated agreement, “the President will give notice of the United States’ intent to withdraw from NAFTA”.

Constraints?
Presidential fiat may well be extended in radically new ways by the incoming president with, or perhaps even without the support of a Republican-controlled Senate and Congress. However, in terms of trade, Trump may be constrained by his own party’s ‘free trade’ preferences, while the minority Democratic Party is likely to remain generally hostile to him.

Many informed observers doubt the ability of the US President to unilaterally impose trade policies, as the POTUS is subject to many checks and balances, conditions and constraints. But a widely held contrary view is that existing legislation allows the president considerable leeway. But as such ambiguity can be interpreted to grant the president broad authority over trade policy, Trump is likely to use this to the fullest.

Worryingly, Trump and his appointees often appear to see trade as a zero -sum game, implying that the only way for the US to secure its interests would be at the expense of its trading partners. Their rhetoric also implies that the most powerful country in the world has previously negotiated trade deals to its own disadvantage – a view almost no one else agrees with.

Thus, Trump’s belligerent rhetoric threatens trade wars or acquiescence to the US as the only means to change the status quo. But future deals even more favourable to the US can only be achieved with weaker partners, e.g., through bilateral treaties, or those with ulterior motives for accepting even less favourable terms and conditions.

Unequal effects
Of course, the real world is more complicated than one of competing national interests. For example, while US corporations and consumers may benefit from relocating production abroad, American workers who lose their jobs or experience poorer working conditions will be unhappy. Clearly, there is no singular national interest.

Trump’s rhetoric so far implies an opposition of American workers to the ‘globalist’ US elite with scant mention of consumer interests, the main source of support for the globalists. The unequal effects of freer trade have long been recognized by international trade economists except globalization cheerleaders who insist that freer trade lifts all boats – a myth belied by the experiences of increasing numbers of American workers and others in recent decades.

Meanwhile, US protectionists have been in denial about labour-displacing automation throughout the economy. They also fail to recognize how ‘laissez faire’ American capitalism has let the devil take the growing ranks of the hindmost. In contrast, ‘managed’ capitalism has often ensured less disruptive and painful transitions due to trade liberalization and automation, e.g., through government retraining schemes.

Trade rules biased
Nevertheless, it remains unclear how the Trump administration’s trade strategy will unfold. While trading system rules are skewed to favour the powerful, US relations with trading partners have sometimes become dysfunctional and perhaps less advantageous. Hence, a more aggressive Trump administration may well secure better deals for US interests. Some options favouring US companies would only involve minor disruptions, while others could disrupt the US as well as the world economy, possibly precipitating another global recession.

Besides renegotiating or rejecting bilateral and plurilateral deals, the US could also bring more cases before the World Trade Organization (WTO). After all, the US and Europe wrote most WTO rules after the Second World War, and the US has almost never revised its trade rules and practices, even after losing cases. The US has long used the WTO dispute settlement mechanism to great effect until it began disrupting its functioning recently after losing a case.

Trump has long threatened targeted duties to ensure compliance and more favourable deals. While trade lawyers debate the scope for and legality of such actions, most trade economists have argued that US consumers will pay much higher prices to save relatively few jobs.

Triggering trade war
However, instead of imposing duties on specific products, as allowed for by WTO rules, emergency authority may be invoked to impose broad-based tariffs on exports from specific countries, as Trump has threatened to do.

Such an escalation risks causing significant economic damage all round, especially if it provokes retaliatory actions, with no guarantee of securing a more favourable deal. A relatively minor trade dispute can thus easily spin out of control to become a very disruptive global trade war.

After Trump’s inauguration, the White House announced US withdrawal from the Trans-Pacific Partnership (TPP) trade deal, effectively killing the agreement. Ironically, the Obama administration had claimed the TPP would enable the US to write economic rules for the region instead of China, Trump’s favourite bogey. Thus, even presidential one-upmanship can trigger the new world trade war.

Bullying as global trade strategy?
In yet another irony, in Davos last week, a Goldman Sachs veteran announced the sale of a majority stake in his multibillion dollar business to a Chinese group before joining the Trump administration as senior trade adviser. Perhaps as a foretaste of what to expect, in response to Chinese President Xi’s reminder that “No one will emerge as a winner in a trade war”, he warned that China stands to lose ‘way more’ than the US if it retaliates when the new administration imposes selective tariffs on its exports.