Make Way for Bamboo, the Plant for the Future

Feb 5 2017 - Bamboo with its graceful form has been an inspiration to artists and poets in many eastern countries. It is considered to bring good luck and prosperity to those who live near it. This is, in fact, a reality as bamboo is now established as an eco- friendly crop with high socio-economic returns. 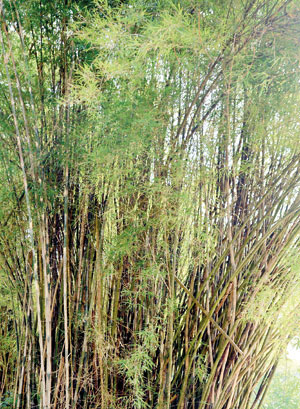 Forest cover in Sri Lanka decreased from 84% of the land in 1886 to 23% in 1992. In a predominantly agricultural country like Sri Lanka, there is a strong link between population growth and deforestation. Agricultural production, in the past, especially until the Green Revolution, has been mainly by increasing the area under production putting pressure on forests. In addition to the demand for food, demand for many wood based products is also increasing.

Other main factors that contributed to loss of forest cover are large-scale agricultural and human settlement projects, excessive harvesting of trees and corruption.

Timber is a limited and valuable commodity. According to the Sri Lanka Forestry Sector Master Plan (1995), annual sawn-wood consumption per 1000 persons in 1993 was estimated to be 31 cubic metres. Demand for plywood and other wood-based panels is predicted to increase at rates of 2.8% and 3.5% respectively per year. To counter the increasing shortage, sawn-wood is now imported. Reforestation is also carried out but the annual rate of deforestation during 1956 – 1992 was more than 40,000 ha while average annual replanting during the same period was only about 2,000 ha.

Forest loss has a devastating effect on biodiversity and forest dependent communities. Soil erosion and loss of water especially in catchment areas are now evident. Forests are a vast carbon sink and anthropogenic release of heat trapping carbon dioxide to the atmosphere is another major consequence of forest loss.

Solving the problem of forest loss is a prerequisite to any effective response to climate change. Sri Lanka being a UN REDD+ (United Nations collaborative initiative on Reducing Emissions from Deforestation and Forest Degradation) signatory is committed to reducing emissions. Bamboo could play an important role under the NRIFAP (National REDD+ Investment Framework and Action Plan)to mitigate emissions. A glaring omission in the measures and policies in its implementation is the non-inclusion of bamboo even though it has multiple benefits in mitigating emissions directly and indirectly – as a carbon sink, timber substitute, its role in forest protection and many other environmental benefits.

Bamboo belongs to the family of grasses. Unlike other grasses the culms are woody. The underground rhizomes bearing adventitious roots bind soil particles together and control soil erosion enhancing soil-build up helping reclamation of degraded land. The roots are shallow and bamboo does not tap deep water. In fact the rhizomes store water for tiding over dry conditions. Bamboo is fast growing and can be harvested after 4 to 6 years of planting. Harvesting can be done sustainably over many years as new culms regenerate from the rhizome annually. A timber tree which takes as many as 20 to 60 years to grow is harvested only once in its life time.

Bamboo grows in a variety of habitats. Sri Lanka is among the countries where bamboo grows naturally though it has only small scattered areas under natural bamboo cover. The endemic bamboos of the island are the small diametre bamboos or reeds commonly called “bata”. However, many new species have been introduced.

China is the world’s leader in bamboo processing and utilization and leads bamboo export markets, accounting for over 60% of trade. India has also declared the bamboo sector as a priority sector for development for its capacity to promote the four concerns namely Economic development, Environmental sustainability, Equity and Employment termed the four ‘E’s. Recently the TATA Trust as entered into an agreement with the Government to set up a Bamboo Research Development Centre in Maharashtra which will be also used to impart skill and training to the rural and tribal people in the region.

It is a well-known fact that bamboo helped in the economic development of some of the world’s poorest countries in Latin America, Africa and Asia. Harnessing this resource for the benefit of the nation should be our goal. We have the benefit of being amongst those countries where bamboo grows naturally. Bamboo can grow in impoverished soils and rehabilitate it. We have sufficient land for cultivating this crop. It can be grown along riverbanks forming a live wall protecting the riverbank. Abandoned plantations, forest fringes, land degraded by soil erosion or sand mining are some areas where bamboo can be grown, leaving arable land for growing agricultural and plantation crops. Large extents of tea land are abandoned due to soil erosion and bamboo should be an ideal crop there.

It is necessary to plant bamboo to start new ventures. Identification of suitable species and raising healthy planting material is a requirement. Large-scale bamboo plantlet production is possible by tissue culture techniques and this technique is available in the country while it is a much sought after technique elsewhere. Tissue culture techniques along with conventional methods could be applied to raise required planting material.

The Mahaweli Authority has claimed that over one million bamboo plantlets have been produced using tissue culture technology and planted in many parts of the country. But information on their survival and performance in the different ecological zones is not available. I have seen massive clumps of bamboo planted by the Mahaweli Authority over ten years ago and it is indeed a sorry sight to see the dried up bamboo poles going waste. These could be utilized for suitable purposes. In fact, revival of new growth in clumps requires regular harvesting of older culms.

The extent of the present bamboo resource has to be determined. At least the extent of utilization may be determined by surveying the number of permits issued for harvest and transport. Although the Forest Department had carried out a survey of permits issued between 1989 to 1990, the present extent of utilization is not known.The strict legislation imposed on harvesting and transport of bamboo in 1992 by the Forest Department was based on the limited extent of availability and use at that time. Presently the traditional utilization of large bamboo is less due to use of metal scaffolds in the construction sector and bamboo handicrafts are rapidly being replaced by cheaper plastic ware.

Legislation on bamboo protection needs to be reviewed by the Forest Department and adapted as the present situation demands. Farmers are not aware of sustainable harvesting where only the old culms should be removed and the outer younger culms left to retain the vigour of the clump.Sustainable management practices have to be enforced and licence to harvest issued based only on such practices.Furthermore, investors are reluctant to start large plantations as they are not sure of getting permits for harvest and transport. Such provision should be an encouragement and indication of State support to those who are keen on starting bamboo based ventures.

There has to be a definite national plan and serious commitment to get a viable bamboo industry moving. Tea plantation companies with large tracts of unproductive tea but good infrastructure and other resources should seriously consider bamboo as a priority in their future diversification efforts. The need for long duration soil rehabilitation is critical for continuance of the tea industry, and bamboo could well be the rehabilitation crop!

(The writer, formerly a Senior Scientist at the Institute of Fundamental Studies is a consultant and specialist in bamboo and plant tissue culture)

This story was originally published
by The Sunday Times, Sri Lanka

The many uses
Bamboo has been utilised traditionally in construction of houses and as a handicraft material. It has been the main livelihood for the rural people living near bamboo habitats. This craft has a long history but is on the decline for many reasons and needs to be revived.

A mature bamboo culm has flexible wood with a density comparable to that of high value timber. Its straightness, lightness, strength, hardness, and easy workability, are ideal for a variety of technological purposes. During the Second World War, “plybamboo” was produced in China for aircraft material.

Since then technological improvements have resulted in the development of various types of processed bamboo products that last long and are strong enough to be substituted for timber.

Bamboo mats which are prepared by weaving culm strips are glued together to produce bamboo mat boards. Bamboo veneers are peeled by machine from large culms about 3-4 m long that have been pretreated in boiling water. Bamboo sheets are also produced by breaking and widening the large culms after hot-water treatment and glued together to form boards in the same way as plywood. Bamboo boards can be used in making furniture, floors, walls, doors, ceilings, etc. Particle boards are manufactured from bamboo chips. Processed bamboo products are increasingly in demand as the trend in most developed countries is the use of natural rather than synthetic products.

Even entire houses can be constructed using processed bamboo. Low cost bamboo houses as well as costly innovative buildings designed by renowned architects such as Simon Valez are much in much demand. Houses that are light and strong and are able to withstand earthquakes are also constructed in earthquake prone areas.

Bamboo is used in many ways. Its earliest use on an industrial scale is in the manufacture of paper pulp which is still carried out in India and China mostly. Species with long fibre and higher cellulose to lignin content are suitable for this purpose and also for use in making rayon.

Bamboo supplies 10% of the world’s paper pulp. The cost per metric ton of paper is over US$ 700/. It can be estimated that a plantation of giant bamboo (Dendrocalamusgiganteus) with 200 bamboo clumps per hectare can give an annual yield of about 2000 poles with a biomass of as much as 50 metric tons of bamboo for manufacture of paper pulp. Fifty metric tons of bamboo can yield 20 metric tons of paper pulp which at a cost of US $ 700/ give a potential income of US $ 14000/ per hectare per year.The sale of poles alone at the rate of SLR.200/ per pole could give a potential income of SLR 400,000/ per hectare. Thus farming bamboo will be an income generator contributing to alleviation of poverty.

Bamboo shoots are a nutritious vegetable. Export of canned bamboo shoots is a thriving industry in Indonesia and Thailand. Species suitable for edible shoot production (Dendrocalaumusasper, D. latiflorus) are grown on plantation scale. Such plantations provide both edible shoots and mature poles for construction and generate an income of over US $ 50 million per year.

Bamboo charcoal and activated carbon are also in high demand. Manufacture of bamboo charcoal is a cottage industry in some parts of Africa.

These are only some of the ways in which bamboo is utilized and shows its enormous potential. Its cultivation and utilisation can give rise to livelihood development and productive employment leading to eradication of extreme poverty. A variety of new export commodities can be produced and help in the economic development of the country.