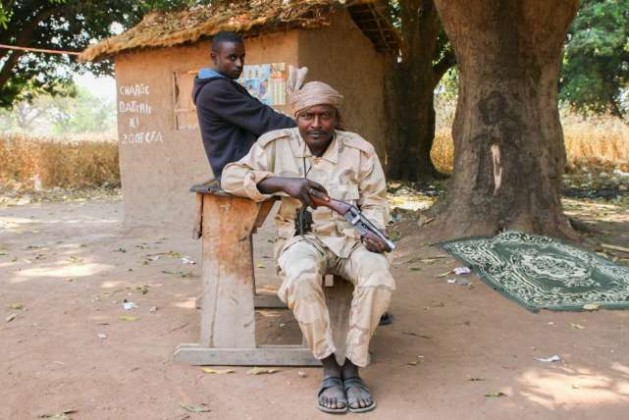 Seleka MPC fighters at a roadblock in Bojomo, Ouham province, with a desk they removed from the local school. © 2017 Edouard Dropsy for Human Rights Watch

Mar 23 2017 - Soldiers camping out in schools and breaking up desks for firewood is common in parts of the Central African Republic.  According to a United Nations report from November, 20 percent of the country’s schools are not operational, many because of misuse by armed groups. Some students were forced out of school four years ago, when the mainly Muslim Seleka rebels cut a bloody swath through the country and seized the capital. Thousands more children stopped going to school in the ensuing years, as Christian-animist anti-balaka fighters ousted the Seleka, torching whole Muslim communities and displacing more than 860,000 people. Many of these children may never resume their studies, despite hopes kindled when a new government took over a year ago. Researcher Lewis Mudge talks to Amy Braunschweiger about his latest research and what a lost generation could mean for the future of one of the world’s poorest countries.

What did you find through your research about the state of the country’s schools?

We found armed groups living at schools and right next to schools. In some cases fighters are just meters away, and for all intents and purposes, occupying it. And in two cases, UN peacekeepers were in schools. We did much of our research in in Central African Republic, where it’s mostly the Seleka occupying towns and looting and occupying schools. But anti-balaka fighters and other groups have repeatedly done so as well. 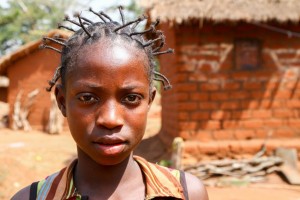 Their very presence was keeping students away from the school. Kids can’t study when soldiers are sleeping there. Students and their parents were afraid there could be fighting by the school, or that fighters would assault students on their way to class.

When I asked the fighters why they were in the schools, or why they may occupy them again, they’d say because the schools have good concrete floors, metal roofs, and they’re the best buildings in town.

Seleka groups left the schools in bad shape. Both the Seleka and anti-balaka would burn desks and chairs as firewood to cook. Now, there’s no place for students to sit. This doesn’t sound like a big deal, but it is. These schools can have up to 150 kids in one room, and they need to write on something. The groups burn textbooks. These are rural schools, and a textbook is really valuable. In a crisis, communities store books in the school to safeguard them, and the fighters would destroy them.

And you found UN peacekeepers in schools?

We found two schools occupied by UN troops. They had set up their camps and tents under the blackboard. It was surprising, because the UN put out a directive saying don’t occupy schools. So our findings demonstrated a disconnect between orders given in the capital and troops in the field. When I asked them why they were in the schools, it was the same as the Seleka: “It’s a good building.” The good news is that, when we reported it to the UN, they acted immediately. UN command was very shocked and not happy. The forces quickly vacated both schools.

What kind of stories did you hear from the people you interviewed?

We talked with a lot of school-age kids. I asked each one what they wanted to be and why school is important. They’re all farming now, and none of them want to be farmers. They want to be teachers or doctors or engineers. That was quite startling. There’s almost this sense of acceptance that they aren’t going back to school, that they can’t make up this time. They’d lost 2 or 3 years, and this is it. Their thoughts were, I’m going to be a farmer now. The one chance I had for myself and my family is gone now.

I met a dad who said school taught him how to read and do math and that allowed him to start a little business. He spoke French – the language business is conducted in there. Along with farming, he has a shop in the village, selling soap, oil, salt, pens, and other goods. And he thinks it’s a shame his kids won’t have that. Because his kids won’t have schooling, he worries they may not have enough money to send his grandkids to school.

The ability to read, write and do math makes a huge difference. Schools also give kids a basic level of French. The center of in Central African Republic literally has no state services. There’s a hospital in main towns, but that’s it, and if you can get there good for you, if you can’t then you are on your own. They’re some of the most vulnerable people in the world. The ability to get some education would be a huge step up.

Were there schools that were open but students couldn’t attend?

Yes, and those were the students who seemed the most affected. They stopped going to school because of fighters who harassed or threatened students. One woman said she was sending her two kids to school past fighters who had killed her husband, and that traumatized her. Understandably.

We were at a school with fighters right next to it, and they’d fire their guns into the air all the time, just to test them. The students said it was terrifying. The village had been attacked and taken over, and they associated the shooting with the fighting. It’s 9 a.m., they’re trying to study, and a fighter a few yards away is pulling off a few rounds on his Kalashnikov. “When that happens, we all just dive to the floor,” they said. It must be very, very difficult to concentrate on school.

Did you speak with any teachers?

There was a teacher in the southwest, at a school previously occupied by anti-balaka. Last year a fighter stabbed this teacher in the head when he tried to stop the fighter from burning a school desk. There were 300 anti-balaka fighters occupying the school then, and I asked why he tried to stop the fighter. The teacher said it was one of the last desks. And he’d had enough. He wanted some vestige of the school left to be able to restart it. I was stuck by his courage. He laughed, acknowledging it wasn’t the smartest thing. He showed me his scars. The soldier’s commanders apologized to the teacher, which surprised me. They probably realized the fighter – who was never punished – went too far.

You had to meet with the Seleka for this report. What was that like?

We’ve been talking to them for years. And it’s the same-old excuses to justify their presence. First, they deny it. And then you say, yes you are there in the schools, I’ve seen it. Then, they insist they’re there to protect communities from another armed group.

What they’re doing is working to control roads to profit from trade, whether it’s illicit minerals, or normal buying and selling. You see it openly. In one town there’s one road, the road where the school is. And the Seleka have the roadblock there. So as they’re saying there’re here to protect people, you can literally watch a shakedown, with fighters holding up a guy on a motorcycle at gunpoint and taking his money.

Did you feel unsafe doing this research?

Yes. Central African Republic is one of the most dangerous countries for NGO workers. And there’s this inherent risk when you’re in an armed group’s territory and researching what they’re doing. Coupled with the fact that they’re unprofessional fighters, to say the least. There are a lot of kids in the ranks. That adds a layer and dimension to risk analysis.

But on the other hand, we know these groups well. We always operate openly in the sense that we let them know we’re there.

The main risks are on the roads. We are very, very aware of where we’re going and what group is in control. And we’re always in touch with group leaders. We spend a lot of time in the bush, calling leaders, telling them where we are. That way, if we get stopped by some men from a certain group, we can say, “Your guy knows we’re here. We can call him now.” You have to know the state of the roads – we couldn’t do this research in the rainy season.

We also plan a lot before the trip, develop protocols and have daily check-ins to stay safe.

You’ve worked a lot in Central African Republic. How did researching schools stack up against the rest?

In terms of human rights abuses, there’s a difference between committing a massacre and occupying a school. A massacre is worse. But if there’s ever going to be a real peace or stability, it’s critical to get schools running. With tens of thousands of kids out of school, it makes you concerned about the future of the country. Even if the education system is poor. By now, we’re almost looking at a lost generation in certain parts of the country. I worry about how that might affect the future prospects for peace. Unemployment is everywhere. It’s very cheap to get guns. You can see how easy it is for armed groups to recruit people when schools aren’t operating.

But if parents can send their kids to school, their children may have some prospects.