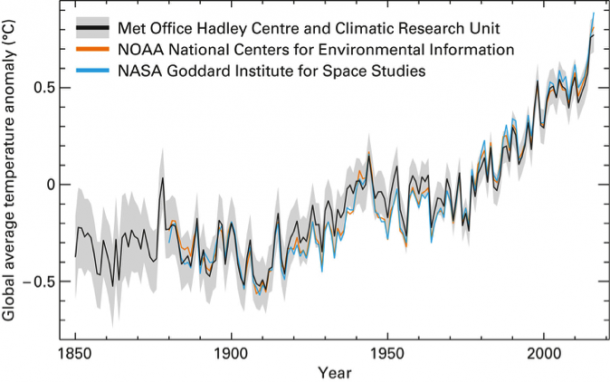 ROME, Mar 22 2017 (IPS) - Climate has, once more, broken all records, with the year 2016 making history-highest-ever global temperature, exceptionally low sea ice, unabated sea level rise and ocean heat. And what is even worse– extreme and unusual trends continue in 2017.

“This increase in global temperature is consistent with other changes occurring in the climate system,” said WMO secretary-general Petteri Taalas. “Globally averaged sea surface temperatures were also the warmest on record, global sea levels continued to rise, and Arctic sea-ice extent was well below average for most of the year.”

With levels of carbon dioxide in the atmosphere consistently breaking new records, the influence of human activities on the climate system has become more and more evident, said Taalas.

“The increased power of computing tools and the availability of long term climate data have made it possible today, through attribution studies, to demonstrate clearly the existence of links between man-made climate change and many cases of high impact extreme events in particular heat-waves.”

Each of the 16 years since 2001 has been at least 0.4 °C above the long-term average for the 1961-1990 base period, used by WMO as a reference for climate change monitoring. Global temperatures continue to be consistent with a warming trend of 0.1 °C to 0.2 °C per decade, according to the WMO’s report.

“The very warm ocean temperatures contributed to significant coral bleaching and mortality was reported in many tropical waters, with important impacts on marine food chains, ecosystems and fisheries.”

Carbon dioxide levels in the atmosphere reached the symbolic benchmark of 400 parts per millions in 2015 – the latest year for which WMO globbal figures are available – and will not fall below that level for many generations to come because of the long-lasting nature of CO2.

Noteworthy extreme events in 2016 included severe droughts that brought food insecurity to millions in southern and eastern Africa and Central America, according to the report.

Hurricane Matthew caused widespread suffering in Haiti as the first category 4 storm to make landfall since 1963, and inflicted significant economic losses in the United States of America, while heavy rains and floods affected eastern and southern Asia.

WMO has issued annual climate reports for more than 20 years and submits them to the Conference of the Parties of the Framework Convention on Climate Change. The annual statements complement the assessments reports that the Intergovernmental Panel on Climate Change (IPCC) produces every six to seven years.

It is presented to UN member states and climate experts at a high-level action event on Climate Change and the Sustainable Development Agenda in New York on 23 March.

“The entry into force of the Paris Agreement under the UN Framework Convention on Climate Change on 4 November 2016 represents a historic landmark. It is vital that its implementation becomes a reality and that the Agreement guides the global community in addressing climate change by curbing greenhouse gases, fostering climate resilience and mainstreaming climate adaptation into national development policies,” said Taalas.

“Continued investment in climate research and observations is vital if our scientific knowledge is to keep pace with the rapid rate of climate change.”

Newly released studies, which are not included in WMO’s report, indicate that ocean heat content may have increased even more than previously reported. Provisional data also indicates that there has been no easing in the rate of increase in atmospheric carbon dioxide concentrations.

“Even without a strong El Niño in 2017, we are seeing other remarkable changes across the planet that are challenging the limits of our understanding of the climate system. We are now in truly uncharted territory,” said World Climate Research Programme Director David Carlson.

At least three times so far this winter, the Arctic has witnessed the Polar equivalent of a heat-wave, with powerful Atlantic storms driving an influx of warm, moist air.

“This meant that at the height of the Arctic winter and the sea ice refreezing period, there were days which were actually close to melting point. Antarctic sea ice has also been at a record low, in contrast to the trend in recent years.”

According to WMO, scientific research indicates that changes in the Arctic and melting sea ice is leading to a shift in wider oceanic and atmospheric circulation patterns. This is affecting weather in other parts of the world because of waves in the jet stream – the fast moving band of air which helps regulate temperatures.

In the US alone, 11,743 warm temperature records were broken or tied in February, according to the US National Oceanic and Atmospheric Administration.