ROME/COLOMBO, Mar 22 2017 (IPS) - Developing countries struggling to cope with huge volumes of human waste may finally get some relief, and a new business opportunity. 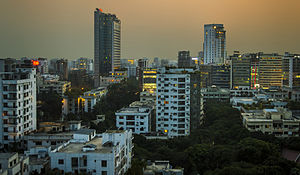 Dhaka grew into a metropolitan area with a population of more than 15 million and the world’s 3rd most densely populated city. Credit: Ahnaf Saber. Creative Commons Attribution-Share Alike 4.0 International license.

A new Consortium of International Agricultural Research Centers (CGIAR) study has found that spreading the cost of waste removal over a series of monthly payments could make costs more affordable for poor households and also help kick-start the conversion of this waste, or fecal sludge, into profitable by-products, like fertilisers and bioenergy.

Published this week in the journal PLoS ONE, the study focuses on the rural sub-district Bhaluka in Bangladesh, where the government is looking to pilot an innovative local service for sludge management.

Currently, households struggle to pay a large lump sum of 13 dollars every 3-4 years to empty their pit latrines, which is approximately 14 per cent of their monthly income.

Instead, the study has found that they could pay small monthly payments of as little as 0.31 dollars per month, or about what they spend monthly on a mobile phone service, over the same period.

“The way that sludge is currently collected is both inefficient and unsafe,” says the study’s first author Soumya Balasubramanya, a scientist with the International Water Management Institute (IWMI), which leads the CGIAR ResearchProgram on Water, Land and Ecosystems (WLE).

“Our study reimagines the economics of waste collection, disposal and reuse from the ground up. Rather than collecting waste on an ad hoc basis, our system would build a strong, guaranteed consumer base and a steady flow of capital, which would allow waste collection businesses to invest in improving their equipment and services.”

Despite Bangladesh making rapid progress in rural sanitation, having built about 40 million pit latrines, a financially viable solution for emptying these pits, and transporting the sludge to a central location for treatment has not yet been found, adds Balasubramanya.

“When pits fill up, households currently hire someone to empty them, but this service creates health and environmental problems by dumping the sludge close by, as no central treatment plants exist yet,” comments Rizwan Ahmed, a co-author of the study with Bangladesh’s NGO Forum for Public Health.

“If sludge removal could be offered on a subscription basis, the cost would be more manageable for households, and critically it would help streamline the logistics of taking the sludge safely away for treatment, preventing contamination of groundwater and the spread of infections.”

The study concludes that households are willing to cover at least half the costs of the proposed system, while the remainder may initially need to be funded by the government.

However, revenue from the sale of waste by-products like fertiliser and energy may offer another potential source of funds in the future.

The study’s results have already helped bring this issue to the attention of top policymakers and influenced the development of Bangladesh’s first regulatory framework for fecal sludge management.

“It’s very encouraging to see the government now turning its attention to the challenge of managing the fecal sludge that on-site sanitation generates” said Jeremy Bird, director general of IWMI.

“Our research has shown that a very simple concept like cost-spreading can put the critical transportation link in the sanitation chain on a firm financial footing.”

“Until this study, we knew next to nothing about those costs and people’s willingness to pay them in rural areas,” said Balasubramanya.

“This information will help governments and entrepreneurs design financially viable systems to manage sludge from on-site latrines, not only in Bangladesh but elsewhere around the world.”

“The proposed system would offer clear benefits for individuals – convennience, privacy and better health – and that’s why they’re willing to pay,” explains Ahmed. “But the benefits to society – reduced health risks and less environmental pollution – would be even greater.”

The release of the study coincided with World Water Day on 22nd March, which this year will focus on the pressing issue of wastewater management.

According to UN-Water 80 per cent of all wastewater, including fecal sludge, gets dumped without treatment, leading to a range of health and environmental risks.

The problem is especially grave in the expanding cities and overpopulated rural areas of low-income countries, where only 8 per cent of wastewater is treated.