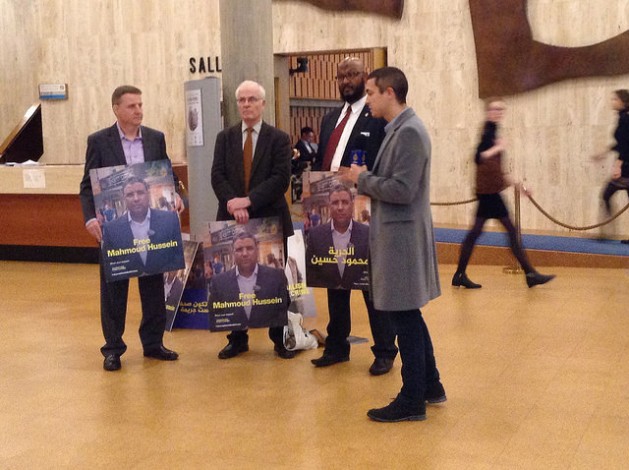 Journalists call for the freeing of a colleague at a UNESCO colloquium in Paris. Credit: A.D. McKenzie/IPS

PARIS, Mar 24 2017 (IPS) - With widespread attacks on professional journalists and the rise of a fake-news industry, media experts agree that journalism is increasingly under fire. But how can the press fight back and ensure its survival?

Judging by the stubbornly defiant tone at a one-day colloquium held at UNESCO’s Paris headquarters on March 23, there may still be reason for hope in a media landscape ravaged by the killings of journalists, verbal abuse of reporters, job losses, low pay and “alternative facts”.

The business model that has long served the press in general is changing, and the sector is universally scrambling to adapt in ever-transforming terrain.

“When [U.S. President] Trump said that the media is the enemy of the people, it’s perfect for journalism,” said Vicente Jiménez, director-general of the Spanish radio network Cadena SER. “We can eradicate some bad practices. It’s a great opportunity.”

Jiménez was one of several media professionals calling for journalists to clean up and protect their own sector, during the colloquium titled “Journalism Under Fire: Challenges of Our Times”.

“Journalism used to be a pillar of democracy,” Jiménez said. “But that model is changing with social media.”

He said the dependence on “clicks” for on-line-media income was leading to “stupid” and “vile” stories, and he told participants that the three most-read stories in Spain over the past year were fake ones. He warned that the media would lose its relevance if this situation continued.

Carlos Dada, co-founder and editor-in-chief of El Faro digital newspaper, based in El Salvador, stressed that a distinction had to be made between “media” and “journalism”. As an example, he said that during a certain period in his country, journalism was under fire while media companies grew rich, partly by being politically compliant and going about business as usual.

Dada said that technology was “not only a threat” but that it was also a “huge opportunity” in areas such as using data in investigative stories, for which El Faro is known in Latin America.

Still, the business model that has long served the press in general is changing, and the sector is universally scrambling to adapt in ever-transforming terrain, participants pointed out.

According to UNESCO, “technological, economic and political transformations are inexorably reshaping” the communications landscape.

“Major recent elections and referenda have raised many questions about the quality, impact and credibility of journalism, with global significance,” the agency said.

In organizing the colloquium, UNESCO said it hoped to “strengthen freedom of expression and press freedom, since modern societies cannot function and develop without free, independent and professional journalism”.

As some panellists noted, however, many journalists work under political dictatorship – in countries that are United Nations member states – and they “pay with their lives” or with their liberty for telling the truth, as one speaker put it.

UNESCO statistics show that more than 800 journalists have been killed over the past decade, and although the agency has been working with governments and the press on ways to end impunity for the killers of media workers, attacks on journalists continue on a daily basis.

Yet killing, imprisoning or abusing the “messenger” is only one aspect of the assault on professional journalism. The dissemination of so-called fake news, with “mainstream” media companies sometimes involved, has led to confusion among the public about what is real and what is false and contributes to the overall distrust of the press.

While critics have particularly slammed social media company Facebook for its role in spreading false news stories, the company is adamant that the responsibility lies with its users.

“You’ll see fake news if you have signed up to fake news sites,” said Richard Allan, a former politician and Facebook’s Vice President of Policy for the European, Middle East and Africa (EMEA) region, who participated in the colloquium.

Explaining how the company’s “algorithm” works for showing content, Allan said that the “vast majority” of what users saw in their feed was the “sum” of material to which they connected.

He told the colloquium that Facebook was trying to address the issue of fake news, but he added: “We don’t want to be the world’s editor.”

If Facebook is unwilling to be a gatekeeper, who would take action though, asked Maria Ressa, a former CNN correspondent and now editor-in-chief and CEO of on-line news site Rappler in the Philippines.

“We have not only misinformation … we have disinformation,” she said, describing the deliberate spreading of false stories in targeted attacks against individuals, groups or policies.

For Serge Schmemann, a New York Times writer and editor, “fake news is more a symptom than the real problem”. A crucial issue is how journalists are now expected to produce news, with often too little time or resources to work on an in-depth story.

But, said Schmemann, “We will adapt, we will survive… We have to remain honest reporters.”

A key to survival may be getting the public involved, according to David Levy, director of the Reuters Institute for the Study of Journalism.

In an interview on the sidelines of the colloquium, he told IPS that for professional journalism to continue, it will have to get people to value the service enough to pay for it.

“Sometimes ordinary people see journalists as part of the problem, rather than the solution, and journalists have to change this image by getting rid of bad ethics and practices,” he said.

Financial support is already a possibility through crowd-funding, subscriptions and philanthropy, Levy said. In addition, the proper functioning of publicly funded media – where politicians refrain from interference while still holding the media accountable – was an essential part of the solution, he added.

Despite all these views and the organizing of one conference or colloquium after another (there will be a slate of them on World Press Freedom Day, May 3), the outlook remains troubling, even dire, for many journalists in the field.

“We don’t have jobs. We’re badly paid,” said Paris-based Burundian journalist Landry Rukingamubiri. “Then there’s fake news and pretend-journalism. Where do we go from here?”