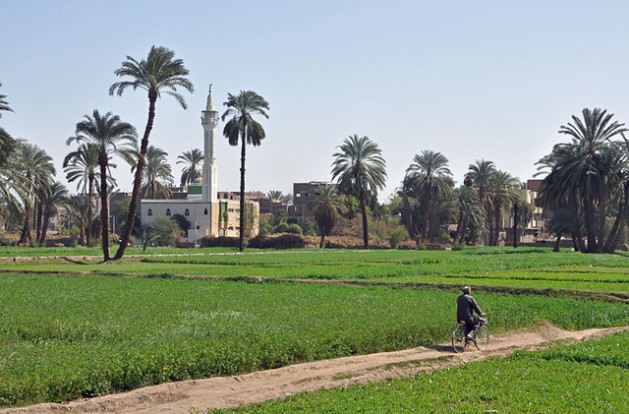 ROME, May 24 2017 (IPS) - Conflict and insecurity remain the key barriers to development progress in the Middle East and North Africa. In Iraq, Libya, Syria, and Yemen, about half the population—around 40 million people—require humanitarian assistance. Across the region, countries depend heavily on food imports. As their populations urbanise and grow, the need for imports will increase.

Dealing with the major challenges facing the Middle East and North of Africa (MENA) social and economic development, the Cairo international experts seminar focused on food import dependency in a region rife with population growth, urbanisation and conflict.

Organised by IFPRI and the Faculty of Economics and Political Science of Cairo University under the theme “Rapid Urbanisation Challenges Food Security in Egypt” the meeting examined the situation in Egypt.

In an interview to IPS, Clemens Breisinger, economist and senior research fellow based in IFPRI’s Cairo office, said that rapidly growing populations and the related increase in food consumption are likely to increase MENA countries’ dependence on food imports.

Countries with sizable agriculture sectors, such as Egypt, Morocco, Sudan, and Tunisia, generally have a low food import dependency ratio of between 10 and 20 per cent—that is, food imports account for 10 to 20 per cent of food consumption, he said.

Nevertheless, the food imports dependency ratio of all other MENA countries exceeds 30 per cent, with Iraq, Mauritania, Oman, and Yemen reaching about 50 per cent, and Gulf countries such as Kuwait and the United Arab Emirates reaching up to 70 per cent, said Breisinger.

According to the researcher, scope remains for increasing agricultural output in the region—but additional land and water resources for crop production are limited; climate change is expected to reduce crop yields; and fast-growing cities are encroaching on (often fertile) agricultural land.

“To ensure future food security, MENA countries should be prepared to import more food from international markets in the near future.”

Asked about the growing water challenges in the region, Breisinger said to IPS that water scarcity is projected to get much more severe in MENA, but there are technical and policy options to avoid disaster.

The food security challenges place an added burden on the available water sources over and above the higher demand brought about by population increases, he said, while informing that by 2050, projections show that global per capita renewable water resources will fall by 25 per cent.

“These pressures vary greatly across different regions of the world. In the Middle East and North Africa, further declines, estimated from 778 m3 to 506 m3 per capita per year, are expected to severely constrain livelihoods and economic development.”

According to Breisinger, possible solutions to mitigate climate change impact on water scarcity include: increasing water use efficiency, and investing in alternative sources of water.

The former can be achieved through investing in improved irrigation schemes and improving wastewater reuse, while the latter includes investing more in desalination technology, water harvesting, groundwater extraction, he explained.

Breisinger added that the share of people living in urban areas is projected to overtake the share living in rural areas in most MENA countries by 2030—with the notable exceptions of Egypt, Somalia, Sudan, and Yemen.

“In combination with population growth and rising incomes, urbanisation can be expected to increase the demand for processed foods. This likely trend provides an opportunity for agroindustry-led economic transformation in the MENA region to generate employment opportunities, improve food security, and reduce poverty.”

Asked about the “the double burden of malnutrition” in MENA, i.e. “over-and-under-nutrition,” he said this has been particularly prevalent in middle-income countries and especially those in the region.

“Egypt faces relatively more pronounced instances of the double burden of malnutrition than other developing countries. For instance, almost every third Egyptian child under five years of age is chronically undernourished, while 78 per cent of all (non-pregnant) ever-married women 15–49 years of age are overweight.”

According to the researcher, addressing these challenges through the reform of existing policies and programs can be expected to make a critical contribution to accelerating the country’s economic and social development.

Many of the economic challenges that Egypt is facing today have for decades been deeply rooted in the country, he said. “To tackle these longstanding issues, such as slow progress in economic diversification and persistently high levels of unemployment and poverty, Egypt recently embarked on a historic economic reform process.”

The year 2016 witnessed several of these reforms, including the imposition of a value-added tax (in August 2016), the floatation of the Egyptian pound (in November 2016), and further reductions in energy subsidies (in November 2016, following the 2014 partial removal of the subsidy,) explained Breisinger.

The Egyptian government estimates current population growth rate of 2.4 per cent, which is double the average of other developing countries. Much of that growth is concentrated in urban areas, with the Cairo metropolitan area expected to grow by half a million people by the end of 2017, more than any other city in the world.

In addition, armed conflict and drought in the region are exacerbating the challenges high growth and urbanisation bring, by adding displaced migrants and refugees to some of the country’s most vulnerable populations, according to the report.

IFPRI was established in 1975 to identify and analyse alternative national and international strategies and policies for meeting the food needs of the developing world, with particular emphasis on low-income countries and on the poorer groups. It is member of CGIAR, a worldwide partnership engaged in agricultural research for development.