A Trump Doctrine of Hypocrisy

UNITED NATIONS, Sep 20 2017 (IPS) - In his first address on the global stage of the General Assembly, United States’ President Donald Trump touted an “America First” approach at the very institution that is meant to inspire collaboration between nations. 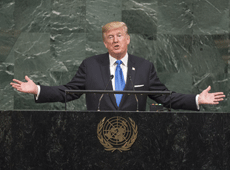 “Our government’s first duty is to its people, to our citizens — to serve their needs, to ensure their safety, to preserve their rights, and to defend their values,” he told world leaders.

But in a global world that relies on each other on issues such as economic growth and environmental protection, can a “me first” approach work?

“To say one country first over the other certainly is not going to deal with these issues,” he told IPS.

Though the President highlighted the need to work together to confront those who threaten the world with “chaos, turmoil, and terror,” his actions seem to imply otherwise.

Starting with withdrawing from the landmark Paris Climate Agreement to tackle global emissions to threatening funding cuts to not only the UN but also to its own State Department which handles diplomacy and foreign assistance, the U.S. seems to be far from working together with the international community.

As Trump received applause upon speaking of the benefits of the U.S.’ programs in advancing global health and women’s empowerment, he has also sought to eliminate such programs including the gender equality development assistance account ambassador-at-large for Global Women’s Issues and has already withdrawn all funds to the UN’s Population Fund.

“Mr. Trump continues on a path that will cost America its global influence and leadership,” she continued.

Martin echoed similar sentiments to IPS, stating: “We talk about working together but we don’t seem to do the things that you need to do to work together, which is making sure you have the right diplomacy, supporting the UN, and supporting other international fora.”

He particularly pointed the U.S.’ refusal to participate and sign the new nuclear ban treaty.

Adopted in July, the treaty on the prohibition of nuclear weapons is now open for signature and will enter into force 90 days after 50 countries have ratified it.

Brazilian President Michel Temer was the first to sign the treaty.

However, the world’s nine nuclear-armed states including the U.S. boycotted the negotiations and announced they do not ever intend to become party to the document.

Instead, President Trump used his address to lambast both North Korea and Iran for their alleged pursuits of nuclear weapons and make war-inciting claims.

“We will have no choice but to totally destroy North Korea,” Trump said.

“It is time for North Korea to realize that the denuclearization is its only acceptable future.”

Martin noted that no country would act kindly to threats of annihilation.

Such threats have instead only served to increase tensions.

The President continued to say that the Iran Deal is the “worst” and most “one-sided” agreements, threatening to withdraw from it.

As nuclear tensions continue escalate, Trump’s threats of war and unwillingness to cooperate gives security to none, particularly not Americans.

U.S. Senator Dianne Feinstein criticized the President for his remarks and noted the hypocrisy in using the UN stage of peace and global cooperation to threaten war.

“He missed an opportunity to present any positive actions the U.N. could take with respect to North Korea…By suggesting he would revisit and possibly cancel the Iran nuclear agreement, he greatly escalated the danger we face from both Iran and North Korea,” she said.

“He aims to unify the world through tactics of intimidation, but in reality he only further isolates the United States.”

Martin highlighted the importance of diplomacy rather than intimidation.

“Diplomacy is the hardest thing. It is harder to get together at a table and work on a deal but that’s what needs to be done.”

President Trump did express his support for the UN and its work, citing former President Harry Truman who helped build the UN and made the U.S. the first nation to join the organization.

He referred to Truman’s Marshall Plan which helped restore post-World War II Europe, but still went on to urge nations to “embrace their sovereignty.”

However, it was Truman that spoke of a “security for all” approach during a conference which established the UN Charter in 1945.

He urged delegates to use this “instrument for peace and security” but warned nations against using “selfishly,” stating: “If any nation would keep security for itself, it must be ready and willing to share security with all. This is the price which each nation will have to pay for world peace.”

“Out of this conflict have come powerful military nations, now fully trained and equipped for war. But they have no right to dominate the world. It is rather the duty of these powerful nations to assume the responsibility for leadership toward a world of peace.

That is why we have here resolved that power and strength shall be used not to wage war, but to keep the world at peace, and free from the fear of war.”