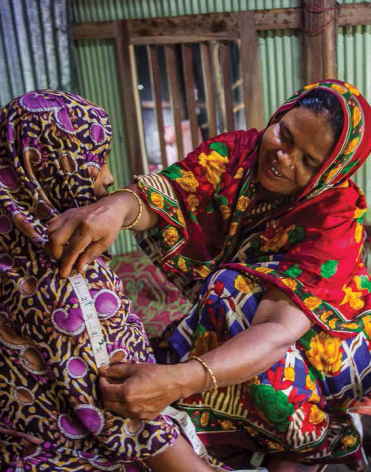 ROME, Dec 4 2017 (IPS) - At an event held on October 29 at the International Fund for Agricultural Development (IFAD) Gender Awards 2017, five countries were honored for impressive achievements in gender equality and women’s empowerment despite harsh conditions and numerous daunting situational and societal obstacles. The five countries are Bangladesh, Mozambique, Colombia, Morocco, and Mauritania. The IFAD supported projects in these countries have ambitious goals for a more egalitarian future. To date these projects have successfully provided women with decision-making opportunities, skill training, and increased autonomy through the development of their own livelihoods.

With empowerment comes greater individual and collective confidence, influence, and overall happiness which contributes to the vitality of households and communities. There is still much to be achieved, however these projects have yielded numerous positive results worthy of the utmost praise.

Mozambique’s Rural Markets Promotion Programme empowered women to join farmer organizations where they now have equal membership as men. Women have increased their revenue by connecting to markets and even becoming community leaders.

Throughout homes in Mozambique women and men are rewriting embedded household gender roles through the Gender Action Learning System (GALS).

Men are not only warming to the idea of sharing women’s domestic workloads, they are seeing the benefits, Mario Quissico, Gender focal point, PROMER, explained, “It is very exciting hearing men say, we are happy because harmony at home has increased. We are working as a family, we are contributing to activities which we thought were for women.”

Vital to women’s security in Bangladesh, especially after the recent resettlement on the coastal islands, is the Char Development and Settlement Project’s initiative for women and men to own equal amounts of land.

The Deputy Team Leader of the project, Md. Bazlul Karim, clarified that even women without husbands are protected, “50% goes to the woman and 50% to the man. If there is a single woman who is the head of a family she will get 100% of the land.”

In Colombia , Building Rural Entrepreneurial Capacities Programme: Trust and Opportunity or TOP believes that empowering women is absolutely essential to the country’s peace. They are helping poor, vulnerable women who are heads of households by providing training and incentives to create their own incomes. Some have even embraced the male-typical endeavor of raising livestock.

Morocco’s Agricultural Value Chain Development Project in Mountain Zones of AL-Haouz Province have encouraged women to get training in businesses with local products like wool, olives, and apples. Coined the “two-sheep initiative,” women have started their own businesses by acquiring two sheep.

There is also a focus on female-run small businesses in Mauritania where the Poverty Reduction Project in Aftout South and Karakoro supports women’s micro projects.

Easier access to drinking water has also been a vital part in improving the lives of women and reducing poverty. With fresh water closer, women save as many as five hours each day which they can instead use to earn money.

All of these projects are combating gender inequality and have given women the ability to make decisions and take positions of power in families and communities. These advancements positively influence entire societies.

The Coordinator of Mauritani’s project, Ahmed Ould Amar, emphasized, “We are reaching 281 villages and working with 19,000 households. This is quite huge, so obviously when you are working at this type of scale you have economic, social, and organizational impacts on society.”

Not only have these projects been working tirelessly from the ground up and in turn improving gender equality in society, they are securing it for future generations.

Young people in Colombia are being protected by the project’s encouragement of entrepreneurial women to work with young people and include them in their empowerment.

According to Ahmed Ould Amar, young women are being heard in Mauritania, “We’ve got this diagnosis process at field level that always includes a group of young people and women so we can hear what their problems are.”

A school, which also ingeniously acts as a shelter from cyclones, has been created in Bangladesh and many young girls are being educated for the first time.

In Mozambique women who were previously illiterate are being taught to read. They can perform previously impossible tasks such as understanding forms at the hospital so they can help their children flourish.

While women have begun generating income in Morocco, young girls have been able to remain in school. Some have even gone on to University.

In all five of these countries, women are taking on leadership positions and becoming role models for younger generations. The freshly ingrained demand for gender equality and a belief that the empowerment of women ensures a more stable present and successful future allows for young girls to grow up into vibrant women who improve society.